(Minghui.org) Falun Gong practitioners in Malaysia held activities in downtown Kuala Lumpur on April 25 and April 26, 2019, commemorating the 20th anniversary of the April 25th Appeal. Practitioners did the Falun Gong exercises as a group, displayed large banners calling for an end to the Chinese Communist Party (CCP), and held a candlelight vigil in memory of fellow practitioners who have died during the persecution. As part of the commemorative activities, practitioners submitted a letter of protest to the Chinese Embassy in Malaysia on April 20. 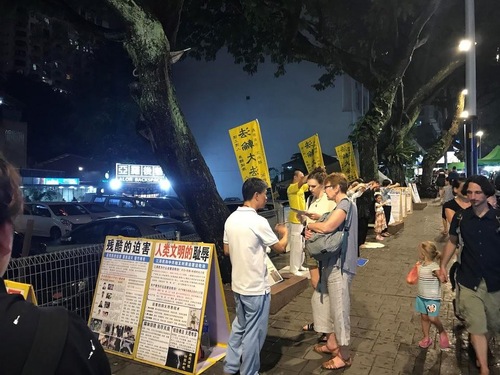 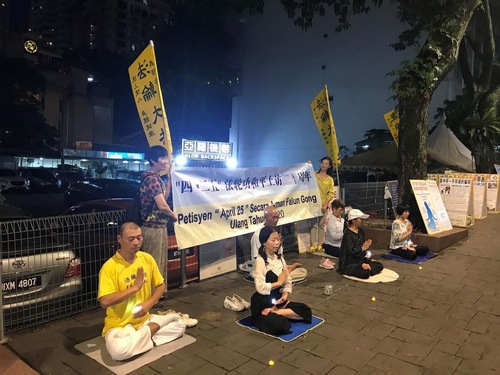 Practitioners did the Falun Gong exercises as a group on Alor Street, a popular area for tourists in the Golden Triangle District, on both evenings. Their large banners read: “20th Anniversary of the April 25th Appeal” “Stop CCP's Organ Harvesting” and “Falun Dafa Is Great.” After sunset, practitioners lit up lotus flower lamps and mourned fellow practitioners who were murdered by the CCP. Despite the CCP's Internet blockade, information sent to the Minghui website has confirmed the deaths of 4296 practitioners and hundreds of thousands of cases of illegal arrests, detention, and torture. Countless families have been broken apart due to the pressure of the persecution.

The solemn scene in Kuala Lumpur attracted the attention of crowds of people. Tourists from China read the display boards and watched the activities. Some Chinese tourists took pictures with their cell phones.

Mr. Song was one of the 10,000 Falun Gong practitioners who participated in the April 25th Appeal in Beijing 20 years ago. He recalled his experience: “Falun Gong practitioners from all over the country went to Fuyou Street [the location of the National Appeal Office] starting from 7 a.m. that day. They stood along the street quietly and in an orderly fashion. Those in the front row made room on the sidewalk for pedestrians. The elderly sat in the back to rest or meditate. The younger people stood in the front.

"We maintained our order without noise. It was a natural reflection of our following Truthfulness-Compassion-Forbearance. My memory of the appeal has remained vivid through the 20 years that have passed. I was standing about 30 meters north of the west door of the Zhongnanhai Compound. I saw Prime Minister Zhu Rongji and a few government officials come out of the door just after 9 a.m. They talked with Falun Gong practitioners. A few practitioners followed them into Zhongnanhai. I was very excited.”

Twenty years have passed, and the Chinese regime has failed to eradicate Falun Gong. Instead, Falun Gong has spread to more than 100 countries around the world and been embraced by people everywhere. It's a testament to the fact that evil can never conquer the righteous.

Falun Gong practitioners in Malaysia are determined to continue calling for an end to the persecution until it stops. They will continue to clarify the facts about Falun Gong and help Chinese people quit the communist organizations and choose a bright future for themselves.

“Sentenced to Six Years for His Faith, Liaoning Man Dies 9 Months after Being Released on Medial Parole”