(Minghui.org) Senate Concurrent Resolution (SCR) No. 6 was voted on by the Missouri House of Representatives on May 15, 2019, making the resolution officially passed by the Missouri State Legislature.

While previous versions of this resolution were passed by the Missouri House of Representatives in 2017 and the Missouri Senate in 2018, it must be voted on by both the Senate and House within the same 5-month legislative session to be finalized as a concurrent resolution.

“It is long overdue and the fight continues,” said Sen. Jill Schupp, sponsor of SCR 6, which was passed unanimously by the Senate on February 21. “Here in the state of Missouri, we cannot stand for these human rights violations,” she said. 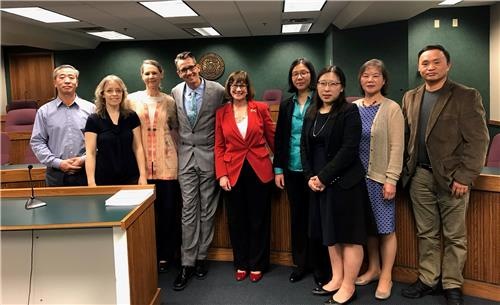 “This is an important issue and I'm glad that I could help,” said Sen. Dave Schatz, who not only voted for the resolution on the floor and in the Senate Rules Committee, but also dedicated one of his weekly newsletters to the topic of forced organ harvesting from Falun Gong and other prisoners of conscience in China.

The resolution cites a 600-page investigative report, which estimates that China has been performing 60,000 to 100,000 transplants each year without a formal donation system. It also indicated that China's dramatic rise in organ transplants correlated with the start of the persecution of Falun Gong in July 1999.

Falun Gong, also known as Falun Dafa, is an ancient spiritual meditation discipline with three core values: Truthfulness, Compassion, and Forbearance. It attracted nearly 100 million practitioners in China within a few years of its public introduction in May 1992 and has thus become the largest group of prisoners of conscience in China since the onset of the unprecedented campaign designed to eradicate the practice from China.

SCR 6 also calls for the Chinese government to end the persecution of the Falun Gong and release all Falun Gong practitioners.

During the hearing for SCR 6 by the House Homeland Security Committee on April 9, 2019, Chairman Ron Hicks was moved by the testimony of victims of the persecution. “I'm speechless,” he said, after listening to the testimony of a biology researcher from St. Louis who had survived brutal tortures and whose wife was tortured to death for practicing Falun Gong in China in 2003.

Rep. Hicks indicated that he thought the resolution was meaningful and would have a great impact. With sincere enthusiasm, he said, “This is what we [the government] are here for!”

SENATE CONCURRENT RESOLUTION NO. 6Whereas, extensive and credible reports have revealed mass killing of prisoners of conscience in the People's Republic of China, primarily practitioners of the spiritual based exercises of Falun Gong, but also other religious and ethnic minority groups, in order to obtain organs for transplants; andWhereas, the organ transplantation system in China does not comply with the World Health Organization's Guiding Principles of traceability and transparency in organ procurement pathways, and the government of the People's Republic of China has resisted independent scrutiny of the system; andWhereas, traditional Chinese custom requires bodies to be preserved intact after death. With rare voluntary organ donation, however, China's transplantation industry significantly increased since 2000; andWhereas, the 2017 Freedom House Report "The Battle for China's Spirit" states that "Available evidence suggests that forced extraction of organs from Falun Gong detainees for sale in transplant operations has occurred on a large scale and may be continuing"; andWhereas, an investigative report, published in June 2016, conducted by human rights attorney David Matas, former Canadian Secretary of State for Asia-Pacific David Kilgour, and journalist Ethan Gutmann, estimated that China is performing 60,000 to 100,000 transplants per year as opposed to 10,000 transplants claimed by the Chinese government, which is "an industrial-scale, state-directed organ transplantation system, controlled through national policies and funding, and implicating both the military and civilian healthcare systems"; andWhereas, China's Liver Transplant Registry System indicated that more than 25% of cases were emergency transplants, for which an organ was found within days or even hours. Wait times for nonemergency liver transplants were usually quoted in weeks. Most patients in other countries have to wait years for a transplant; andWhereas, the Chinese government claims that 90% of China's organ transplant sources come from executed prisoners. However, the number of executions has dropped 10% annually since 2002 and is far less than the number of transplants taking place. The government has never acknowledged the sourcing of organs from prisoners of conscience; andWhereas, Falun Gong, a spiritual practice involving meditative "qigong" exercises and centered on the values of truthfulness, compassion, and forbearance, became immensely popular in China in the 1990s, with multiple estimates placing the number of practitioners at upwards of 70 million; andWhereas, in July 1999, the Chinese Communist Party launched an intensive, nationwide persecution designed to eradicate the spiritual practice of Falun Gong, including physical and mental torture, reflecting the party's long-standing intolerance of large independent civil society groups; andWhereas, since 1999, hundreds of thousands of Falun Gong practitioners have been detained extralegally in Chinese reeducation-through-labor camps, detention centers, and prisons, where torture, abuse, and implausible medical exams and blood tests on Falun Gong practitioners are routine; andWhereas, Freedom House reported in 2015 that Falun Gong practitioners comprise the largest portion of prisoners of conscience in China, and face an elevated risk of dying or being killed in custody; andWhereas, the United Nations Committee Against Torture and the Special Rapporteur on Torture have expressed concern over the allegations of organ harvesting from Falun Gong prisoners, and have called on the Government of the People's Republic of China to increase accountability and transparency in the organ transplant system and punish those responsible for abuses; andWhereas, in June 2016, the U.S. House of Representatives unanimously passed House Resolution 343, condemning the systematic, state-sanctioned organ harvesting from Falun Gong and other prisoners of conscience; andWhereas, the killing of religious or political prisoners for the purpose of selling their organs for transplant is an egregious and intolerable violation of the fundamental right to live; and Whereas, organ tourism to China should not be shielded by medical confidentiality, but openly monitored. No nation should allow their citizens to go to China for organs until China has allowed a full investigation into organ harvesting of prisoners of conscience, both past and present:Now Therefore Be It Resolved that the members of the Missouri Senate, Ninety-ninth General Assembly, Second Regular Session, the House of Representatives concurring therein:(1) Call upon the Government of the People's Republic of China to immediately end the practice of organ harvesting from all prisoners and prisoners of conscience, and explicitly from Falun Gong prisoners of conscience and members of other religious and ethnic minority groups;(2) Call upon the Government of the People's Republic of China to immediately end the 17-year persecution of the Falun Gong, and the immediate release of all Falun Gong practitioners and other prisoners of conscience;(3) Call upon the President of the United States to undertake a full and transparent investigation by the United States Department of State into organ transplant practices in the People's Republic of China, and calls for the prosecution of those found to have engaged in such unethical practices;(4) Encourage the medical community of Missouri to engage in educating colleagues and residents of Missouri about the risks of travel to China for organ transplants so as to help prevent Missouri residents from unwittingly becoming involved in murder in the form of forced organ harvesting from prisoners of conscience; and(5) Agree to take measures to ban the entry of those who have participated in illegal removal of human tissues and organs, and seek prosecution of such individuals should they be found on the soil of Missouri; andBe It Further Resolved that the Secretary of the Missouri Senate be instructed to prepare properly inscribed copies of this resolution for the President and Vice President of the United States, the President and Secretary of the United States Senate, the Speaker and Clerk of the United States House of Representatives, the chair of the Senate Committee on Foreign Affairs, the chair of the House Committee on Foreign Relations, and each member of Missouri's Congressional delegation.