Reflection on the Twentieth Anniversary of the April 25 Peaceful Protest

They waited quietly and left quickly after being told that the practitioners were released. The orderly protest left a deep impression on the local people and media reporters. 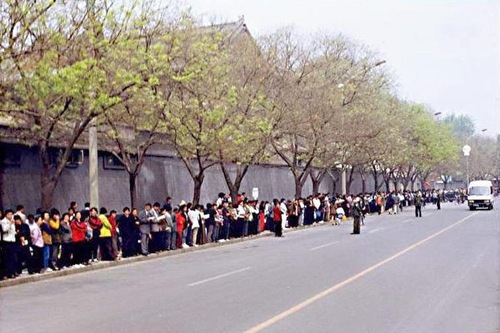 However, the totalitarian Chinese Communist Party (CCP) cannot tolerate any opposing voice. The spokesperson for the Party claimed that no charges would be filed against the arrested practitioners. Instead, the regime authorities were secretly getting ready to launch the nationwide persecution.

Introducing Dafa to the Public

Falun Gong was first introduced to the public in Changchun, Jilin Province in 1992. Its effect on improving health and morality led to its widespread popularity. One hundred million people began to practice Falun Gong within seven years.

The study group I was in doubled its size within half a year. It was divided into two groups. More group practice sites were set up and also increased in size. One could see people practicing Falun Gong in parks and other public spaces.

A lady practitioner said, “I feel like shouting in public – come and practice Falun Gong. It is so good!”

Falun Gong was welcomed by society and admired for uplifting morality. It would have been a once in a lifetime opportunity for the Chinese government to properly handle the peaceful protest and have the country develop in a prosperous and healthy way.

Launching and Escalating the Persecution

Unfortunately, the totalitarian CCP cannot accept anything that is seen as undercutting its power. Jiang Zemin, the then head of the CCP, launched the persecution out of jealousy on July 20, 1999. It was known that Falun Gong practitioners have no political aspirations, and were no threat to its power.

With violence and lies, the CCP has persecuted innocent Falun Gong practitioners since then. Under Jiang’s directive, the CCP established the 610 Office, an extralegal security organization with the power to override the police and judicial systems, and whose sole function is to coordinate and implement the persecution of Falun Gong.

Falun Gong practitioners follow the universal principles of Truthfulness-Compassion-Forbearance. They started truth-clarification to raise awareness of the CCP’s brutal persecution.

Many practitioners went to Beijing to speak for Falun Gong after July 20, 1999. They unfurled Falun Gong banners and stood up for principles of Falun Gong.

However, Jiang and his minions escalated the persecution. To provoke hatred towards Falun Gong, the CCP staged the Tiananmen self-immolation incident and framed Falun Gong.

Many People Need to Awaken to the Truth

The Minghui website published information about the deaths of thousands of Falun Gong practitioners due to the persecution over the past 20 years. The actual number is suspected to be much higher, as many more have been imprisoned and tortured for their faith, but due to the information blockade, much of such information cannot be confirmed.

Twenty years have past. Falun Gong practitioners have remained steadfast in their belief and continue to raise awareness to the public worldwide. Their efforts have awakened the conscience of many people.

Some people have gained an understanding of Falun Gong; some speak out and provide support, some start practicing Falun Gong, and some renounced the Party and its youth organizations. The conscience of many Chinese people awakened when learning about the Party’s true nature. Although many people have accepted the truth of Falun Gong, there are still many who still need to learn about it.