Italy: Practitioners Carry Forward the Spirit of “April 25” by Raising Awareness of the Persecution

(Minghui.org) Falun Gong practitioners in Rome held activities to commemorate the 20th anniversary of the April 25 Appeal and carry forward the spirit of that day's peaceful protest.

April 25 is also significant for Italians because it's Italy's Liberation Day, a national holiday which commemorates the end of the Nazi occupation during World War II. Many families had the day off from work and took a walk on People's Plaza.

Rome is a popular destination for tourists and April is one of it's busiest seasons. Tourists from China, other parts of Italy, and the rest of the world had an opportunity to learn about the persecution in China. Some thanked practitioners for their efforts; others expressed their wish to help end the persecution. 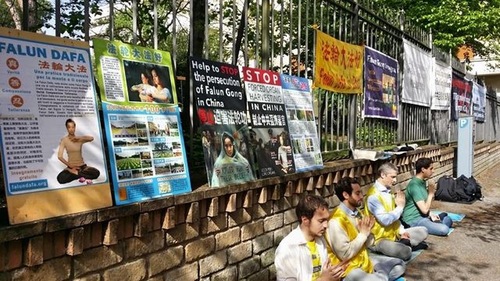 Falun Gong practitioners from Rome organized truth-clarification activities in front of the Chinese Embassy, in recognition of the 20th anniversary of the “April 25” appeal. 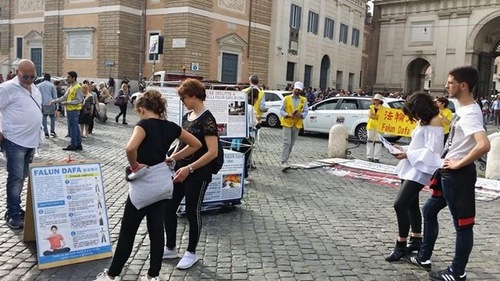 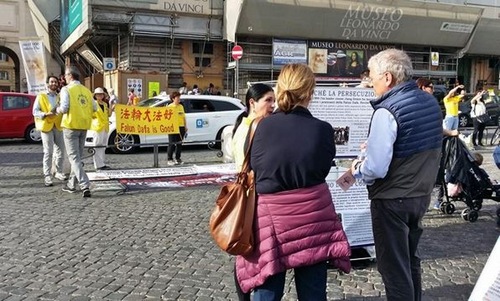 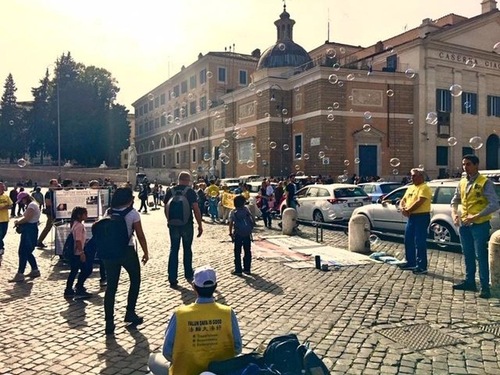 Practitioners talked to passersby about the persecution in China at the People's Square in Rome on April 25, 2019.

Mr. Huang from Singapore read the practitioners' banners. After he read he asked a practitioner to help him to withdraw his membership in the CCP organizations he'd joined.

A Chinese woman wished the practitioners success and said, “I hope you can successfully complete your mission.” A young man from China chatted with practitioners and took a truth-clarification newspaper with him.

A family of four stopped and asked questions. After listening, the mother told her children about the persecution in China. She said that the topic was heavy but important for her children to understand.

An 11-year-old boy joined practitioners as they did the second exercise, the “Falun Standing Stance.” While he learned the exercises his parents spoke with a practitioner and learned about the persecution.

A family from Udine could not understand why such a peaceful practice was being persecuted. After a practitioner explained that the Chinese communist regime felt insecure due to the popularity of Falun Gong and the fact that practitioners practice Truthfulness-Compassion-Forbearance, they understood. They said that it was very important to let people know. They were happy to know that there were Falun Gong practitioners in Udine and said that they planned to learn the exercises.

One young Italian man said that many Italians don't know how truly evil communism is. After a man from Milan was told about the forced organ harvesting, he said, “If we allow such things to happen, human kind is approaching the end.”

“Germany: Rallies in Front of Chinese Consulates in Five Cities Protest the Persecution and Commemorate the April 25 Appeal”