(Minghui.org) April 25, 1999, was a special day in recent Chinese history. Following the arrest of 45 Falun Gong practitioners in Tianjin, about 10,000 practitioners went to Beijing two days later, on April 25, to peacefully appeal for their release and the right to practice their belief unmolested.

Although the issues appeared to be resolved that same day by Zhu Rongji, the premier at the time, three months later, in July 1999, former Communist Party leader Jiang Zemin set in motion the campaign of persecution of Falun Gong. The tragedy that continues to this today has now affected millions of practitioners and their family members.

In honor of the 20th anniversary of this peaceful protest, many practitioners submitted their recollections of the incident to Minghui. Below is one from a practitioner in Tianjin, who was arrested on April 23, 1999, and another from someone who went to Beijing to participate in the appeal on April 25.

An article by He Zuoxiu in Youth Science and Technology Magazine on April 11, 1999, defamed Falun Gong and expressed his opposition to the practice. In response, several dozen practitioners went to the publisher, Tianjin College of Education, between April 18 and 24, to relate how they had benefited from Falun Gong. Staff members at the college initially thanked the practitioners and apologized for the article. But the situation quickly changed. 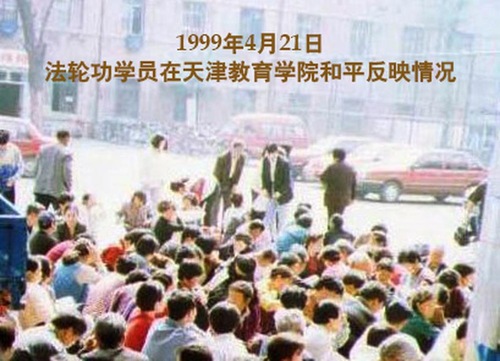 Practitioners going to Tianjin College of Education to clarify facts about Falun Gong on April 21, 1999.

Luo Gan, then head of the Political and Legal Affairs Committee (PLAC), ordered the authorities in Tianjin to dispatch over 300 armed police officers to “deal with” practitioners at the college. Many of the practitioners were assaulted and 45 were arrested. When others went to Tianjin to seek their release, they were told the orders came from Beijing, where they would have to go to get the situation resolved.

“At about 3 p.m. on April 23, 1999, over 20 armed police officers came to the college. They ordered us to leave. The first one thrown out of the college entrance was a male practitioner, followed by many more.

“A male practitioner in the military and I were together. Each of us was restrained by four armed police officers. With our arms twisted behind our backs and necks pressed down, we could not even raise our heads. The officers pushed us into a bus where more officers were standing.

“It took about 10 minutes to get to the police station. They pushed me so hard on the floor that my pants tore. The officers separated us and interrogated us as if we were criminals. We had no place to sit or any water to drink.

“The interrogations continued until 10 p.m. As more practitioners went to the Tianjin City government requesting our release, my fellow practitioners and those I was with were released. The next day, I heard that some practitioners had not yet been let go.”

Note: He Zuoxiu was Luo Gan's brother-in-law. After Jiang Zemin set up the 610 Office under the PLAC to suppress Falun Gong, Luo oversaw the operation of the office while He Zuoxiu was appointed its “academic adviser.”

“Another practitioner called me on the morning of April 24 to tell me what had happened in Tianjin. He asked if I wanted to go to Beijing with him and others to appeal. I contacted group practice site assistants in my city and 20 of us discussed it. We concluded it was wrong for innocent practitioners to be arrested.

“We went by train. Because there was no direct train available, we bought tickets to change in Tianjin. By the time we gathered in Tianjin, there were 36 of us—other family members had decided to come along after hearing about the situation. We arrived in Beijing early on the morning of April 26.

“A practitioner there told us that Premier Zhu Rongji had met with practitioner representatives the day before and agreed with the requests: to release the practitioners detained in Tianjin, to allow Falun Gong books to be published, and to allow people to practice Falun Gong unmolested. Zhu added that doing the exercises had not been forbidden nor would be in the future. We were happy about that and, after doing the exercises with a group in Beijing, we returned home.

“The next day, someone from the police department got us together and asked us questions. While he was surprised by Premier Zhu's response, he said, “Things like what happened in Tianjin would not happen here.” In fact, under orders from their superiors, the police had been monitoring us for several years. Not only did officers exercise and meditate with us, they also installed monitoring devices at the sites. They discovered that the practice did improve their health and that practitioners were very respectful.

“We had a friendly conversation. After the suppression started in July 1999, however, this officer took to me to a detention center because he thought I was a coordinator. He said he was embarrassed to have to do that but he had no choice, he had to follow orders.”

From these two accounts, it is clear that the authorities were very familiar with Falun Gong. By making a personal choice to persecute it, Jiang put the justice system and state in opposition to innocent practitioners as well as to the principles of Truthfulness-Compassion-Forbearance.