(Minghui.org) Two panda bears from China were recently gifted to the Copenhagen Zoo. The Danes and the Danish government questioned the Chinese Communist Party's (CCP) motives. Many referred to the controversial gift as, “Panda Diplomacy.” Falun Gong practitioners held activities at the zoo on opening day. They told people about the CCP's persecution of practitioners in China and called for help to stop the persecution.

An article in the Danish newspaper Information, “The Pandas Are Denmark's Shame,” suggested that China's “iron fists” were hidden behind the two cuddly panda bears and that Denmark's cooperation had legalized China's invasive conduct in exchange for a significant trade agreement. The article said the panda bears symbolize Denmark allowing itself to be subjugated by a dictatorship.

Søren Espersen, chairman of the Danish parliament’s Foreign Policy Committee, said the CCP has already, on many occasions, tried to influence Denmark’s foreign policy in seeking to implement its “one-China policy” by using trade and economic benefits as leverage. “China is trying to wiggle its way in—under the cover of business partnerships. The communist regime has, in recent years, carried out effective political harassment against Denmark,” said Espersen. 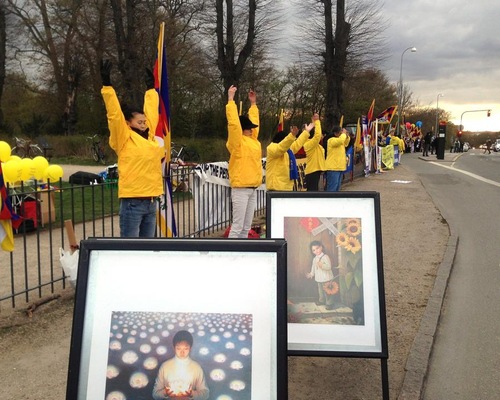 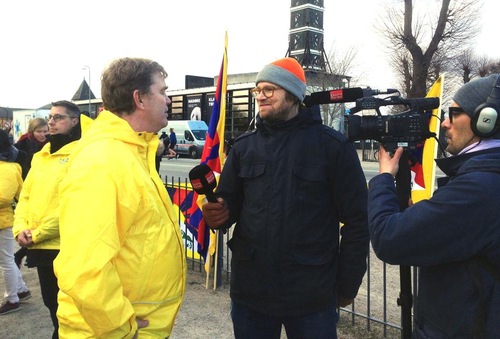 Falun Gong practitioners being interviewed by the media.

The Falun Gong spokesperson in Demark told Ekstra Bladet's reporter, “We would like to send our message to stop the persecution of Falun Gong through the Chinese delegate. We follow the principles of Truthfulness, Compassion, and Forbearance and hope that the torture and persecution in China will soon end.”

While covering the event, DR, the largest TV network in Denmark, talked about the practice of Falun Gong and told its viewers that its practitioners are being persecuted in China. Danish newspaper Politiken, B.T., and other media outlets also interviewed practitioners.

One man took his son to the activities. He told a practitioner, “I saw a report on TV, so I came to support you. I'm against the Communist Party's persecution. We Danes see the motives behind the Panda Diplomacy.”

Ekstra Bladet reported a practitioner's reminder: “Panda bears are sweet, but human rights in China continue to deteriorate. Falun Gong practitioners are arrested and their organs are harvested for profit. The CCP regime uses cuddly pandas to silence criticism. Which is more important? Trade with China or human lives? We are concerned, and that's why we are here.'”

Falun Gong practitioners demonstrated the five exercises and distributed information. Many people stopped to talk and asked about Falun Gong and the persecution. They praised the practitioners for standing by their principles. One gentleman asked, “Can I take a picture of you? Truthfulness-Compassion-Forbearance is wonderful!” The practitioner was wearing a T-shirt printed with the words on the front.

“The Power of Dafa: Recovery from Type B Hepatitis, Surviving a Car Accident, and Saving a Marriage”