(Minghui.org) Today's news from China includes incidents of persecution that took place in 9 cities or counties in 8 provinces, where at least 9 practitioners were recently persecuted for their belief. 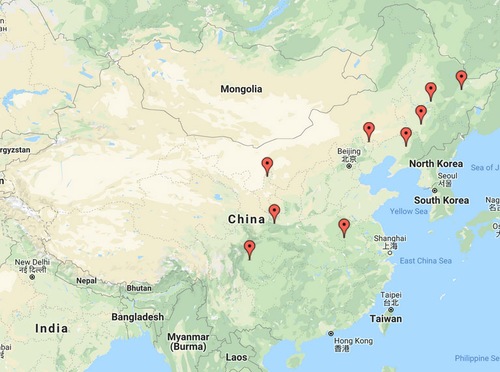 Mr. Zhao Banghai and his wife Ms. Li Changqiu were sentenced to seven years in prison in 2014. Mr. Zhao was incarcerated in the Jiazhou Prison in Leshan City, and Ms. Li in the Chengdu Women's Prison. Mr. Zhao was not allowed to see his family for five years, even though his family went to the prison every year and requested to visit him. Just before the 2019 Chinese New Year his family was allowed to meet with him for the first time since he was imprisoned.

Ms. Zhao Libo was tried in the Daowai District Court on March 11, 2019. The court clerk told Ms. Zhao's family that there will be another trial to verify the dates of computer files. The trial date is yet to be scheduled.

Ms. Li Guihua, nearly 70, is from Chejia Village, Luyuan District. She was arrested by officers from the Luyuan Domestic Security Division in October 2016 and sentenced to five years in prison by the Luyuan District Court in July, 2017. Ms. Li is incarcerated in the Jilin Province Women's Prison, where she has been abused. Guards told the inmates to assault her. She was injured, her blood pressure rose and she suffered heart problems. Ms. Li is forced to write a confession to reveal her thoughts every day and only allowed to wash her clothes once a month.

Mr. Lian Jing, around 70, is from Shenbei District. He will finish serving a three-year prison term on April 26, 2019.

Mr. Lian is a retiree who worked at the Liaoning Geospatial Surveying and Mapping Institute. He was arrested by officers from the Xinchengzi Township Police Station when he was talking to people about the persecution of Falun Gong in Liuwang Village, Shenbei District on April 26, 2016. His home was ransacked. The Shenbei District Court sentenced him to three years in prison on July 27, 2016. He was imprisoned in the Benxi Prison in October 2016. The Liaoning Geospatial Surveying and Mapping Institute stopped his pension immediately after he was sentenced.

Mr. Du Hongyuan was arrested in April, 2016 and sentenced to three years in prison in November 2016. He is imprisoned in the Weinan Prison. His release date is April 3, 2019.

Ms. Dai Jizhen from Linquan County was arrested while distributing Falun Gong fliers on October 22, 2017. After she had been held for 12 days, officers from the Linquan County Domestic Security Division transferred Ms. Dai to the Fuyang City Detention Center on November 4, 2017. The Fuyang Intermediate Court sentenced her to 14 months in prison. She was given six months' home confinement on June 8, 2018 due to her poor health. Ms. Dai was recently taken to the Anhui Province Women's Prison because her health improved.

Ms. Ren Suxiang was tried again by the Yuanbaoshan District Court on March 14, 2019.

Ms. Wang Shuying was arrested at home on the evening of April 8, 2016. She was sentenced to three years in prison and has been imprisoned in the Heilongjiang Women's Prison. Her release date was supposed to be April 7, 2019, but because her arrest date was filed as April 9 by a court officer, her release date was April 8 instead.

“My Whole Family Is Blessed Because I Practice Falun Dafa”

“Home Is Just a Hundred Meters Away”