(Minghui.org) The Art of Zhen Shan Ren (Truthfulness, Compassion, Forbearance) International Exhibition was held in the Federal Senate (the lower house of the National Congress of Brazil) for ten days in March 2019. Twelve deputies sent formal congratulations to mark the exhibition's opening and five deputies sent letters of greeting.

Pressured by the Chinese Embassy, the exhibition ended two days earlier than scheduled. This act revealed the Chinese Communist Party's (CCP) pervasive influence abroad and its attempts to suppress the facts of the persecution of Falun Gong. Nonetheless, the exhibition had a big impact on elected officials, Senate staff, and the public. Several deputies were shocked to learn of the CCP's state-sanctioned live organ harvesting from imprisoned Falun Gong practitioners.

Visitors view the Art of Zhen Shan Ren International Exhibition in Brasilia, the capital of Brazil.

Sao Paulo Deputy: Faith Is a Right That God Has Given to Human Beings

Katia Sastre, the Deputy of the State of São Paulo, is also a police officer. When she learned that the CCP uses every level of the state to coerce people to abandon their faith, she shook her head and said, “Faith is the most basic and noble right that God has given to human beings. No regime or organization can stop it.”

Senate staff member Monica couldn't conceal her excitement as she viewed the paintings. She remarked that they conveyed the power of goodness. She told a practitioner, “You all have a kind of affinity that makes me enjoy being with you.”

Monica said that she planned to go to the local park to learn the Falun Gong exercises. She said, “This exhibition and your efforts are a huge gift. Thank you very much!” 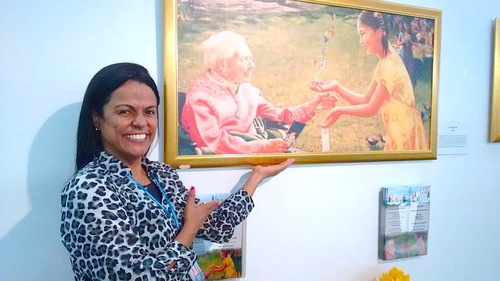 Monica was moved by the artworks.

Another Senate staffer, Erminio, also enjoyed the artworks. For a long time he studied the painting depicting Taiwanese Falun Gong practitioners sitting together in the formation of a large-scale Falun symbol and took a photo of it.

After he heard the history of the Falun symbol he said that he suddenly realized, “My previous understanding [of the symbol] was wrong. The symbol has such a lofty meaning. We really have to re-evaluate our understanding of the world's history.” 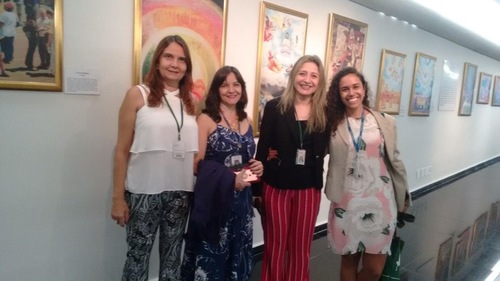 Senate staff members pose for a photograph at the Art of Zhen Shan Ren International Exhibition.

Evelin, who also works in the Federal Senate, had learned about Falun Gong in 2011 when she lived in New York but did not start practicing.

When she saw the painting, The Streets of Manhattan, she was moved and said that she hoped to go to the park to learn the exercises. She also said that she would invite her relatives to see the exhibition. 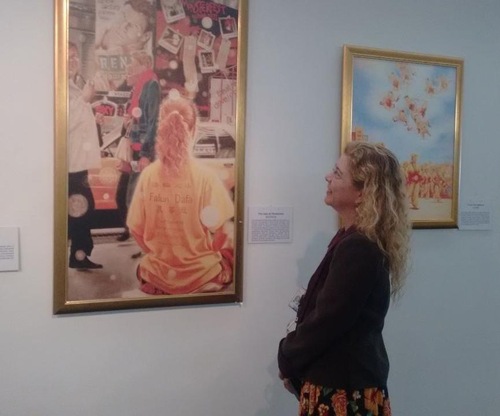 The painting The Streets of Manhattan resonated with Evelin.

Maria Fareide returned several times to see the artworks. She said that each time, she felt different connotations from the paintings. “The colors of these paintings are very penetrating and make me happy,” she noted.

The persecution of practitioners in China saddened her, but she said that justice would definitely prevail. 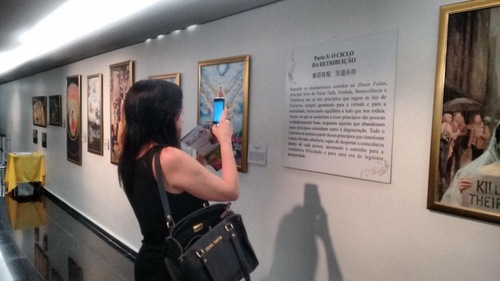 Sandra from the U.S. visits the exhibition.

Sandra Rodrigues, visiting from San Francisco, loved the paintings. She took several photos and said that she would study the information about the artworks. She shared that she was very interested in learning more about Falun Gong and planned to go online to find the nearest park to learn the exercises.