(Minghui.org) Forbes published a report titled “Will We Get To The Bottom Of The Truth On Forced Organ Removal In China?” by Ewelina U. Ochab on March 21, 2019. 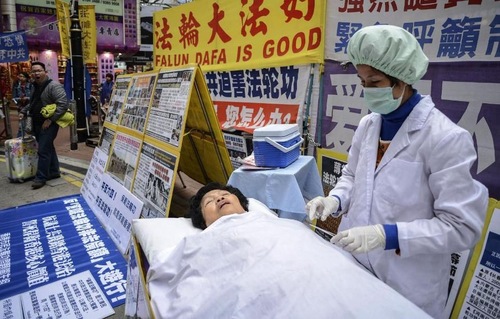 The Forbes article began by mentioning the UN International Day for the Right to the Truth Concerning Gross Human Rights Violations and for the Dignity of Victims.

The author went on to describe the Chinese Communist Party's (CCP) state-sanctioned organ harvesting from living prisoners of conscience, “Over recent years, several researchers (including lawyers and investigators) have been raising the issue of forced organ removal in China, namely, the illegal practice of removing organs from individuals who did not consent to it.”

It continued, “Despite China arguing that there are approximately 10,000 organ transplants being conducted in China per year, all in accordance with the law, researchers suggest that this is far from the truth. Indeed, researchers indicate that the numbers of such transplants are closer to between 60,000 and 100,000 a year, significantly higher than the official Chinese estimate.”

The perpetrators of the crime are officials of the CCP, acting in collaboration with surgeons, prison authorities, and military officials.

Researchers found that most of the organs were obtained through illegal forced organ harvesting from prisoners of conscience, including Falun Gong, Tibetan Buddhists, Uighurs, and house Church Christians.

The prisoners of conscience die from the forced organ removal, or more accurately, they are being killed in the process.

The report stated that the issue of forced organ removal gained some attention in the European Parliament, the U.S., Canada, the UK, and many other countries. One of the most significant challenges is the lack of evidence, as victims of the forced organ removal are cremated.

The report further stated that the China Tribunal, an independent people's tribunal, has begun to inquire into the issue of forced organ removal in China. The tribunal has heard from several witnesses, who provided important elements about the practice.

The Search for Witnesses and Evidence

“Other, non-Falun Gong practitioner prisoners didn't have to go through this. At that time I already knew that the medical check-ups were not for our health. After the exams, I discovered that some practitioners had disappeared. I didn’t know where they went… I never heard from the practitioners who were transferred.”

“I understood the reason for these medical tests after I heard about the CCP harvesting organs from living Falun Gong practitioners. Then I understood the depth of their deceit.”

The article went on to say that this was not an isolated statement, and that similar medical examinations were witnessed by other Falun Gong practitioners.

The China Tribunal is looking for more witnesses and evidence, and plans to deliver its final judgment in June.

The article stated that UK Parliamentarians also took steps based on information about the issue and called on the UK government to take action and investigate it.

It is hoped that “The work done by the China Tribunal and UK Parliamentarians may shed more light on the situation of prisoners of conscience in China and honor the memory of the victims in this way.”

The article ended by saying, “...for the dignity of the victims, in the past and in the future, we must investigate and seek truth with the ultimate goal of stopping such gross human rights violations.”