(Minghui.org) When the Chinese Communist Party began to persecute Falun Gong in July 1999, there were about 100 million practitioners from all walks of life, including college professors, business professionals, workers, and peasants. During the suppression, many of them were arrested, confined in forced labor camps, and inundated with hate propaganda in brainwashing sessions.

Besides the physical abuse, physiological torture is also used to force practitioners to give up their belief in Falun Gong and its principles of Truthfulness-Compassion-Forbearance.

We will address three types of psychological torture: waterboarding with chilled water, starvation, and deprivation of toilet use.

Waterboarding, also called simulated drowning, is one of the most brutal torture methods known to mankind.

At Masanjia Labor Camp in Liaoning Province, the practitioner's limbs are tied up, and the mouth is stuffed with socks and sealed with tape. Guards then pour water on the face. With the mouth covered and limbs restrained, one can only breathe through the nose, which is now filled with water. This easily leads to suffocation, resembling death by drowning. The brain becomes totally blank. 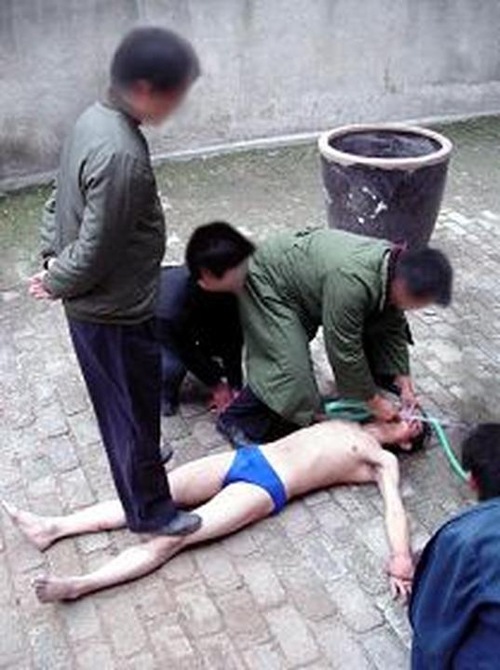 Other prisons, such as Mudanjiang Prison in Heilongjiang Province, were taught this torture method, after which they began to use it on practitioners. Those who were put through this type of torture were reluctant to recall the painful experience because it was too cruel and horrifying.

Another torture method related to water is to remove a practitioner's clothes and open all doors and windows. Then, the persecutor drips chilled water onto the top of the head (baihui acupuncture point). One would feel extremely cold in the beginning and then become numb. Then, the victim feels as if the head is popped open, with the brain being smashed. This type of torture is usually administered over a long period of time, causing more pain than pouring chilled water over the practitioner.

Mr. Wang Xiaozhong from Mudanjiang City suffered the dripping water torture. After being arrested by Yangming police on August 17, 2001, he was beaten and shocked with electric batons. With bruises and wounds all over his body, police kept him at the detention center and continued to torture him with dripping water. He died 12 days after being arrested, at the age of 36.

When his wife visited him the day before his death, Mr. Wang told her that he was shocked with electric batons and that the food was very poor. His family was not notified of his death until one day after he had died. Officials claimed that he died of cerebral bleeding.

Falun Gong practitioners in many places around China are tortured by being placed in a cold environment with no food for one day, two days, one week, or even longer.

Another form of starvation is allowing practitioners to eat but only for extremely short periods of time. In Jiazhou Prison of Sichuan Province, guards often limited their eating time to fewer than 20 seconds. Such a penalty could last for days.

The starvation torture was used on practitioner Mr. Chen Huigen from Chengdu for more than three months, from late January to mid-May 2017.

Mr. Yu Junxiu, a prisoner sentenced to life, learned Falun Gong from an officer in 1997. After the persecution of Falun Gong began in 1999, he was transferred to Mudanjiang Prison, where he was tortured by a number of guards. They often shocked him with electric batons and beat him with plastic pipes.

The worst torture for Mr. Yu was being cold and hungry in the intensification unit. It was cold because no bedding was available. There was no water, and one had to drink water drained from the heating pipe. For each meal, he was given only one or two ounces of steamed buns.

Most inmates would give in after no more than several days of cold and hunger, and they would unconditionally agree to do anything to stop the torture. However, Falun Gong practitioners were often kept in the intensified unit for one to two months or even longer.

Mr. Yu died on August 10, 2003, several days after he was released from the intensified unit. He was less than 40 years old.

Detention in an intensified unit is usually limited to one month to avoid the victim’s death. But practitioners were sometimes detained, released, and then detained again within a few days.

Mr. Huang Guodong was detained in an intensified unit for over six months. After suffering different types of torture, he died on October 31, 2017.

Deprivation of Toilet Use

In addition to waterboarding and starvation, denial of toilet access is another kind of torture often used against Falun Gong practitioners.

According to a Minghui report published in June 2012, Mudanjiang Second Detention Center often limited defecation time to three minutes, while Mudanjiang First Detention Center limited it to two-and-a-half minutes. One would be viciously beaten if one would not get up when the time ran out. As a result, one had to push the waste back and leave the restroom.

Toilet paper was also unavailable, and only one bottle of water was provided for the victim, who had to clean himself or herself using a hand. The process became unimaginably messy and unsanitary.

On top of that, practitioners sometimes were only allowed to use the toilet once a day for urination or once every three days for defecation. This led to health problems and forced victims to urinate or defecate in their pants.

Ms. Liu Jinyu, a 67-year-old practitioner from Liaoning Province was arrested in April 2016 and sentenced to three years and three months at Liaoning Women's Prison.

Guards often added unknown drugs to her food and prohibited her from using the toilet. This led to defecation in her pants and resulted in further mistreatment.

Even after she was sent to the prison hospital in February 2018 in life-threatening condition, her feet were chained, and six guards kept watch over her.

When she needed to go to the restroom at night, guards refused to unchain her feet, forcing her to defecate in her pants again.

She died on April 15, several days after being released on medical parole.