(Minghui.org) The first nine-day Falun Gong seminar of the new year at the Tianti Bookstore in Seoul was held on January 31, 2019. At the end of the nine days, the new practitioners held a roundtable discussion, sharing how they found Falun Gong and discussing their experiences with the practice.

Falun Gong (also called Falun Dafa) is a traditional mind-body cultivation practice from China. The practice involves five gentle exercises, including a meditation, and comprehensive teachings based on the principles of Truthfulness, Compassion, and Forbearance. 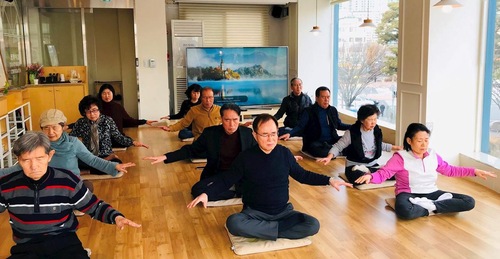 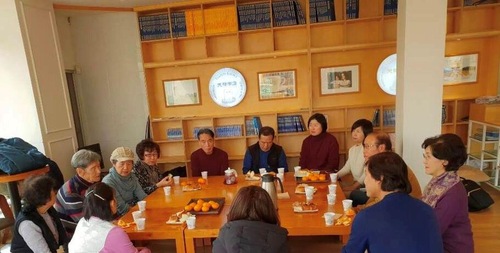 Sharing experiences at the conclusion of the nine-day Falun Gong seminar.

Finding the Meaning of Life

During the economic crisis in South Korea of 1997, Kang, one of the seminar attendees, lost his property. As he struggled financially, he was worried about how he would survive. Then he thought, “Human beings enter the world naked and leave the world naked. What should I be attached to?”

He tried to stay cheerful by reading books, climbing mountains, doing exercises, and going to church. He hoped to find the true meaning of life.

“Although I am just like a tiny speck of dust in the universe,” Kang thought, “I can accept the energy of the universe and become healthy. It is more important to assimilate to the universe than worry about wealth.”

One evening, he saw Falun Gong practitioners doing the exercises near his residence. After reading the Falun Gong flier, he thought, “I should practice Falun Gong.”

He went to the Tianti Bookstore, where he was told that he should read the book Falun Gong, the introductory book about the practice. Kang said, “It was as if I found the purpose of life after reading that book.” So he decided to explore the practice further by participating in the nine-day seminar.

The seminar involves listening to Master Li Hongzhi, the founder of Falun Gong, giving nine foundational lectures, and learning the exercises. As Kang listened to Master's Fa over the course of the nine days, he found that the teachings touched his heart. He understood that through cultivation, the body will be purified, any toxins will be removed, and one's xinxing must improve. He realized how important it is to follow Falun Gong's principles of Truthfulness-Compassion-Forbearance throughout life.

“I felt that cultivation is not simple,” Kang said. “It won't work without being able to endure. I need to practice with a pure mind.”

He used to think about deities. “Now, I feel that I may become a spiritual being by practicing Falun Gong.”

Kang said that he planned to come to the store during his free time to learn more about cultivation practice, read more, and practice hard.

Another new practitioner, Kim saw a woman practicing the Falun Gong exercises in a park one morning. He said, “I felt a strong energy emanating from her, and her hand gestures were so beautiful.”

He said that he became healthy after he took up the practice. He used to be very thin, but now his body weight is back to normal.

“Falun Gong not only benefits one's health,” Kim said, “but is a high-level teaching. I think one can return to good health if one improves one's xinxing when cultivating.”

Kim has experienced a strong sense of spirituality on his cultivation path. He said, “I felt like a divine being when I entered tranquility while doing the fifth exercise, the sitting meditation.”

Seeing the positive changes in her husband, Kim's wife became interested in Falun Gong. She also attended the nine-day seminar. Although she initially thought she'd go for just one day, she attended all nine sessions. She remarked that she looked more beautiful after the nine-day seminar. In addition, she no longer felt discomfort in her back.

Ms. Kang said that she saw Falun Gong practitioners doing the exercises when she was mountain climbing last year. She participated in a nine-day seminar two months later but felt that she needed to learn more. So, she attended another nine-day seminar, then decided to attend a third seminar this past January in Seoul.

She enjoys reading the Falun Gong books during her free time, and when she travels on the subway. She said she has read Master Li's book Zhuan Falun 30 times.

“I feel very happy,” she shared, “when reading the Falun Gong books. They help me assimilate to Truthfulness-Compassion-Forbearance.”