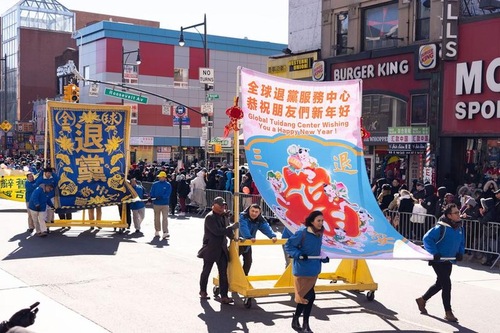 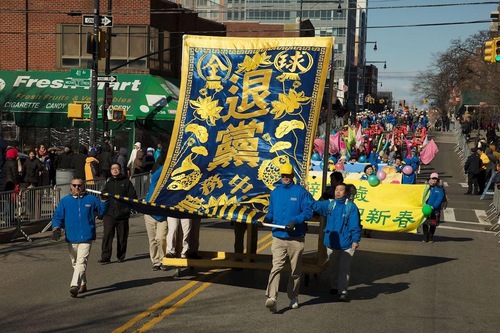 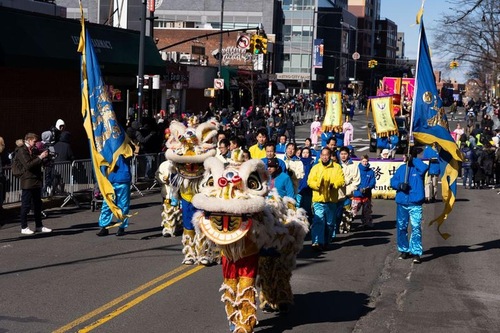 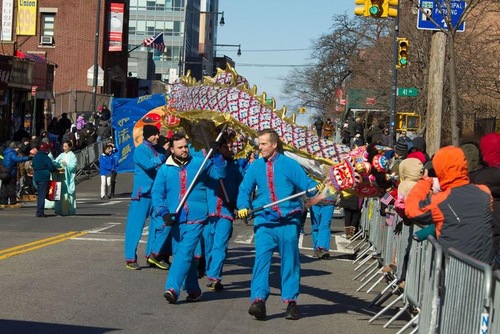 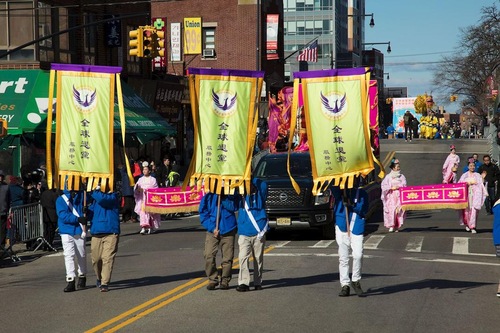 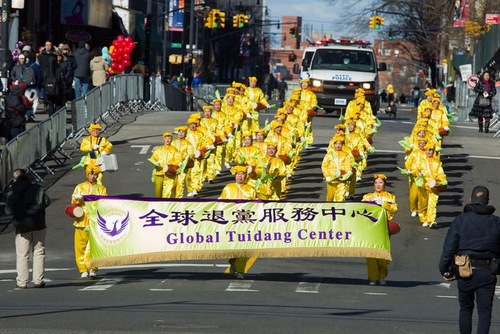 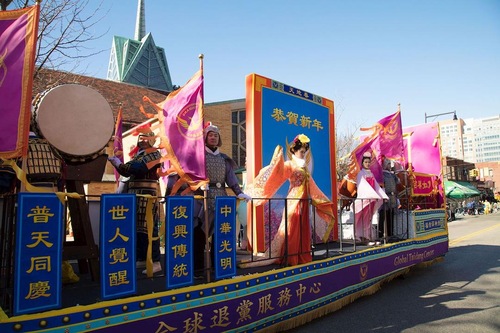 “Many cultures regard the phoenix as a symbol of rebirth,” said Ms. Yi Rong from the Tuidang Center. She said volunteers create a new theme for their float each year. “Every year, we celebrate Chinese New Year with the community and encourage people to quit the communist organizations. China will rise and be reborn like a phoenix after it gets rid of communism.”

Hundreds of people quit the CCP during the parade. As the procession passed, one group of people called out, “Falun Dafa is great! We support Falun Gong!” Practitioners handed them paper lotus flowers and helped them quit the communist organizations. Some said they had quit because they didn't want to be implicated when the Communist Party was brought to justice. Others urged their friends to hurry up and quit.

Some Chinese had been paid to wave CCP flags and shout at the Tuidang Center's entry. After practitioners clarified the facts, many of them accepted the lotus flowers and told volunteers, “We know that following Truthfulness-Compassion-Forbearance is good, but we were paid to wave these flags.” Some commented, “So many Western people practice Falun Gong! Your procession is so long! Their drums are powerful!”

When a middle-aged woman stuck out her arms and shouted while the practitioners' waist drum team passed, spectators stopped her. One person asked her, “Why do you yell at the Falun Gong practitioners? They are so peaceful and compassionate! I can tell by the way you're behaving that you were educated by the Communist Party.” The woman stopped yelling.

Ms. Yi Rong said that she sincerely hopes people will realize that being patriotic about one's country isn't the same thing as loving the CCP, and that they will pay attention to what practitioners are trying to tell them. She pointed out that people asked for paper lotuses even though they were waving the Party's flags. She said, “We hope they take this opportunity to learn the truth. Since they've come to this land of freedom, we hope they will take advantage of this freedom and choose a bright future for themselves.”

The Global Tuidang Center was established in Flushing, NY, in early 2005. Falun Gong practitioner volunteers introduce Falun Gong, expose the CCP's lies, and help people quit the communist organizations at a booth in Flushing. Despite the Party's continued abuse and harassment, practitioners have remained firm in their efforts throughout the past 14 years and have helped hundreds of thousands of people withdraw from communist organizations.

“Podcast (Cultivation): “Because I Follow Dafa's Teachings My Business Has Blossomed””