This year's figure painting competition received more than 400 submissions from 258 artists in 46 countries. The judging panel then selected 103 of these works for exhibition at the Salmagundi Club in New York, and 63 of these works were honored at an awards ceremony held on Thursday, November 26, 2019.

An auction was also held for 48 of the award-winning pieces on Saturday, November 30, 2019. One piece received the highest bid of $2 million.

The painting competition aims to “revive the traditional art of realistic oil painting” and centers around the theme of “pure truth, pure kindness, and pure beauty” in the creation of human figure oil paintings using authentic academic realism painting techniques. 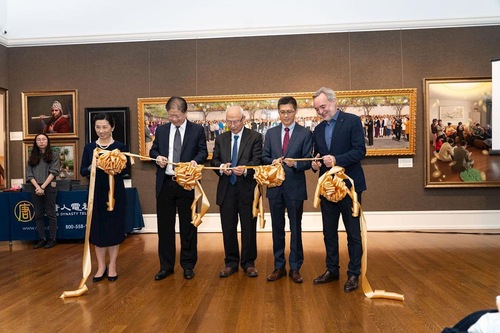 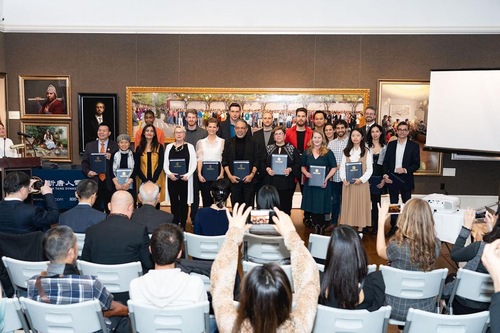 Winners of the 5th International Figure Painting Competition at the Salmagundi Club in New York on Thursday, November 26, 2019.


Visitors at the finalist exhibition in New York on November 26, 2019

Professor Zhang Kunlun: Human Culture Has to Be Restored 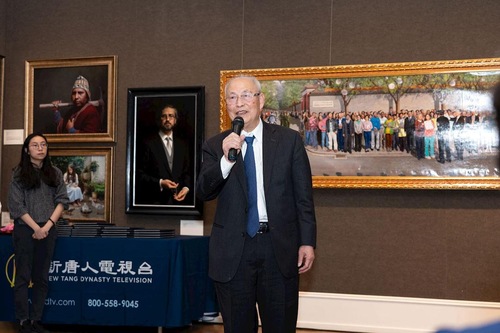 Professor Zhang Kunlun, the head judge of the competition, said he was very appreciative of the artists who participated in the competition, as they are helping preserve one of the best and most precious achievements of humanity.

“Nowadays art has degenerated to the extent to the point of no return, so to see that there are still so many artists walking the path of tradition... We must do so. Our arts must return to the path gifted to us by the divine. Human culture has to be restored–this is evident,” Mr. Zhang said. 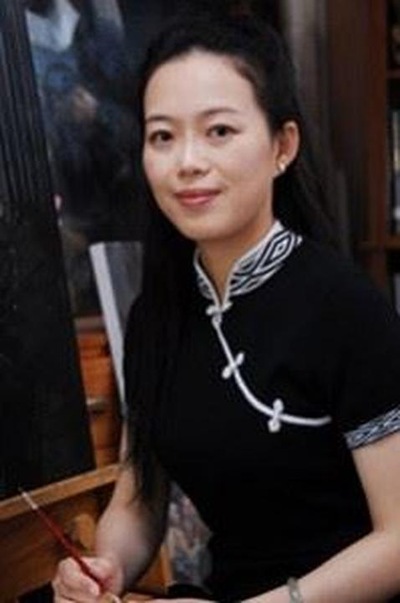 Xiaoping Chen, judge and two-time gold award winner of the competition. She is currently the chair of the Fine Arts Department at Northern Academy of the Arts in New York.

Xiaoping Chen, a judge and a two-time gold award winner of the competition, said the inspiration for creating works of fine art can be found in ancient wisdom and traditional masterpieces.

“Mankind is created by gods; therefore in depicting them, humans should strive for a truthful representation rather than distort or exaggerate... If [the artist] has a good grasp of accuracy in proportion, contours, contrast, and perspective, the figures depicted will naturally turn out beautiful,” she said.

Painters often struggle to create works of distinction. Yet, accurate and honest portrayals are often ignored by modern artists. Ms. Chen said delivering beauty, especially in figure painting, requires one to be faithful to the subject and adhere to classical realism styles.

In addition, a person’s inner spirit affects the caliber of their skills. “Good oil paintings, if we just look at the masterpieces in the museums such as those of Jean Auguste Dominique Ingres or William Adolphe Bouguereau, their strokes are so detailed that you can barely see them on the surface of the painting ... My understanding is that when the painter can take their own ego lightly and solely focus on showing the other, they can achieve almost flawless imitation.”

Ms. Chen said a painting can only be considered truly great when it resonates with people on a spiritual level, and this is only achievable through the artist’s internal, spiritual elevation.

“When your heart is filled with what’s noble and beautiful, it will show through your paintings,” she said. “You can only present beauty when there is beauty within you. Therefore you must elevate yourself.” 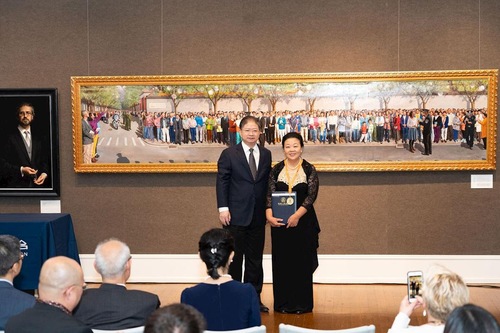 NTD Television CEO John Tang presents a medal and an award certificate to the gold award winner, Kong Haiyan, in front of her work “April 25, 1999.”

Kong Haiyan's gold award-winning piece, “April 25, 1999” portrays the historical moment when ten thousand Falun Gong practitioners, including herself, gathered outside the State Appeals Office in Beijing to peacefully appeal for justice after more than 40 practitioners were illegally arrested by authorities in Tianjin.

“As an artist, painting the truth is my mission. I want to show the world the truth about the persecution of Falun Gong practitioners. I hope that this persecution will end soon. That is my biggest wish,” Ms. Kong said.

“I want to convey compassion, and give people something bright and uplifting ... And I believe many artists in the world want to create traditional arts and present traditional values. That’s why a competition like this, that gives artists a chance to show these works to the world, is important,” she said. 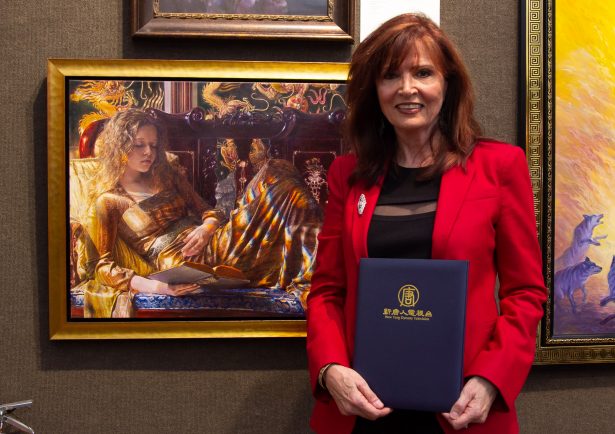 Sandra Kuck, winner of a Technique Award at the International Figure Painting Competition, with her work “Yin and Yang” on November 26, 2019.

“I’ve been to a lot of shows, and this is one of the best,” said Sandra Kuck, who received a Technique Award at the NTD competition.

Ms. Kuck has been a professional artist for 50 years. She has participated in many competitions and received many awards. To her, the finalists' paintings in this exhibition made it one of the best shows she has seen.

She was especially inspired by the silver award-winning piece, “Unmoved Under Immense Pressure” by Chin-Chun Liu. “It’s very classical,” she said of the composition and style. “I think I’m going to start going more this way.”

Bronze Awards: “Birds of the Air, Grass of the Field” by Lauren Tilden “Plum in the Snow” by Shi-ju Chiang“Self Portrait Preparing for Worship” by Joseph Daily

Technique Awards: “Child Fighter” by Philippe Lhuillier“Eat and Not Be Eaten” by Jesús Inglés Canalejo “Yin and Yang” by Sandra Kuck

“Woman, 65, Still Being Held in Brainwashing Center for Her Faith”