(Minghui.org) Today's news from China includes incidents of persecution that took place in 10 cities or counties in 7 provinces, where at least 19 practitioners were recently persecuted for their belief. 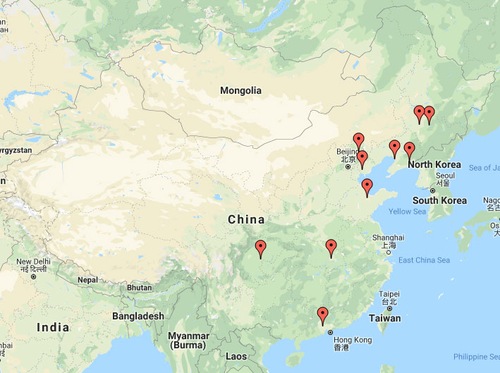 Ms. Liu Bing, Ms. Su Mingying, and Ms. Ni Yuxian were tried in Chuanying District Court on the morning of December 10, 2019. Ms. Liu was sentenced to four to five years in prison. The other two practitioners verdicts are not known.

Mr. Ju Shimiao, Ms. Sun Zhongqin, and Ms. Tong Xiuhong were arrested on December 8, 2019, for talking to people about Falun Gong. Their homes were ransacked, and a car, printers, photos of Master Li (the founder), and Dafa informational materials were confiscated. Ms. Zhou Chunling, who was in Mr. Ju’s home at that time, was also arrested.

They were all taken to the Fengcheng City Domestic Security Division.

Ms. Li Yueying was taken to Changchun No. 4 Detention Center.

Ms. Liu Mulan and her daughter Ms. Liu Jing from the Xinzhou District were arrested by officers from Shuita Police Station on October 16, 2019. They were taken to Wuhan City No. 1 Detention Center the following day.

Ms. Liu Jing was released on bail on November 22. Her mother was officially placed under arrest on the same day.

Ms. Mou Yanping from the Bayuquan District was told to go to the Bayuquan Domestic Security Division to answer some questions on December 10, 2019. When she arrived there, she was arrested and taken to Yingkou City Detention Center.

Mr. Fang Weixiong, 54, from Huilai County, was arrested by officers from Liede Police Station, Tianhe District on the evening of September 11, 2019. He is being held in Tianhe Detention Center.

Ms. Li Xiuhua and Ms. Deng Dehua were tried by the Lubei District Court on November 8, 2019. Both practitioners were sentenced to one-year prison terms.

Ms. Wang Derong from Lubei District was arrested by officers from the Tangshan City Domestic Security Division on the morning of December 7. She was taken to Guoyuan Police Station, where she was photographed, interrogated, and had her fingerprints taken. The officers ransacked her home, and confiscated Falun Gong books, informational materials, and other personal belongings. Ms. Wang was released later that evening because she had high blood pressure. The police extorted 800 yuan from her family.

Ms. Tan Qingxiu and another practitioner with the surname Xiang were arrested at Chuanzhong Market on the morning of December 11, 2019. Their homes were ransacked, and over 1,000 yuan in paper currency bills with Falun Gong information printed on them, along with informational materials, were confiscated.

Both practitioners are being held in Yongxing Detention Center.

Ms. Zhang Shulian was arrested by plainclothes officers on November 16, 2019, for giving out Falun Gong calendars. She was taken to Jiaoqu Police Station, and later transferred to Longhua County Domestic Security Division, where she was locked in an iron chair.

Ms. Zhang was given a physical exam in the City Hospital of Traditional Chinese Medicine, before being transferred to Chengde City Detention Center.