(Minghui.org) It's quite possible that Chen Yiqing owns the largest collection of music boxes in Taiwan. Starting out as a street vendor selling clothes to later working at a freight company, Ms. Chen always dreamed of owning her own store. After years of planning and preparation, she opened Merry Melody, her music box store in Taipei in November 2003.

“When I began preparing to open my store, the designer I worked with gave me some advice. He said as a business owner, it's important to ‘give’ to the community. I learned that when a person is truly considerate of others and wants to provide help, people see it and appreciate it,” said Ms. Chen.

In order to convey her message of warmth and hope, Ms. Chen installed a beautifully designed garden and large glass windows. She works with customers to incorporate their happy or special moments into the music boxes. Her customers appreciate her sincerity and kindness, and she opened two additional locations to meet the increasing demand.

Ms. Chen had known the store designer for many years. “He was always so kind and calm. No matter how complicated the situation became or how worried I was, he was always very calm. When I'd frantically phone him, he'd say, ‘No problem, I'll be there soon.’ He was the only person I knew who never got angry. I was curious to know his secret,” she recalled.

One evening in 2013, Chen asked him about it and learned he had practiced Falun Dafa for many years. She was about to go to Germany on a business trip, so she purchased a copy of Zhuan Falun, the main book of Falun Dafa's teachings, and read it on her trip. She said she gained a brand new understanding of life. 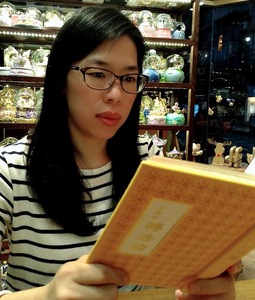 She remembered the designer always carried a book with a golden cover. “After we discussed work-related issues, it always seemed like he was about to tell me something. Now I know he was thinking about telling me about Falun Dafa, but he wasn't sure if I could accept it,” she said.

Ms. Chen said that she feels very fortunate. “If I hadn't come to Taipei to open this store, I probably wouldn't have met the designer or heard about Falun Dafa. I'd still be muddling along.” She says she's so happy that at age 39 she was able to find the true meaning of life and start her new journey of becoming a better person.

Becoming Considerate of Others

Instead of being judgmental of others or insisting on her opinion, she now evaluates things according to Truthfulness-Compassion-Forbearance, the core principles of Falun Dafa. When vendors ran promotional discounts one time, her employees suggested she contact them to receive these discounts. Ms. Chen told her employees, “If we're entitled to a discount, we'll get it. If it's not ours, we won't get it even if we fight for it.”

Ms. Chen applies Falun Dafa's core principles in her daily life and recommended the practice to her employees. “We often read Falun Dafa books or do the exercises together. They act according to these principles and sometimes point out where I can do better, such as letting go of the attachment of showing off,” she said.

Ms. Chen also looks within to improve herself. “I used to think I was nice to my employees. But now I realize that I was selfish—I treated them well hoping they would do perform better at work. I was kind to them in order to benefit myself,” she explained.

Earlier this year, two of her longtime employees planned to change jobs, and it was a big blow to her. “I felt bad. Then I realized my reaction was still about myself. I should think about things from their angle—what did they need, and was there anything I could do for them?” She added, “Cultivation is a process of letting go of selfishness. If I'm genuinely considerate of others and satisfy their needs, they won't be unhappy. Wow! It's so great to practice Falun Dafa.” 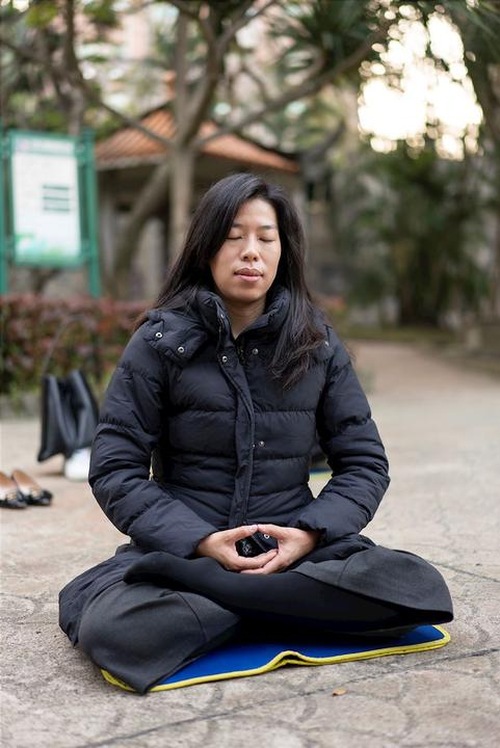 Ms. Chen does the fifth Falun Dafa exercise, sitting meditation, at a park.

Many people stop by the store, and each person has their own happy or sad story. Ms. Chen said that, in the past, her caring attitude towards her customers was superficial. In her mind, she still complained. For example, she became annoyed when someone handled the music boxes but did not buy anything. “After I began practicing Falun Dafa, I have a new perspective since I know that everything happens for a reason. We all have predestined relationships. No matter what happens, good or bad, they are all opportunities for me to cultivate my compassion. Whether people buy things or not, I truly care about them and try to help them,” she said.

For her, helping customers fulfill their dream is much more important than making money. For example, one customer wanted a model house on a cake with a picnic scene on the green lawn. “After thinking it over, I told her that it would be expensive if we made the lawn. If we instead used a paper lawn from an art gallery, the cost would be much lower,” she said.

“Several days ago, a business owner bought a music box for his grandson. As we talked, he complained about numerous issues with his employees. I shared my understanding that there are all kinds of predestined relationships and it may not be accidental that a particular person was his employee. We should try our best to guide and help them. The man was very touched and said that very few people think this way nowadays. Before he left, he bought another expensive music box,” Ms. Chen said.

Instead of focusing on selling products and making money, Ms. Chen always does her best to help her customers. She also finds a way to talk about Falun Dafa and explain that she uses the principles, Truthfulness-Compassion-Forbearance, as her guide.

She also introduces Shen Yun Performing Arts. Based on information from the Shen Yun website, she explains the relationship between the Five Elements, the Five Internal Organs, and the Five Music Notes. She also talks about how music can improve one's mind and body. Many customers have seen Shen Yun upon her recommendation, and afterwards they thanked her.

What is True Happiness?

Earlier this year, Ms. Chen's father was diagnosed with lung failure. She was shocked and saddened.

Based on her understandings from Falun Dafa, Ms. Chen told her father that the lung problem might not have been caused just by smoking and that it could be related to deeper, underlying factors. If he really wanted to become a better person, he needed to look inward. “Father told me he'd always been a nice person. I reminded him of the feud between him and a family member. To help him understand, I gave him an example: ‘Suppose a Buddha came and you kept telling him that you're so kind. Then, how can you explain this argument that you can't set aside?’” she asked.

She suggested her father let go of hatred and resentment, and genuinely treat others well. She asked that he repeat, “Falun Dafa is good” and “Truthfulness-Compassion-Forbearance is good.” During the next checkup, the doctor was very surprised and said, “Your father's lung has improved so much!”

Ms. Chen says she introduces people not only to music, but so much more. “I'm so grateful to Master and Falun Dafa! I've learned to be a better person. I now understand how to truly help people by introducing them to the best things in this world. I tell people about Dafa and how it will bring them true happiness and blessings. That is my sacred mission.”

“Learning to Consider Others: A Test of My Cultivation”