They called on the Australian Government to pass legislation similar to the Global Magnitsky Human Rights Accountability Act in the U.S. to sanction human rights perpetrators. Falun Gong practitioners demonstrated the five sets of exercises before the rally, and talked to passersby about the CCP’s persecution.

Many people were shocked to learn of the CCP’s state-sanctioned organ harvesting from living Falun Gong practitioners. Several people signed a petition urging the Australian Government to exert pressure on the Chinese regime to stop the persecution of Falun Gong. 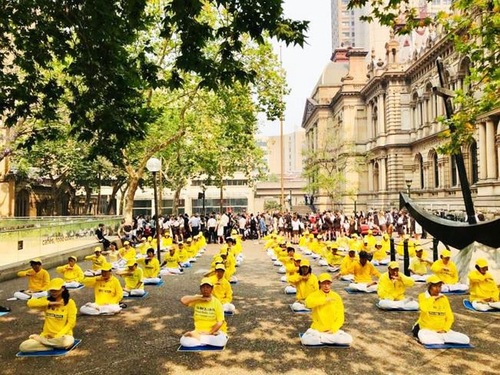 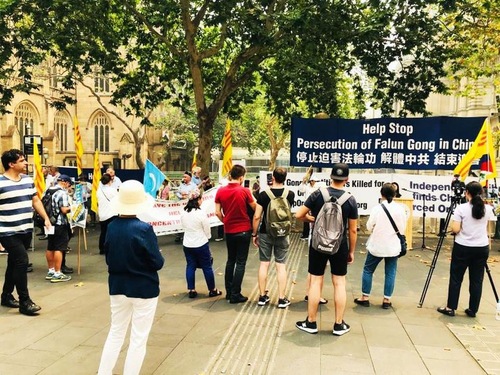 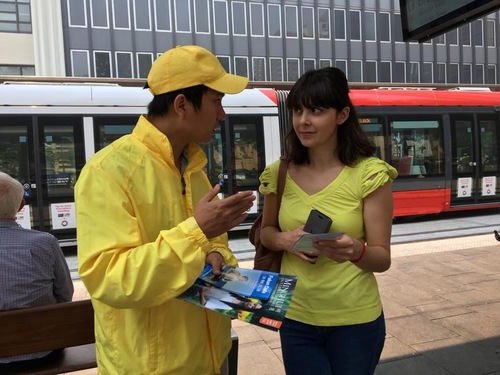 Passersby viewed posters and listened to practitioners explain the practice and the persecution. 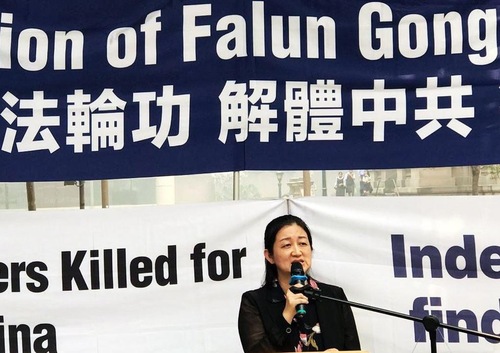 Dr. Lucy Zhao, director of the Australian Falun Dafa Association, talked about the CCP’s persecution. She said, “In the past 20 years, hundreds of thousands of Falun Gong practitioners were tortured in prisons, detention centers, forced labor camps, mental hospitals, and brainwashing centers.

“Many were killed while having their organs removed. This is even worse than the genocide of Jews during World War II. This human rights violation has been going on for 20 years non-stop. We call on each government, media outlet, and organization to pay attention to this persecution and offer support to the victims.”

“We heard that the Australian government is discussing passing a legislation of the Global Magnitsky Human Rights Accountability Act. This act will stop the human rights violators from coming to Australia. We support this legislation,” she added. 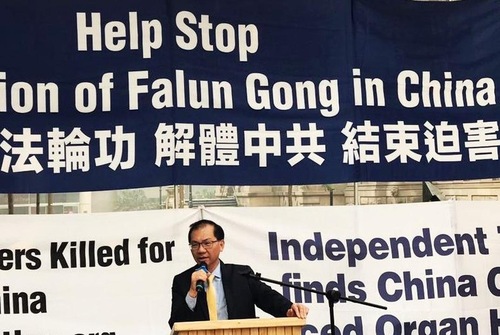 Paul Nguyen, president of the Vietnamese Community in Australia NSW Chapter, speaks during the rally.

Paul Nguyen, president of the Vietnamese Community in Australia NSW Chapter said, “In Vietnam and China, the human rights situation has deteriorated significantly. On this Human Rights Day, I hope that the Australian government will give top priority to human rights.

“We support the federal government in formulating the Global Magnitsky Human Rights Accountability Act like the U.S. government has, to prevent human rights violators and religious perpetrators from entering Australia.

“We hope to urge China, Vietnam, and other countries to stop violating human rights.

Christian Democratic Leader: Human Rights Are for Everyone 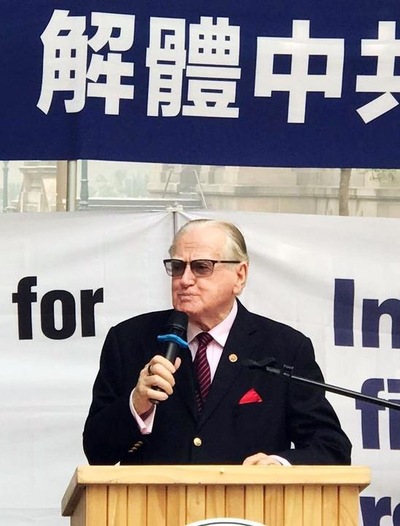 Rev. Fred Nile, a member of the New South Wales Legislative Council (MLC) and national president of the Christian Democratic Party, speaks during the rally.

MLC Rev. Fred Nile addressed the rally and said that human rights were for everyone. Everyone has human rights. He indicated that he was very concerned about religious rights. He pointed out that China’s human rights situation was poor and that Falun Gong practitioners were suffering the worst plight.

He mentioned that he watched the documentary film, Letter from Masanjia about the persecution of Falun Gong in China's forced labor camps. 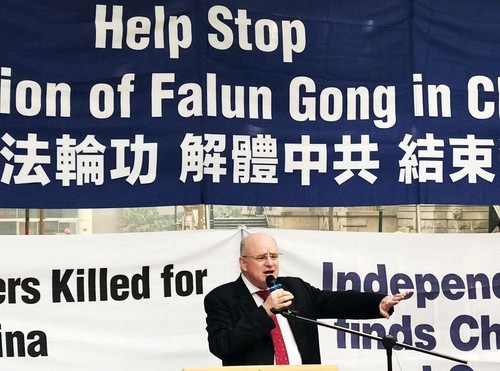 Former mayor Andrew Wilson of Parramatta speaks at the rally.

Former mayor Andrew Wilson of Parramatta told rally attendees that Falun Gong practitioners were people who love peace the most. But the CCP has continued the persecution for 20 years.

Australia is Being Invaded by Communism 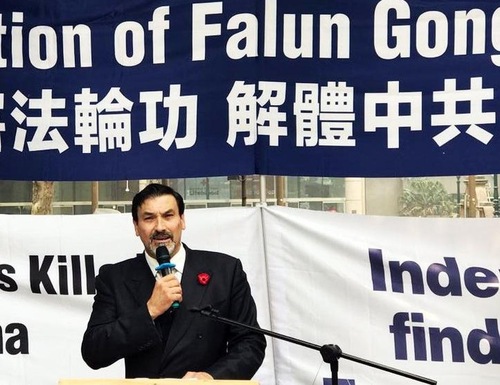 Riccardo Bosi said that Australia was being invaded by communism and it is an enemy we must face. He pointed out that the CCP’s live organ harvesting has killed many Falun Gong practitioners.

Sophie York, an Australian barrister, university lecturer, and writer, addressed the rally and said that the independent China Tribunal confirmed the occurrence of live organ harvesting in China.

She indicated that if such crimes were ignored, it would not only cause pain to individuals but also disrupt the peace and good order of mankind as a whole, leading to a cruel and barbaric world.

Ms. York stated that her heart is with all Chinese-Australians whose relatives are missing or suffering in any way, and none of us will rest until this terrifying act is over.

Michelle Nguyen from Ending the China Transplant Abuse (ETAC) spoke at the rally. She regrets that those professionals who were intimidated or bribed by the CCP chose to turn a blind eye or keep silent about the crime of live organ harvesting.

Facing this cruelty, she said, “We must openly condemn the CCP regime and call to stop the persecution of Falun Gong. We request that the Australian government stop all collaboration with any Chinese organizations on organ transplantation.”

She suggested that the Australian government pass legislation to block people from going to China for organ transplants and deny entry to human rights perpetrators. 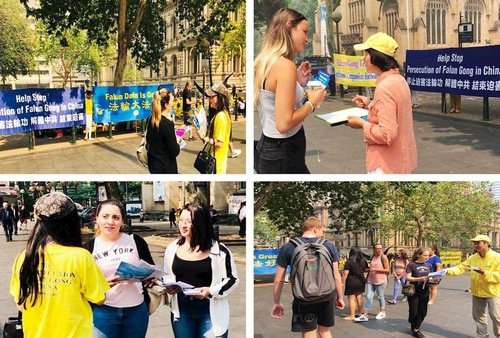 Falun Gong practitioners talk to passersby about the persecution. 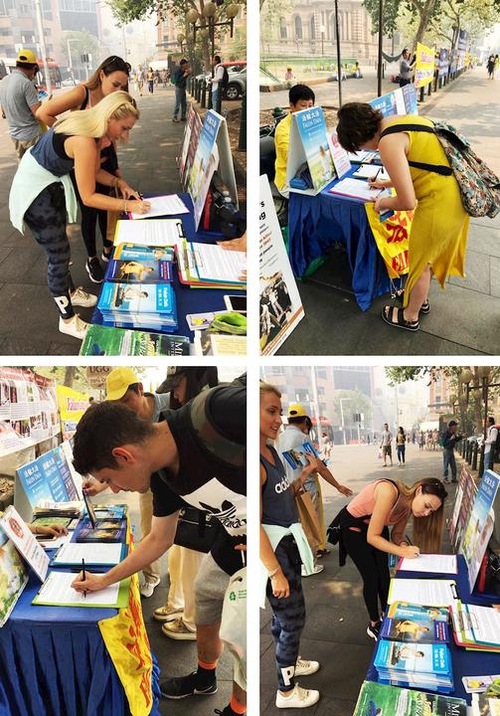 People sign the petition urging the Australian government to exert pressure on the CCP to stop the persecution. 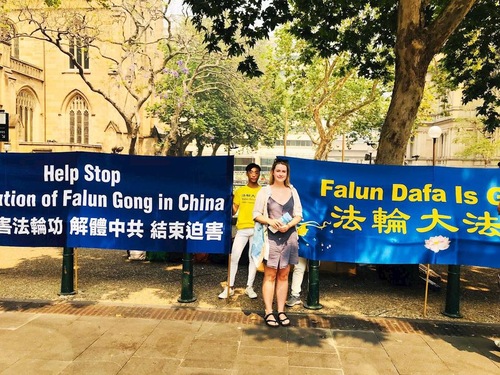 Grace from Ireland said that Truthfulness-Compassion-Forbearance is good for society.

Falun Gong practitioners talked to passersby about the persecution and collected signatures on a petition urging the Australian Government to exert pressure on the Chinese regime to stop the persecution.

Grace from Ireland was appalled at the persecution. She said, “Truthfulness-Compassion-Forbearance is good for society because it can help people to become good.” 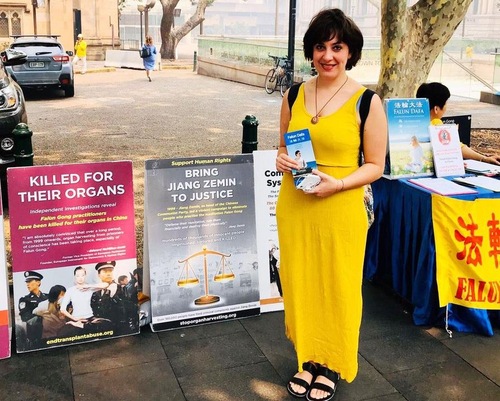 Manuela said, “This is the first time I've heard about the persecution. I wish to learn about Falun Gong. We need Truthfulness-Compassion-Forbearance, especially now.” She said she would introduce Falun Gong to her friends. 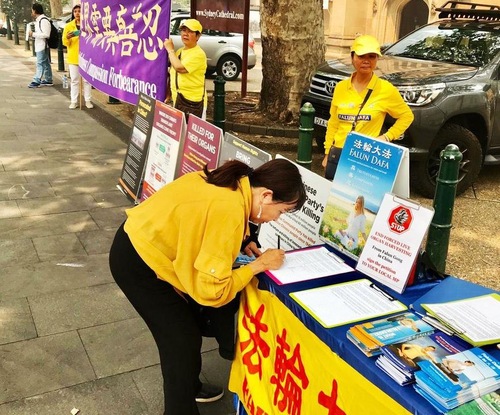 Mary from the South Coast of New South Wales said, “I learned from newspapers and radio that they (the CCP) test Falun Gong practitioners' blood for organ harvesting. I knew people were being killed. The government knows. But nothing has been done to stop it.”

She said that she was shocked and saddened when she first heard about the organ harvesting. She feels the crime is inhumane and terrible.

She said, “I support you. I have signed the petition. We will put pressure on the (Australian) government to urge the CCP to stop the persecution. I wish all Falun Gong practitioners will have freedom as soon as possible!”

“Arrested While Cooking Breakfast, Liaoning Woman Sentenced for Her Faith”

“From Doctor to Print Shop Coordinator to NTD, Saving People Wherever I'm Needed”