(Minghui.org) After the Chinese Communist Party started the persecution of Falun Gong, a spiritual discipline based on the principles of Truthfulness-Compassion-Forbearance, in July 1999, a large number of practitioners have been arrested and tortured for refusing to renounce their faith.

Falun Gong practitioners held at Xinsheng Prison in Gongzhuling City, Jilin Province have been subjected to two particular types of torture – being shocked with electric batons and tied up in excruciating positions – after the guards there noticed that the torture methods have achieved a higher rate of forcing the practitioners to give up their faith.

According to insiders, the guards usually use electric batons to shock newly admitted practitioners first. When that fails to shake the practitioners' faith, the guards tie them up in an excruciating position that often causes permanent damage. 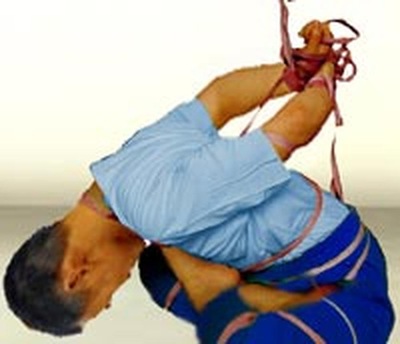 Torture re-enactment: Being tied up

This method causes breathing difficulties, and the guards untie the practitioners only during meal times or restroom breaks. Some practitioners were tied up like this for up to nine months.

Mr. Xu Hongyu of Shulan City, Jilin Province was one of the practitioners who was tortured by this method and eventually gave up his belief in Falun Gong against his will. He was arrested on July 18, 2018 and sentenced to two years and ten months in Xinsheng Prison on June 30, 2019.

The prison allows family visits only once a month, with the requirement that the family member who is visiting must produce certified documents to prove that he or she is not a Falun Gong practitioner.

When Mr. Xu's elder brother was finally allowed to visit him on November 27, 2019 after obtaining a certified document from the Political and Legal Affairs Committee, Mr. Xu, who looked emaciated with scars on his face, said that he was forced to write a statement to renounce Falun Gong against his will.

Witnesses later confirmed that Mr. Xu was shocked on his face and neck with electric batons to the point of being swollen. He was tied up for two nights on November 13 and 14.

According to reports compiled by Minghui.org, some practitioners were persecuted to death at the prison, such as Mr. Ma Zhanfeng, who was tortured to death a year after he was arrested in April 27, 2011 and sentenced to 6.5 years in prison.

Mr. Cai Fuchen was often locked in solitary confinement and shocked with electric batons on his head and sensitive body parts while detained at the prison. He was tortured to death on September 15, 2010.

Many others became disabled as a result of the torture.

Mr. Ma Zhanfang, a Falun Gong Practitioner in His 70s from Jilin Province, Dies Due to Persecution

Mr. Cai Fuchen Dies Under Suspicious Circumstances in a Jilin Province Prison on or about September 16, 2010