The Story of a Karaoke Bar Owner in Taiwan

(Minghui.org) Tzuyun has practiced Falun Gong for nearly 15 years. She follows the principles of Truthfulness-Compassion-Forbearance in daily life, and her world view has changed greatly. Her close friends and family were all amazed at how much she changed.

Tzuyun owns a karaoke bar, which opens in the evenings and closes in the early morning, at 3 a.m. or 4 a.m., each day. Her customers come from all walks of life. Many of them drink wine as they sing, and selling wine is a major source of income for the bar. As the bar owner, she greets customers, chats with them, and many years ago she used to drink with them. 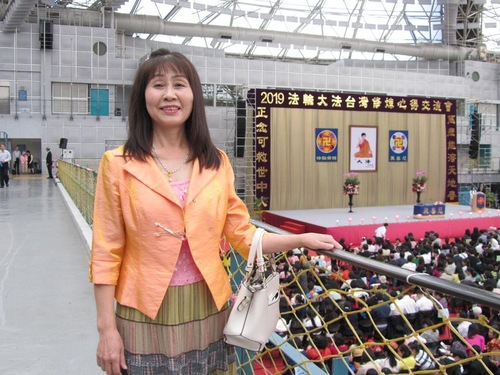 Tzuyun remembers being able to drink a lot of wine from a young age. But after drinking every day in her bar, she developed alcoholism. After her bar closed for the night, she would sit there and drink alone, regardless of the brand, as long as there was alcohol. Only drinking satisfied her alcohol addiction.

“I didn't have a normal life,” Tzuyun said. “I couldn't sleep without drinking. I once didn't sleep for a whole week.”

Then one day she felt her neck was very tight and her hands and feet were a little numb. She felt uncomfortable. She then woke up another morning and could not walk with her right foot at all. She managed to go downstairs, step by step, and told her father, “Dad, I can't move my foot.”

Her father saw her face was trembling, her right eye looked strange and the right side of her mouth was drooping. Water fell out of her mouth when she drank. He suspected that she might be having a stroke.

He rushed to the next alley to buy some herbal medicine and simmered it for her. After taking the medicine a few times, her symptoms eased. Her foot was still a little numb, but she could put on her shoes and drive to work.

“Excessive drinking is really poisonous,” Tzuyun said, “I had illnesses all over my body. I visited doctors 20-30 days a month. The staff and frequent customers in the bar knew that I always took medicine, both Chinese and Western medicine. But all of that was in vain.”

In addition to taking medicine, Tzuyun also struggled to find other ways to heal her illness.

“I was told that reading the Buddhist scriptures could make one healthy. My health did not get better even though I was a lay Buddhist for nearly 20 years. My health was terrible and my body was almost finished,” she said.

One early morning in fall 2005, Tzuyun was on her way home after work when she saw five large Chinese characters for “Falun Dafa is good” on the exterior of a bus. It piqued her curiosity. She mentioned the matter to her staff in the bar that evening. One of them said, “Oh, that's Falun Gong. Adong (a customer) has information about Falun Gong. Someone gave Adong a Falun Gong book some time ago.”

Tzuyun called Adong right away and asked him to bring the book to her and invited him to drink for free. Adong brought Zhuan Falun, the main book of Falun Gong to Tzuyun.

“I read the book very slowly. I did not finish reading it in one month,” Tzuyun said, though she eagerly wished to learn Falun Gong.

Tzuyun accompanied a relative in a taxi to the hospital one day. It happened that the driver, Ms. Chen, was a Falun Gong practitioner. Ms. Chen gave Tzuyun a flyer.

After going home, Tzuyun called the number on the flyer and asked what qualifications were required to learn Falun Gong and how much the tuition was. Falun Gong practitioner Ms. Huang replied, “It is free. There is no specific qualification. As long as you want to learn, we can teach you.”

Tzuyun was delighted and wondered how there could be such a good thing in the world. She enrolled to join a free nine-day Falun Gong class, which started on October 1, 2005.

On her way to the first day of the classes, she encountered interference. During her short five-minute journey, she walked back and forth a dozen times but failed to find the class location. She thought, “Never give up, I can't stop until I find the location.”

“I was a lay Buddhist and knew that this was due to karma,” Tzuyun said. “It did not allow me to learn Falun Gong, and created a blindfold to block my view of the location.”

After a while, Ms. Huang called Tzuyun and asked where she was. Learning what had happened to Tzuyun, she said, “It's okay. I will come downstairs to find you.”

Tzuyun looked behind her and saw the location.“Master saw my firm will to learn Dafa, and removed the blindfold,” she said, gratefully.

Tzuyun said she did not understand one sentence when she listened to Master’s lectures during the nine-day session. “Although I kept trying to keep awake, I always wanted to sleep,” she recalled.

“I could sleep well less than a week after attending the nine-day session. My health was getting better. My alcoholism faded, but I didn't think about quitting.”

About three months after taking up Falun Gong, a physical education teacher came to visit the bar. Tzuyun joined him to have a few drinks. As soon as her guest left the bar Tzuyun vomited and had bouts of diarrhea.

She had to be taken to the emergency room. She was released after taking a pack of medicine and having a whole bag of saline solution through intravenous drip.

“My heart was pained as I took the medicine. I did not want medicine anymore. After that I discarded all my traditional Chinese and western medicines.

“As long as I do the exercises, my body feels very relaxed and comfortable. I can't drink alcohol no matter how low the concentration because I will get a bad headache. I am scared as soon as I see wine. My addiction to alcohol is completely gone.”

One day, after over two months of practicing Falun Gong, Tzuyun had severe flu symptoms with a high fever and coughing. She felt miserable and called a veteran practitioner named Ms. Guo. Ms. Guo shared her own understandings from the Fa about illness karma manifestations and then said, “Tzuyun, if you cannot endure it, go see a doctor.”

“I felt at that time like I was almost dying. I didn't want to go to hospital, or take medicine. I lay beside the counter to rest and asked Master for help in my mind. I fell asleep,” Tzuyun said.

“I woke up about two hours later and my fever was gone and I felt comfortable. Master helped me pass the illness karma tribulation.”

“I feel great doing the group exercises. All my notions are gone. My mind and body are very relaxed. My whole body feels light and refreshed,” she said.

Tzuyun now occasionally accompanies her husband to hike in the mountains and participate in social events. She carries Falun Gong fliers or paper-folded lotus flowers in her handbag and distributes them to the people she meets.

Tzuyun said, “I have gone to a scenic site to clarify the truth and advise Chinese people to quit their memberships in the Chinese Communist Party and its affiliated organizations for almost ten years. I sincerely hope that people will not miss the opportunity to learn about Falun Gong and make the right choice for a safe future.”

“My Life Turned Around after Cultivating in Falun Dafa”