(Minghui.org) Over 1,800 Falun Dafa practitioners worldwide attended The Epoch Times and NTD Experience Sharing Conference online or in person.  At the conference in New York on November 23, 2019, 21 practitioners told their stories of how they improved their character. Master sent A Congratulatory Message to encourage all practitioners to do better in their practice and to improve the quality of the media. 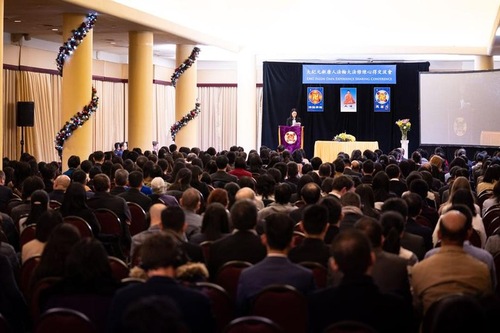 The Epoch Times and NTD Experience Sharing Conference in New York on November 23, 2019.

The practitioners participated in the annual sharing event from over 50 cities in about 30 countries. The speakers expressed their gratitude for Master’s compassionate salvation, and shared how they have progressed in the Fa rectification period.

Many of the practitioners risked their lives to report on the Anti-Extradition protest in Hong Kong. In the process they let go of their attachments to self, status, and monetary gain and strengthened their belief in Master and the Fa. Some witnessed the power of Dafa as they passed tests.

Speaking up for Hong Kong and Not Being Afraid

Since the protest broke out in Hong Kong last June, the world’s attention turned to the fight against the Chinese Communist Party (CCP). Practitioners realized that reporting the incident truthfully was a great opportunity to save people. Sarah, an NTD Television senior reporter, said that each day she and her teammates were able to upload dozens of short videos online on what happened to the protesters. In just a few months the subscriptions to their social media channels went up to 180,000 and they had over 4 million views every day.

The Epoch Times and NTDTV became a reliable media for people to learn the truth of what has been happening in Hong Kong. Sarah said that at various protests, “Many people held my hand and thanked me in tears, The Epoch Times, and Falun Gong, for walking with them in times of danger.”

Sarah is also a live reporter. “I couldn’t stand the clash at first and was afraid of getting shot,” she said. As the situation escalated, the police shot a tear gas canister every 5 seconds, and thousands each day. “I couldn’t avoid them anymore,” she said. She remembered Master’s teachings and focused on live reporting and interviews. Quickly her fear dissipated.

“The more dangerous it was, the more effectively we could save people,” Sarah said. When the law banning masks took effect, she did a live report on her own. As she saw people in Hong Kong still wore masks that day and protested fearlessly, she was able to get many touching interviews. She believed that practitioners’ reports bring positive energy to society and “more people were able to stand up and fight the brutality by the CCP.”

Tingting from Hong Kong worked as a reporter in New York. She went back home for three months to report on the event. She didn’t think that she was scared at first, until she experienced the police brutality and tear gas. “I dared not go home by myself and do a live report on my own,” she said. When she was splashed with an unknown liquid and physically attacked, her fear became uncontrollable.

Digging deeper for the root of her fear, she realized that she forgot to think like a practitioner, and failed to truly believe in Master and the Fa. She sent righteous thoughts every hour, studied the Fa at home, and recited it when she worked outside. She realized that Master was constantly watching over her and, “as long as my righteous thoughts were strong, there wasn’t any reason to be afraid.”

Tingting often worked until midnight and had to do triple the work compared to reporters from other news outlets. The experience in Hong Kong helped her eliminate the attachment to comfort. “It was a great opportunity to expand my capacity,” she thought. With Master’s help, her human desires gradually weakened. She wasn’t tired at all running around all day reporting. She wasn’t hungry, ate only once a day, and had abundant energy.

One Miracle after Another

Lili from Malaysia became a practitioner eight years ago and quickly started working for NTDTV. Lili graduated from middle school and never watched news before she picked up the practice. “It was a miracle that I could write news on China,” she said.

Soon after she joined NTDTV, she saw a giant golden pen in her dream. “It was a Fa weapon Master gave me to validate the Fa,” she said. A month later she felt a brain-shaped object fly out of her head screaming when she sent righteous thoughts. “From then on my thoughts were crystal clear,” as she was able to write news articles without any difficulty. Each time before she wrote, the structure of the article would emerge in her head, and she was able to quickly finish the article following the structure. During her busiest times, she could write a special report on China in the morning, and several news articles for the website in the afternoon. “I didn’t feel tired writing all day,” she said.

Last November she saw 12 Udumbara flowers on her bookshelf. It made her more diligent in her practice. “I study more than four hours and do the exercises two-and-a-half hours each day.”

When Lili started the practice, she was able to see golden Faluns and celestial maidens throwing flowers. Her stomach pain disappeared after she read a few pages of Zhuan Falun. “I am the luckiest being in the universe,” she said. 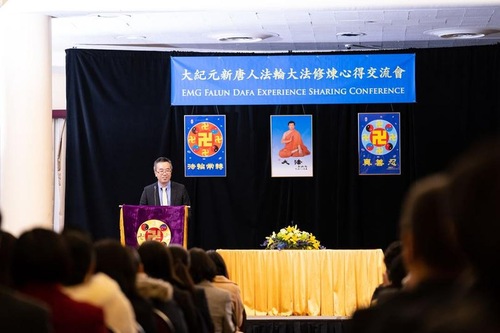 Li Xusheng from the Dajiyuan headquarters

Mr. Li Xusheng was a student in the U.S. when he picked up Falun Dafa. It was also the time The Epoch Times was set up. “It seemed that Master had arranged for me to work in the media on my cultivation path.” At first Li was the only full-time staff member and a reporter, editor, and salesman. He was very busy but totally enjoyed it. He gradually slacked off in studying the Fa and doing the exercises.

“I thought that I was young and capable,” he said, “and the old forces exploited that strong attachment.” He was involved in a bad car crash in 2005, which damaged his internal organs and broke his rib cage and pelvis. It was so bad that the doctors in the hospital gave up on the rescue effort.

With help from Master, other practitioners, and his family, Li recovered quickly without undergoing surgery. The hospital staff were in disbelief. Within six months he was back at work.

After that enormous tribulation, it got Li to thinking. He realized that he treated his work as cultivation. He was getting work done instead of acting like a true practitioner. He started to study and do the exercises frequently. As a result, “Nothing was delayed. In fact, I became more efficient. No matter how busy we are with Dafa work, we can’t ignore cultivation.”

Guan Zhong was a medical doctor who got his PhD in Hong Kong. He took an unexpected path. Initially he helped deliver the newspapers. One day a practitioner asked him to help in the printing facility. Though he didn’t think he’d have time between school and cultivation, he agreed to take on the job, knowing that he practiced Truthfulness, Compassion, Forbearance.

The work at the printing facility required him to work through the night daily. He had to deal with the machines and messy ink, a big contrast to a clean hospital facility. It was the kind of work no one wanted to take on. Guan remembered what Master said about the rock on the ground being kicked around, for no one wanted to pick it up. “Then I will pick it up,” he knew that it was a key part of the work to save people.

Sometimes Guan didn’t like the noisy and dirty environment, and felt that he shouldn’t be working there, as he is a doctor. Quickly he realized that it was his attachment to status and money. “The status and job were just trivial things that belong to the secular world,” he said.

Stop Being Attached to Right and Wrong

Yi works with the English Epoch Times in New York. She once had conflicts with a coworker for a year. Every time she had to deal with the coworker, she felt angry and wronged. “At the time I did realize that it was a test for me to let go of myself and the emotions,” she said, “but soon something else would come up and the same feelings came back all over again.” To avoid conflict, she steered clear of the coworker, and hence delayed much work.

One day when she studied the Fa, she read about Han Xin. She began to imagine herself as Han, and crawl between the coworker’s legs. She couldn’t stop crying and thought, “How did Han do it? How could he belittle himself like that?”

Yi understood that being tolerant required a strong will. “The true power comes from the firm belief in the Fa. The manifestation of Forbearance is to be considerate of others first in everything I do.” She repeatedly told herself that her coworker was on the right side, and slowly was able to calm down. From then on, when she didn’t agree with the coworker, she could stay calm.

Yi also came to notice that she often forced her own standards on others. “The only standard is Dafa. I was shocked and speechless upon realizing that ‘Yi’s standards’ were merely illusions.” To improve her xinxing she recited the Fa when she found someone not conforming to her standards.

Coming Back Twice to Media to Save People 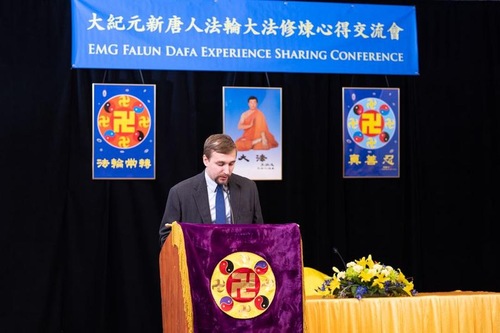 Mr. Ivan Pentchoukov has worked with The English Epoch Times (EET) for eight years and left twice in between. With Master’s hints and arrangements, he twice came back with stronger righteous thoughts each time.

The first time Ivan left because EET continued to suffer financial losses. He was sure that it would go out of business and hence left. “It made me feel frustrated not being able to save people full time,” he said.

One time he successfully sold many Shen Yun tickets. “When I saw the impact of righteous thoughts, I realized how powerful they were.” He wanted to apply them to the work he once did with EET. He decided to give up working on his PhD degree and, despite his parents’ strong opposition, went back to work for EET.

The second time he left was also for economic reasons. He became a taxi driver and planned to start a company. Again he realized he couldn’t save people effectively that way. “Many times I couldn’t lift my hand and give the passenger a flier.” He wanted to go back to EET again, only this time the resistance was even stronger. He would have to give up the investments he put in for the car and other equipment and his small business plan. He was determined to give it all up and told Master, “I absolutely believe that everything will be fine.” Miraculously, all his troubles were resolved. “I am so grateful that Master didn’t give up on me at that time.”

“Experiencing the Power of Falun Dafa”