(Minghui.org) A former senior police officer of Shijiazhuang City, Hebei Province, was once again arrested while reading Falun Gong books in a private home on August 15, 2019. She is now detained at Shijiazhuang No. 2 Detention Center.

Prior to her latest arrest, Ms. Zhang Yun, 64, had been detained and imprisoned for a total of nine years and three months for upholding her faith after the Chinese communist regime began a nationwide persecution in July 1999.

Ms. Zhang was subjected to horrific torture and intensive brainwashing, which left her on the verge of death several times.

The following is a summary of what she has been through.

Ms. Zhang was arrested on April 20, 2001, from her workplace and taken directly to the 4th Division of Shijiazhuang Labor Camp to serve a one-year term. The guards tortured her in order to force her to give up her faith.

1. Tied up in excruciating positions

On the day of her arrival at the labor camp, camp guards forced her to write a “guarantee statement” renouncing Falun Gong. When she refused to do so, she was tortured by three guards. 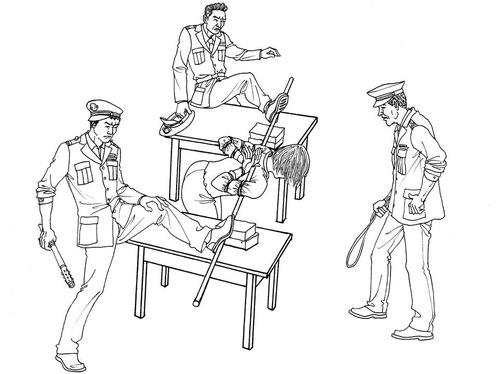 Torture illustration: Tied up in an excruciating position

The guards forced Ms. Zhang to take off her jacket, tied her up and forced her to kneel on the floor. They then twisted her arms and pulled them behind her, forcing them up towards her head. The pain almost caused her to pass out. The guards continued to wrap the rope around her from her shoulders down. While tightening the rope, they asked her if she would sign the guarantee statement. Ms. Zhang refused to comply.

The guards next inserted an electric baton into the rope on her back. The rope became so tight that Ms. Zhang almost suffocated; her shirt was completely soaked by her sweat.

“Aren’t you tough? You're like this in only four minutes and twenty seconds? It’s a much shorter time than the others,” said one of the guards.

As he was talking, he loosened the rope. At this point Ms. Zhang was coughing and retching.

“Do you know why we didn’t let you have lunch? You'll throw up everything even if you eat it. We don’t want you to make a mess here.”

After giving her a short break, the three guards pushed her face to the floor and began to hit her violently with rubber-wrapped bats (which contain iron wires inside the rubber that can cause internal injury). They kept asking if she would write the guarantee statement. Ms. Zhang bit the back of her hand to keep herself from speaking.

Ms. Zhang was unable to stand up by then. The three guards pulled her up and shocked her neck, hands, arms and legs with electric batons before they went out for a rest.

About half an hour later, the guards came back and started another round of torture. Two guards held her down on a table, while the third one hit her injured hip. She could not help but scream in pain. Her whole body was shaking.

The torture went on for the whole afternoon. The guards smashed her hip and both of her legs turned black and blue, leaving her crippled for two months. It took over two years for her hip to fully heal.

The labor camp locked up Falun Gong practitioners who refused to renounce their faith to prevent them from seeing each other. Each person was assigned to their own cell, which was much smaller than standard cells.

The guards deprived the practitioners of sleep for days and nights on end, while forcing them to stand still for long periods of time.

During the hot summer, mosquitoes and the noise from the beatings of other practitioners made sleep almost impossible.

One day at dawn, Ms. Zhang was taken to a garage. She was handcuffed and hung up, with only her toes touching the ground. Meanwhile, one guard hit her buttocks with a rubber bat, while the other shocked her with an electric baton.

The labor camp was a frightening place for Ms. Zhang, with guards going in and out of the cells all the time, torture tools in hand, threatening people as they walked around.

On May 13, 2001, Ms. Zhang was taken to a room with rubber-wrapped bats, electric batons, ropes, handcuffs, and a sample statement renouncing Falun Gong being placed on the table.

Guard Geng Xingjun said, “If you do not want to write your own, you can copy someone else's.” When she refused, he started to slap her in the face and threatened to torture her. He then shocked her right hand with an electric baton.

When Ms. Zhang could no longer endure the pain, she wrote a statement against her will.

Being extremely grieved and tormented over the statement she copied against her own conscience, Ms. Zhang's hair turned gray within a few days.

On August 18, she wrote an announcement to retract her renouncing statement. The guards threatened to apply even more brutal torture methods against her, but she was unfazed.

On December 26, 2001, Ms. Zhang was transferred to Kaiping Labor Camp in Tangshan City, Hebei Province, where she endured even more inhumane persecution.

She was forced to stand still for 17 to 20 hours every day for four months. Her whole body swelled up. Her towels and toothbrush were taken away, and she was subjected to repeated beatings.

A guard once hit her temple and face until she passed out. On another occasion, another guard slapped her in the face. She felt very dizzy and couldn’t hear things clearly.

On February 12, 2002, a guard ordered Ms. Zhang to stand outside from 6:00 a.m.. until midnight, without wearing warm clothes or shoes. She developed severe frostbite in her toes, which remained numb for eight months.

5. Using Her Young Daughter to Force Ms. Zhang to Renounce Her Faith

On April 17, 2002, three days before the end of her term, Luquan City's 610 Office transferred Ms. Zhang to the brainwashing center and extended her term for four more months.

Ms. Zhang went on a hunger strike to protest the extended detention and was subjected to intense force-feeding, among other forms of torture.

The perpetrators also brought her 16-year-old daughter to try to urge her to give up her faith. Her daughter's heart-wrenching sobs also made Ms. Zhang burst into tears herself.

Her daughter, a high school student, had to do all her own cooking and laundry along with her school work. Her poor health was reflected in her swollen legs as well as her dropped grades. During the two-hour visit she said only one thing to her mother: “Come home Mom, I miss your delicious noodles.”

Ms. Zhang encouraged her daughter to be strong and told her that she had not done anything wrong by practicing Falun Gong. She told her daughter that justice would be upheld one day.

Ms. Zhang was transferred to the Hebei Provincial Brainwashing Center on August 9, 2002, for another eight months. The practitioners were forced to watch slanderous videos attacking Falun Gong. The perpetrators deprived practitioners of sleep, used former practitioners who had turned against the practice to engage in brainwashing day and night.

On September 3, 2002, Ms. Zhang, having been deprived of sleep for two weeks, was forced to walk around continuously without breaks. She passed out after midnight and fell to the ground. When she woke up, her mouth was full of blood. Her front teeth were loose and her gums were receding.

Ms. Zhang questioned the guard, “What would you tell my family if I died from your sleep deprivation?” One person responded, “That’s easy. We can just say that you died from a stroke.” Another guard said, “We can make a TV program about you and just say you committed suicide.”

In order to force Ms. Zhang to renounce Falun Gong, several guards forced her to step and sit on the picture of Falun Gong's founder. They also forced a pen into her hand to write words insulting the founder. She was unable to eat anything for three days.

Ms. Zhang was finally released on April 4, 2003, after suffering two years of torture.

Ms. Zhang was arrested again on August 10, 2006, while talking to people about Falun Gong on the street. This time, she was given two years of forced labor at Shijiazhuang Labor Camp.

Ms. Zhang went on a hunger strike beginning on May 1, 2007. Two weeks later, the police put her on an IV, saying it was “for nutrition.” However, her feet swelled up and she started vomiting the first day she had the IV in. It went on for five days and her health deteriorated by the day. She became dizzy and had trouble breathing. Both her legs and feet became so badly swollen that she could not wear shoes.

Later she learned that the drip was mixed with drugs for treating heart disease, but she had no heart problems. She then developed symptoms of dropsy edema, along with a rapid heartbeat and chest tightness. She had three checkups, but no heart problem was found. It was obvious that the IV she was given was to damage her health.

When her term ended on August 24, 2008, instead of releasing her, the labor camp authorities transferred Ms. Zhang, who was already extremely weak by then, to a brainwashing center in Shijiazhuang under the excuse that Beijing was about to host the 2008 Olympic Games. She was not released until September.

Ms. Zhang was arrested again at work in June 2009. She was later given one year and nine months of forced labor and taken to Hebei Women's Labor Camp.

As Ms. Zhang refused to renounce her faith, the police told inmates to monitor her 24 hours a day. The inmates sealed her mouth with tape and cut her hair into a mess. Due to this mistreatment, Ms. Zhang could not eat for a long time and threw up everything she ate. She was so weak that she could hardly walk.

Three and a Half Years of Prison

Ms. Zhang was arrested after being reported for distributing materials about Falun Gong on November 10, 2013. She was later sentenced to three and a half years and taken to Hebei Women's Prison on December 16, 2014.

Ms. Zhang was deprived of the shower for months in a row. Even though she was in poor health due to previous persecution, she was forced to attend brainwashing sessions for long hours.

In order to torture her mentally, the guards forced her to put her fingerprint on a piece of paper filled with slanderous words against Falun Gong's founder. Her health kept deteriorating as a result of the long hours of mental torment and hard labor.

(For more information please refer to the Chinese version.)