(Minghui.org) The Art of Zhen Shan Ren (Truthfulness-Compassion-Forbearance) International Exhibition was held for a month in Salvador, the capital of Bahia in Brazil recently. The exhibition's opening attracted local newspaper and TV station coverage, publicizing the event and helping more people to learn about Falun Dafa and the persecution in China. 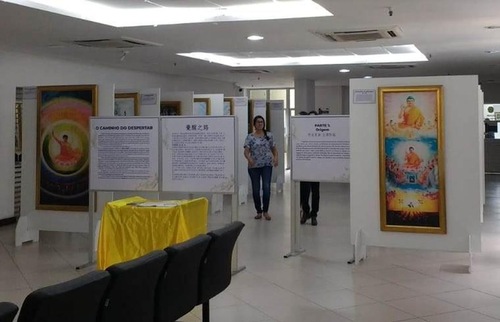 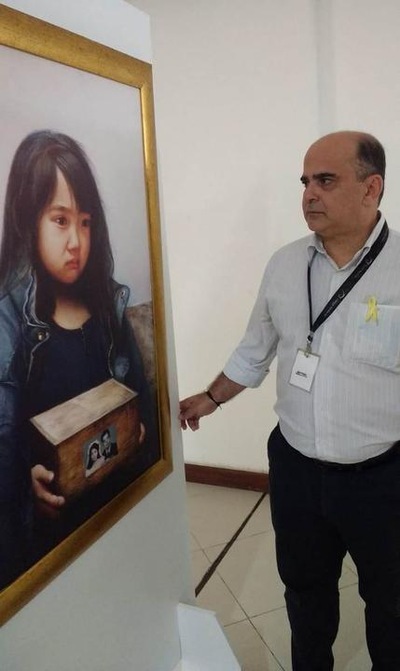 Alvaro Antonio attended the exhibition and said he was saddened by the cruel reality of the little girl in the painting “Tears of an Orphan.” “This small child has a heavy leaden look in her eyes as she weeps on the street holding the ashes of her parents. This really is very moving. Just because of their belief [they were persecuted], causing the family to lose all their joy. The current Chinese regime is extremely absurd.” 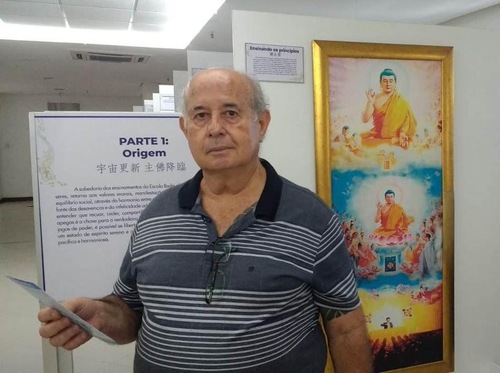 Jeova, 67, is a retiree. He took photos of all the paintings and captions and said he planned to review all of the photographs carefully. “For many years, I attempted to understand the many channels that could achieve justice in this world. I initially researched the law. Ultimately, I found that law is intertwined with money, so I gave it up.”

He said he had traveled to Japan and tried to find a spiritual path that accorded with him there, but little was gained. When he visited the exhibition, he was very interested in Falun Dafa, “From the paintings, I can feel the possibility of enlightenment through the meditation. I want to learn more about Falun Dafa,” he said.

A practitioner told him to read Zhuan Falun and to come to learn the exercises for free in the park every Sunday. The man was happy to come across Falun Dafa and practitioners. He found the Chinese Communist Party's (CCP's) persecution of Falun Dafa in China abhorrent. He said, “The persecution of people who promote morality cannot be tolerated. I deeply regret those who are indifferent to the CCP's cruelty.” 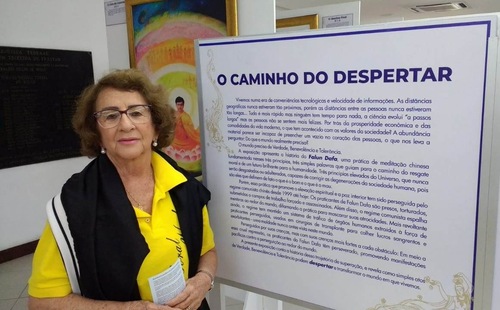 Retired professor Seleste Diniz attended the exhibition and was interested in how Falun Dafa's principles guide practitioners in improving their moral values in their daily lives. She thanked the founder of Falun Dafa, Master Li Hongzhi, for teaching the world such a good practice.

She used to worry that the young people didn't want to know about the sacredness of God. She said that she can rest assured knowing that human beings would be truly saved in the future. She wished to learn Falun Dafa and introduce it to people she knows. 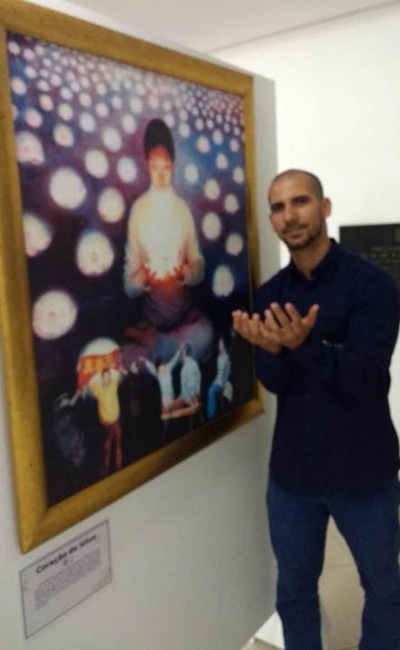 Thiago Izidio liked the exhibition very much. Standing before the painting “Lotus Heart,” he imitated the hand gestures of the practitioner in the painting. He said that he admired this sacredness displayed in the painting.

“The CCP’s persecution of faith is ridiculous'” he said. “Persecution is a war. The power of justice is defeating the evil.”

He said that he saw a news piece on a Brazilian television station the day before condemning the CCP’s persecution of human rights. He said he would go to the park with his wife and son to learn Falun Dafa the following Sunday. 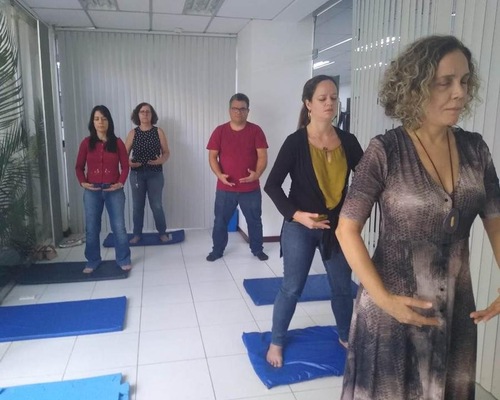 Learning Falun Dafa during the exhibition

Through the exhibition, she developed a great interest in Falun Dafa. She said she suffers from chronic pain and has tried many treatment methods. She felt that if she learned more about Falun Dafa her mind and body would change along with her understanding.

“An Award for a Dafa Tutor”