(Minghui.org) On September 24, 2019, Ms. Liao Qiulan, a Falun Dafa practitioner in Hong Kong, was repeatedly struck in the head by two masked assailants in broad daylight. Their weapons were batons similar to those used by police officers. 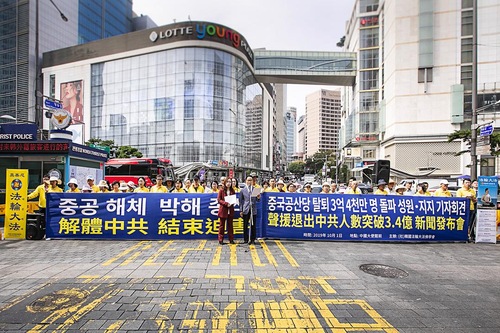 The Falun Dafa Association in Korea held a press conference in front of the Chinese Embassy in Seoul on October 1, 2019. They condemned the CCP's attack on Liao Qiulan, a practitioner in Hong Kong. 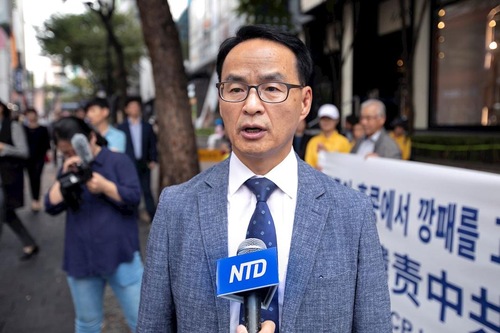 Professor Wu Shilie, secretary of the Falun Dafa Association in Korea, condemned the CCP's violent attack on Ms. Liao Qiulan during a press conference on October 1, 2019.

The Falun Dafa Association in Korea held a press conference on October 1 in front of the Chinese embassy in Myeong-dong, Seoul, condemning the Chinese regime for this shameless, brutal act. They also celebrated 340 million Chinese people withdrawing from the Chinese Communist Party and its affiliated youth organizations.

The CCP Uses Masked Thugs to Attack the Innocent

Professor Wu Shilie, secretary of the Falun Dafa association, criticized the Chinese regime for extending its persecution to Hong Kong.

Ms. Gao Chengnu, a Falun Gong practitioner from China, described the torture she went through in China because she refused to give up her belief. She hopes that the recent attack in Hong Kong will help people realize the CCP's evil nature.

Wu Shilie pointed out that an estimated 80 million Chinese people have died in the CCP's various political campaigns since the Party came to power. The Party continues to deny Chinese citizens their basic human rights such as freedom of thought, belief and speech. The regime is also systematically destroying Chinese traditional values. Mr. Wu said, “The CCP is destroying world peace, threatening its neighbors and it has never stopped its interference in Korea.”

Mr. Wu also called on those who haven't yet quit the CCP organizations to quit. He also warned people in Korea not to have dealings with the Communist regime due to its evil nature. 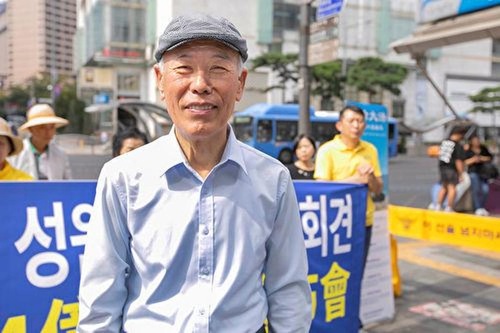 Mr. Zheng Taihuan, a former patent corporation officer, regularly goes to tourist attractions to talk to Chinese tourists about the persecution in China.

According to Mr. Zheng, at first the Chinese tourists refused to listen to him and some even tried to kick down his display board. He said that now things have changed. He noted that Chinese people, especially those age 25 to 35, dislike the Communist regime. Mr. Zheng said that these young people are a new generation with independent thinking.

“Introducing Falun Gong at Local Events Around the World”