(Minghui.org) Around a hundred members of the Tian Guo Marching Band from all over Europe held an experience-sharing conference in Athens, Greece on Sunday, October 13, 2019, following a successful parade in the city.

Ranging in age from 13 to 70 years old, the band members came from England, Germany, France, Belgium, Finland, the Netherlands, the Czech Republic, Switzerland, Croatia, Austria, Spain, and Ukraine. They are guided by Falun Dafa’s principles of Truthfulness-Compassion-Forbearance to grow spiritually and to improve their musical skills. The band’s performances display the beauty of Falun Dafa and help to raise awareness of its persecution in China.

Many members of the band started learning their instruments in their 50s alongside work, family, and other activities. Though they do not have musical backgrounds, they share a strong belief in Dafa and have been able to improve their skill by the day through practice and introspection based on Dafa’s principles. Each year, the band members have to take a test of their musical skills.

In addition to devoting time and money, the musicians have to overcome many physical challenges, such as performing in parades that last two hours or longer. Some drive for ten hours to play in these events. However, many said they could recover their energy by doing the Falun Dafa exercises.

Speakers at the conference shared that when they ran into difficulties in their spiritual practice and in musical performances, they put more effort into studying the Dafa teachings and try to improve their character, with the common goal of attaining a pure sound that can touch people’s hearts.

Trumpet player Petra Spulnik recalled that she wanted to quit at one point but realized that she had to eliminate attachments and negative thoughts by doing well with the basics of cultivation. So, she tried harder each day to improve on the basics. Petra eventually earned a diploma in playing the trumpet. She realized that everything was related to her cultivation state and that as long as she improved her cultivation by changing her thoughts and attitude, things would change for the better. 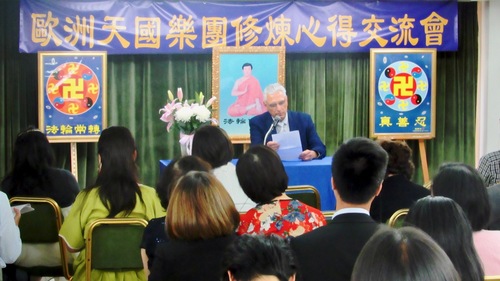 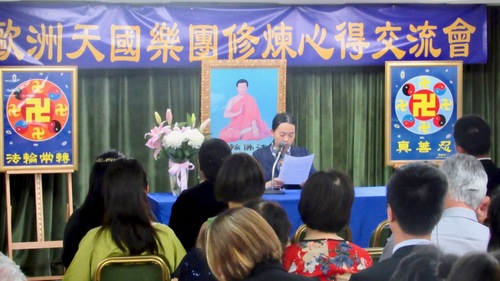 Some members of the band take on additional duties, such as planning for parades, coordinating the group across multiple countries, maintaining standards and quality, and handling the band’s finances and website. One of the coordinators shared that looking within to improve oneself was more important than the outcome of an event. By looking inward, he found fear, selfishness, impatience, and fear of criticism. He also learned to trust others and divide responsibilities, allowing him to spend more time teaching band members music theory at his house. In the process, he also learned to give feedback to others in more gentle ways.

Speakers also recalled how Dafa’s energy manifested through miraculous occurrences, such as dark clouds giving way to blue skies during the band’s performances, as well as being able to play Dafa music in strenuous settings without feeling tired.