The article reported that a human rights lawyer has accused the Chinese government of murdering members of the Uighur Muslim minority and the Falun Gong religious group to harvest their organs, and has urged the U.N. Human Rights Council to investigate the allegations. 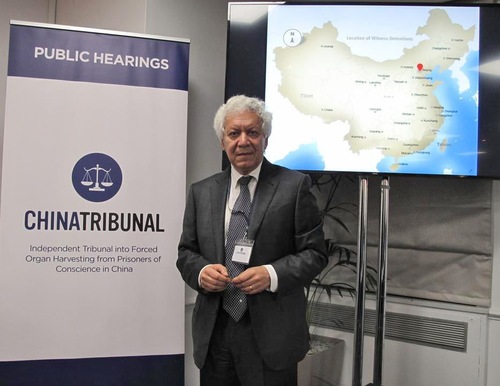 Hamid Sabi, Lawyer and Counsel to the China Tribunal

Hamid Sabi is a China Tribunal lawyer. The China Tribunal is an independent panel founded to examine the issue of Chinese organ harvesting, headed by British Lawyer Sir Geoffery Nice, who previously led the prosecution against Serbian president Slobodan Milošević.

“Forced organ harvesting from prisoners of conscience, including the religious minorities of Falun Gong and Uighurs, has been committed for years throughout China on a significant scale,” Sabi told the U.N.H.R.C. on Tuesday.

The tribunal’s final report on the matter details abuses committed by the Chinese government, and asserts that the government-sanctioned doctors to “cut open [victims’ bodies] while still alive for their kidneys, livers, hearts, lungs, cornea, and skin to be removed and turned into commodities for sale.”

Falun Gong, a religious practice based on meditation, has long been banned in China. Its practitioners are often imprisoned.

The article points out that organ transplant waiting times in China are extremely short. This prompts overseas patients to come to China for treatment. The tribunal concluded that based on Chinese organ donation laws, the organ supply should be much lower than it currently is, if the donations were truly voluntarily.

Reuters also reported on September 24 that Hamid Sabi, Counsel to the China Tribunal, told the United Nations Human Rights Council (UNHRC) that the harvesting has involved “hundreds of thousands of victims,” mainly practitioners of the banned Falun Gong spiritual movement. He added that detainees from China’s ethnic Uighur minority were also targeted.

Sabi said, “Victim for victim and death for death, cutting out the hearts and other organs from living, blameless, harmless, peaceable people constitutes one of the worst mass atrocities of this century.”

Geoffrey Nice, the tribunal’s chairman, told a separate U.N. event on the issue that governments, U.N. bodies, and those involved in transplant surgery, could no longer turn a blind eye to the “inconvenient” evidence.