Torture Used in Yunnan No. 2 Women's Prison—Sitting on a Small Stool

(Minghui.org) “Sitting on a small stool” is a form of torture widely used on Falun Gong practitioners in Chinese prisons.

The stools are around 20 cm (about 8 inches) high and 8 cm (about 3 inches) square. The person must sit with her legs pressed together, hands on her knees. She is not allowed to look around, move, or shift positions for a long time, usually from 7:00 a.m. to 11:00 p.m. Other than eating and going to the restroom, she spends the entire day sitting on the stool.

After sitting on the stool for just an hour, discomfort turns to pain. The pain becomes excruciating, like countless arrows piercing the lower body and worms gnawing on the bones. Most victims develop swelling in their limbs and high blood pressure from staying in one position for so long. Some have open, bleeding, festering wounds on their buttocks, some with their bones protruding or worse.

Practitioners who refuse to renounce their faith were often forced to sit still on such stools every day for months or even years. Sometimes, while the victims were forced to sit this way, the guards would turn up an audio player as loud as it would go and then leave. 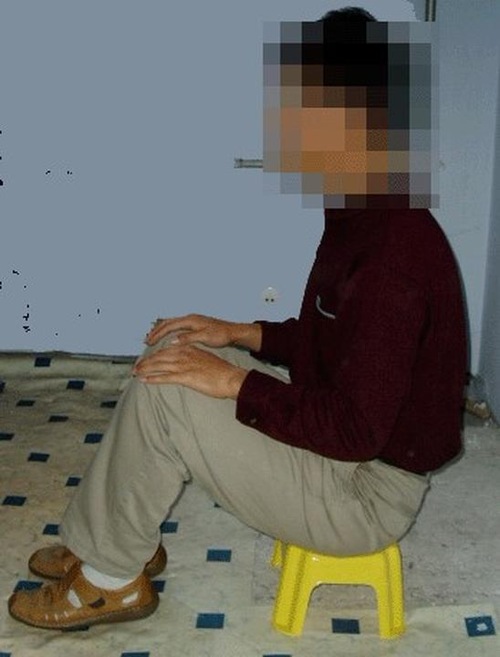 This method of torture was initially used on Falun Gong practitioners in the notorious Masanjia Forced Labor Camp. From there, it was spread to other prisons around the country. Yunnan No. 2 Women's Prison started using this tactic on imprisoned practitioners in 2005.

The director of the prison, Yang Mingshan, once told a family member of a detained practitioner, “...regarding your complaints about Falun Gong practitioners being forced to 'sit on small stools' as corporal punishment. How would you define this? It is only a form of study.”

However, this form of “study” amounts to severe physical abuse.

Ms. Guo Ling, a retiree from Supply and Marketing Store of Kunming, was sentenced to seven years to prison for practicing Falun Gong. She was sent to Yunnan No. 2 Women's Prison in September 2009 and made to sit on a small stool every day for almost two years.

In June 2011, the prison hospital confirmed that Ms. Guo had femoral head avascular necrosis resulting from the interruption of blood supply to her hip bone.

Two months later, Ms. Guo suffered an injury to her lower back. She was completely immobile before prison officials released her on medical parole.

Ms. Dai, who was retired from Kunming Thermal Power Company, was arrested in 2008 for handing out informational DVDs about Falun Gong. She was sent to Yunnan No. 2 Women's Prison in May 2009.

According to Ms. Dai, “I was forced to sit on a small, hard bench for 15 hours a day without moving. My buttocks blistered and it was very painful. Every day at 6:30 a.m., I was woken up and forced to read books that slandered Dafa. I had to get permission even to wash my dishes and go to the restroom. I was forced to sit on the small, hard bench until 10:30 p.m. before I was allowed to lie down and go to sleep.”

As a result, Ms. Dai experienced many physical problems. The flesh on her buttocks festered, her feet and legs swelled, and she lost feeling in two of her toes. Her vision deteriorated. She also experienced pain and numbness in her right arm and finger joints. By August 2009 when Ms. Dai's family was finally allowed to visit her in prison, she had almost lost her eyesight and was unable to see anything clearly.

Ms. Han Junyi was forced to sit a small stool for over three years. Pus formed on her buttocks and later became a thick layer of callus.

Ms. Wu Qihui sat on a small stool for almost four years. The flesh on her buttocks turned black.

Ms. Gao Cuifang experienced numbness in her body after sitting on a small stool for 5 months and became critically ill.

Sitting on a Small Stool: How the CCP Turns an Ordinary Piece of Furniture Into an Instrument of Torture

“Gong Sui: An Official Known for Loyalty, Generosity, and Wisdom”