(Minghui.org) Today's news from China includes incidents of persecution that took place in 17 cities or counties in 12 provinces, where at least 46 practitioners were recently persecuted for their belief. 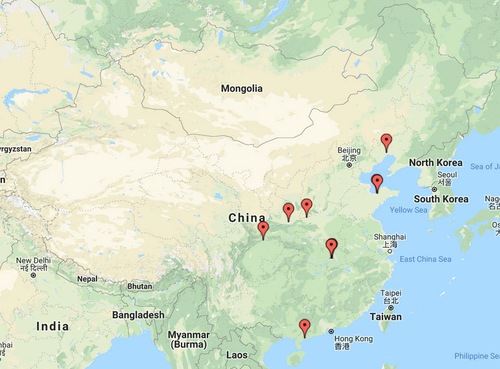 Ms. Tong Julan, near 80, and Ms. Liu Shuhua, near 70, both from Xinzhou District, were sentenced to seven years and two and a half years in prison, respectively, in late December 2018. They are not in good physical and mental health as a result of the abuse they have endured.

The home of Ms. He Xiufeng in Shucai Village, Jiachuan Town, Wangcang County was ransacked on the afternoon of December 20, 2018, by police officers and He Yingchun, director of the local police station. They confiscated personal belongings including Falun Gong books and over 200 yuan in paper currency with Falun Gong information printed on the bills.

Ms. Dong Liyuan, of Tushan Town, was arrested by officers from the Tushan Police Department on the afternoon of December 31, 2018, after someone reported that she was talking to people about the persecution of Falun Gong. She was taken to the Laizhou City Detention Center.

Mr. Zhu Shixiong and Mr. Liang Yuansheng were taken to the Sihui Prison on December 24, 2018.

Ms. Mei Jing, Mr. Zhang Bo, Mr. Xiong Youyi, and other practitioners who were arrested in Wuchang District were subjected to physical exams on December 25, 2018. The physicals included blood tests and examinations of the liver, kidneys, heart, lungs, and corneas. The police officers threatened to sentence the practitioners to seven or eight years in prison. The practitioners are being held at Qingling Detention Center.

On the same day the practitioners were arrested, police ransacked their homes and confiscated their computers, printer, cell phones, Falun Gong books and printed materials, and more than 80,000 yuan in cash.

According to verified news on December 31, 2018, Ms. Yang Chaoqin and Ms. Liu Xuecui, both from Songzi City, are being detained in the Gongan County Detention Center.

Practitioner Liu has been held in the Jinzhou Detention Center since being arrested by a plainclothes officer on the afternoon of December 30, 2018, for telling people about the persecution of Falun Gong.

Mr. Li Dang was arrested by officers from the Lianhu District Domestic Security Division on March 30, 2016, for suing former CCP leader Jiang Zemin in June 2015. He was detained for two years and two months at Lianhu District Detention Center before the Lianhu Court sentenced him to three years in prison and five years probation. He was released on May 23, 2018.

Ms. Liu Yuejing, in her eighties, from Jianghan District, has been missing since the morning of December 17, 2018, when she went to ask her community officer to remove the surveillance camera outside her home.

Ms. Wu Derong, 67, was sentenced to three years in prison on December 4, 2018, by the Naxi District Court in Luzhou City, Sichuan Province. It was reported that 610 Office agents accused her of posting Falun Gong informational posters around town because she went out early in the morning every day.

Xiaogan Intermediate Court upheld Mr. Xiong Jiwei's four and a half year prison sentence on December 5, 2018. He has been held in the Fanjiatai Prison since December 9. Before that, Mr. Xiong was detained for more than a year at Anlu Detention Center following his arrest, and was denied family visits.

Mr. Liao Songlin, 77, was taken to Wangling Prison on December 20, 2018, to serve a three-year term. He and his son, Mr. Liao Zhijun, are both serving time in the same prison for their faith in Falun Gong.

The elderly Mr. Liao received the prison sentence on October 22 from Beihu District Court. He filed an appeal to Chenzhou Intermediate Court shortly afterwards. The judge initially told him that he was planning to hold a “conference style” hearing for his case, rather than an open hearing. Just as Mr. Liao went back to prepare his defense argument, the judge informed him the next day that he had issued the verdict to uphold his sentence.

Mr. Liu Jiarong, 73, was sentenced to one year in prison in late December 2018 for talking to people about Falun Gong. He was first imprisoned and then transferred to the Hongze Laogai Farm, which belongs to the prison.

Prior to this sentencing, he had been repeatedly arrested, and detained several times at Huaiai Brainwashing Center and Fangqiang Forced Labor Camp because he raised awareness about the persecution of Falun Gong.

Mr. Sun Jianfeng was arrested on the evening of December 31, 2018. The police broke into his home and confiscated his Falun Gong books. When his family asked why they were arresting him, the police said that someone reported Mr. Sun for distributing Falun Gong materials.

This was the second time that Mr. Sun was arrested in 2018. He was arrested and detained for 13 days in late September 2018 for filing complaints against Yinchuan Prison for harm from torture he suffered while imprisoned there for his faith.

Mr. Zhang Shuyong was arrested by Huairen Domestic Security officers on the night of June 12, 2018, because he signed an appeal to request publicity of Chinese Central TV information. He was tortured for two weeks, until emaciated, and then released, but remains under surveillance.

The Huairen Court held a trial for Mr. Zhang on September 4, 2018, which forced him to leave home and become destitute in order to avoid being persecuted. His whereabouts are unknown. His family, especially his 80 year old mother, are very worried about his safety.

Ms. Lu Fenghua was arrested at home by officers from Jiaonan Police Station on June 4, 2018. Her arrest was approved by the Jiaonan Procuratorate on June 19. The Huangdao District Court then sentenced her to three and a half years in prison and fined her 10,000 yuan on November 26, 2018. Ms. Lu has filed an appeal.

Ms. Jin Liyan, 74, was sentenced to eight years in prison in May 2017. The sentence was respited because of her heart illness. After her release, Domestic Security officers from Jiaocheng District frequently required that Ms. Jin get a physical exam.

Mr. Xiong Youyi and five other practitioners were arrested by Wuchang police on the afternoon of December 25, 2018. They were forced to have a physical examinations, including having a few hundred milliliters of blood drawn and being checked for heart, liver, and kidney function. Their corneas were also examined.

The police threatened to have them sentenced to seven or eight years in prison. They are being held in Qingling Detention Center.

“My Husband and I Will Always Be Steadfast Practitioners”