(Minghui.org) On January 16, 2019, the Belgian weekly news magazine Knack published a report detailing the award-winning documentary Letter from Masanjia. The film is about Sun Yi, a Falun Gong practitioner who was persecuted by the Chinese Communist Party (CCP). 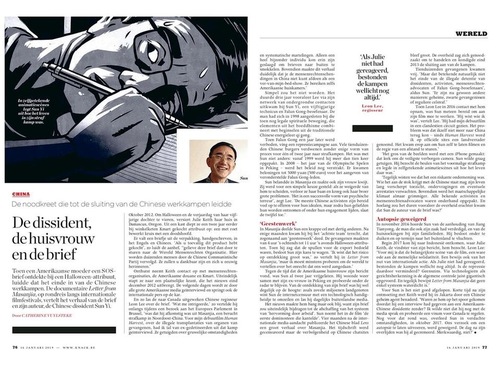 On January 16, 2019, the Belgian weekly news magazine Knack published an article on the CCP’s persecution of Falun Gong practitioners.

The article covers the beginning of the persecution of Falun Gong in 1999 and how the Chinese regime has arrested and detained thousands of practitioners without following any legal procedures. Practitioner Sun Yi was repeatedly arrested. His wife was forced to divorce him or she would be fired from her job and her brother's career would also be jeopardized.

The article also gives examples of how the CCP instigates the Chinese to participate in the persecution by rewarding them financially. During the 2008 Olympics in Beijing, the CCP tightened control and offered rewards as high as 5,000 yuan ($738) to those who reported suspected Falun Gong practitioners to the authorities.

The documentary depicts how Julie Keith, an American who lives in Oregon, found a letter inside a box of Halloween decorations she'd purchased at a local Kmart store. The letter was a plea for help from someone detained in the Masanjia Forced Labor Camp in Shenyang, Liaoning Province, China. The writer, Sun Yi, describes in great detail how he was illegally incarcerated in the labor camp, tortured, and forced to do slave labor making decorative products for export.