(Minghui.org) Today's news from China includes incidents of persecution that took place in 9 cities or counties in 6 provinces. According to this report, 15 Falun Gong practitioners were subjected to mistreatment during their detention, and at least 8 were illegally arrested. 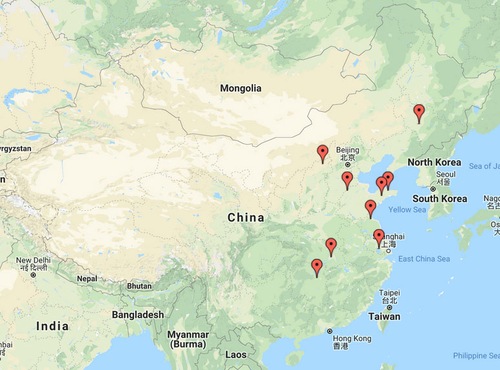 Ms. Feng Xiuqin was arrested at home by officers from the Guliu Police Station on December 26, 2018.

Mr. Gai Guangsheng, 70, was taken to the Laiyang Detention Center.

When Ms. Xu was taken to the No. 4 Detention Center, the director refused to accept her.

Ms. Liu Shufang was sentenced to a three-year prison term.

Ms. Mei Jin, Ms. Xiao Zheng, Ms. Xiong, and Ms. Liu were arrested by officers from a police station in the Wuchang District on December 26, 2018. Their homes were ransacked, and cell phones, computers, printers, Falun Gong books, and other personal belongings were confiscated.

Mr. Zhu Puzhao was tried by the Louxing District Court on July 5, 2018. He was recently sentenced to a three-year prison term and is being held in the Xianrenge Detention Center.

Ms. Deng, in her 80s, was sentenced to a one-year prison term and is currently under house arrest.

Ms. Wu Fengyu was arrested by officers from local 610 Office on December 22, 2018, for talking to people about the persecution of Falun Gong. She is being held in the Wuxi City Detention Center.