(Minghui.org) Today's news from China includes incidents of persecution that took place in 10 cities or counties in 6 provinces. According to this report, 10 Falun Gong practitioners were subjected to mistreatment during their detention, and at least 8 were illegally arrested. 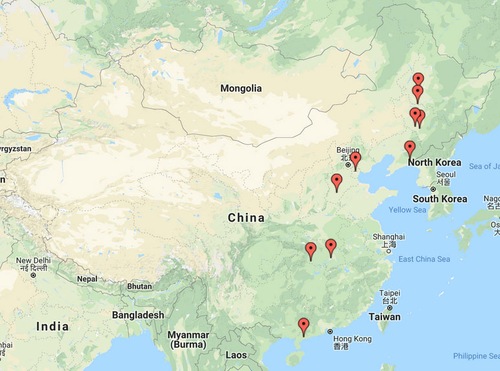 Mr. Wu Zhaoqi and his aunt Ms. Lin Yanmei, from Shuidong Town in the Dianbai District, were arrested on August 29, 2018. Mr. Wu's mother, Ms. Lin Lizhen, was arrested on the evening of August 31.

The three practitioners are being held in the Maoming City No. 1 Detention Center.

Ms. Lin Yanmei went on a hunger strike. She experienced severe physical discomfort and passed blood in her stool on November 15.

When Mr. Wu refused to do hard labor in the detention center, he was beaten by inmate Li Binglong, who was in charge of the cell.

Ms. Zheng Hongjun and her husband Mr. Zhao Wenguang were arrested by officers from the Dong'an District Police Department on the morning of November 9, 2018. Their home was ransacked.

The couple was released on bail that evening.

Mr. Gao Guoqing from Xinzhao Town was arrested by officers from the Sidalin Police Station in the Daoli District, Harbin City, on November 9, 2018. His home was ransacked.

Mr. Gao is being held in the No. 4 Detention Center.

Mr. Yan Zhonghua was arrested by railway police at the Changchun City Train Station on December 8, 2018. He was searched and his ID card, keys, leather bag, and other belongings were confiscated.

Mr. Yan is being held in the Changchun Detention Center.

Ms. Huai has now returned home, but is confined to a wheelchair as a result of severe abuse in prison. She cannot talk, is very weak and thin, and cannot take care of herself.

Ms. Wang Shuqing from Simenzi Town was arrested at home by officers from the Fengcheng City Domestic Security Division on the evening of December 14, 2018. Her printer and other personal belongings were confiscated.

Mr. Hao Liushun and Ms. Han Guiying were arrested at home on the morning of December 13, 2018, and taken to the Dongxin Police Station in the Hedong District.

Ms. Huang Yu'e and her husband from the Caiyou Residential Community, Dagang Oilfield, were arrested at home by officers from the Dagang Domestic Security Division and Hongqilu Police Station on the morning of December 12, and their home was ransacked. Her husband was released that afternoon, while Ms. Huang was taken to the Binhai New Area No. 3 Detention Center.

Ms. Ma Shufen from the Beichen District was arrested on December 4. Her home was ransacked. She is being held in the Beichen Police Department.

Mr. Cao Zhiwu from Julu County, Hebei Province, was arrested by officers from the Yongfeng Police Station, Haidian District in Beijing, when he was buying a train ticket at Xingtai Train Station on December 12, 2018. He was taken to the police station.

Ms. Yang Zhaoqin and Ms. Liu Xuecui were arrested by officers from the Mishi Town Police Station, Jiangling County, Jingzhou City, on November 27, 2018. They were held in the Songzi City Detention Center for 15 days, before being transferred to Gong'an County. Their current whereabouts are unknown.

Ms. Xia Huanzhen has been held in the Ankong Hospital for eight months. She was tried by the Wuhan City Intermediate Court on November 23, 2018, and sentenced to one year in prison two days later.