The congress was held at the Dan Hotel in Tel Aviv September 2-6, 2018. Mr. Matas presented a poster on the subject of state-sanctioned forced organ harvesting in China, which mainly affects Falun Gong practitioners, as well as other prisoners of conscience.

For more than a decade, Matas and former Canadian Secretary of State David Kilgour have been involved in investigating the subject, and the two have published their findings asserting that organ harvesting crimes have been and are taking place in China. Together with investigative journalist Ethan Gutmann they later produced an update to the original investigative report.

During his visit to Israel, Mr. Matas also met with a director in the Ministry of Health and a number of representatives from the healthcare system, as well as with representatives from human rights and law organizations. He also met with lecturers at the Faculty of Health Sciences at Ben-Gurion University of the Negev and lectured to medical students.

1. Transplant tourism to China should be prevented – in Israel this issue was already regulated in 2008 when the Israel Transplant Law (Organ Transplant Act) was enacted due to the alarming evidence [of people receiving questionably-sourced organs in China] already made public.

2. Hospitals and universities should not participate in these crimes by cooperating in transplantation with their counterparts in China, in order to not grant legitimacy to the crime and to ostracize from the medical community those doctors who participate in forced organ harvesting. That means not attending transplant conferences in China, not allowing transplant surgeons from China to present their research at conferences abroad, and not allowing them to train in countries outside of China.

Mr. Matas' poster on the subject of organ harvesting by the Chinese regime – whose victims are mostly prisoners of conscience, most of whom are Falun Gong practitioners – was of considerable interest to the conference attendees. Many studied the poster for a long time, while others took a picture of the poster to read later. 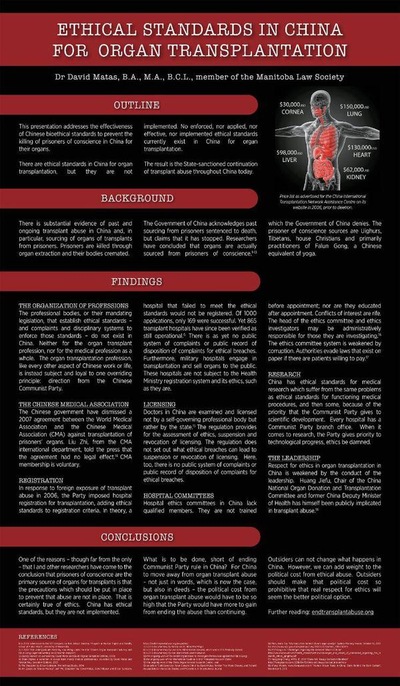 A number of people lingered and asked questions. The two most common questions were: What evidence is there for forced organ harvesting in China? Is it still happening today?

Mr. Matas replied by explaining that their conclusions are based on the large numbers of transplants, evidence that was collected and compiled from reports published by medical centers in China. There is no other plausible explanation for the source of the organs used for the huge number of transplants performed in China. These figures are much higher than the figures the Chinese government provides for any other possible source of organs, such as death row prisoners or voluntary donors.

The evidence that forced organ harvesting continues, according to Matas, is the large discrepancy in numbers. The Chinese government changes its version regarding the source of organs every few years and denies the claims of organ harvesting from living and healthy people, mostly prisoners of conscience – the largest group of which are Falun Gong practitioners – but is unable to explain the huge gap in the data between potential legal sources and the number of actual transplants taking place. Matas also asserts that “[in China] there are no mechanisms there that can guarantee there will be no abuse, even to this day.”

An insurance agent for medical claims from an Asian country said that he frequently traveled to China and met with transplant surgeons to collect evidence for the insurance cases he was involved in. At first, he did not believe that China had a practice of forced organ harvesting administered by the state itself, but after a long discussion with Matas, his disbelief seemed to have been shaken.

A jurist from another Asian country who is serving as a diplomat was interested in the subject and talked to Mr. Matas at length. She said she would tell her government about the organ harvesting and the persecution of Falun Gong in China. 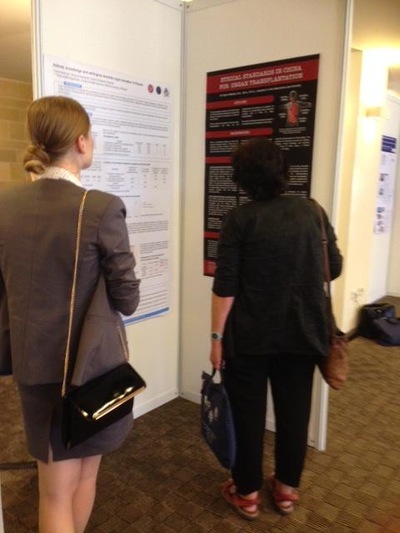 Faculty of Health Sciences, Ben-Gurion University of the Negev

David Matas has been tireless in his efforts to convey his message about forced organ harvesting in China to the international medical community and to academicians in the medical field.

It turns out that many at Ben-Gurion University of the Negev were already familiar with the subject, wanted to learn about it in more depth, and were eager to pass on the message to senior officials in the fields of nursing and transplantation at the Ministry of Health.

About 30 medical students from abroad (including the US, Canada, and Australia) and senior lecturers watched the 22-minute film “Medical Genocide” and heard a comprehensive lecture by Matas on his investigations with David Kilgour and Ethan Gutmann on the issue of state-managed organ harvesting in China and its implications for other countries. 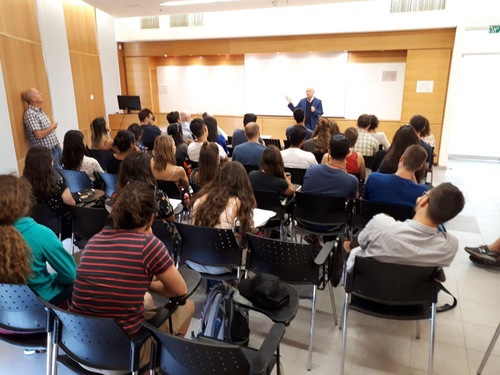 Medical students saw the film “Medical Genocide” and heard from human rights Attorney David Matas about the forced organ harvesting in China, which is carried out by the regime itself.

“Benefiting from Dafa and Tests in Cultivation”