(Minghui.org) According to the family of Chinese-Canadian Falun Gong practitioner Ms. Sun Qian, Ms. Sun is scheduled to appear in court at 9 a.m. on September 12, 2018, in Beijing. Falun Gong practitioners across Canada have been rallying in front of local Chinese embassy or consulates, calling for her unconditional and immediate release.

Practitioners in Ottawa and Toronto held a rally and a press conference on September 10. 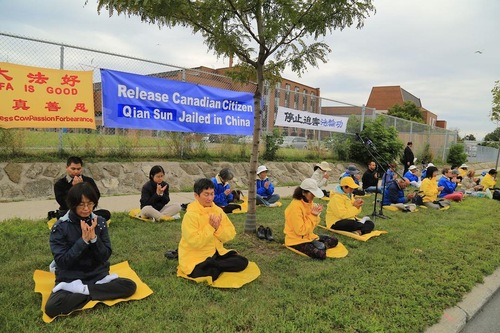 Practitioners call for the release of Ms. Sun Qian in front of the Chinese Embassy in Ottawa 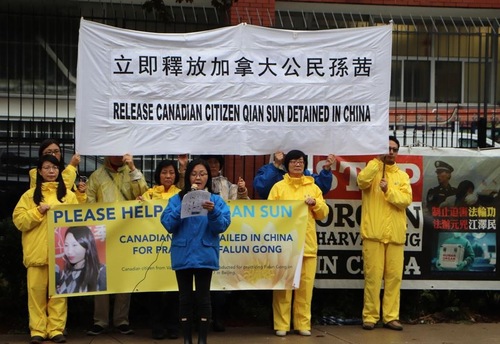 Practitioners hold a press conference in front of the Chinese consulate in Toronto.

Irwin Cotler, former Canadian minister of justice and renowned international human rights lawyer, who acts as Ms. Sun's counsel in Canada, released a statement on September 10. He said that imprisoning Ms. Sun is "a dramatic case study in this criminalization of innocence—the persecution and prosecution of an innocent woman, not for anything she has done, but for whom she is: the bearer of truth, compassion, and tolerance." He called for her unconditional release.

In his statement, he listed 10 ways in which Ms. Sun Qian's rights have been violated including: Criminalization of her fundamental freedom of belief; standing violations of her fundamental rights of freedom of expression, assembly, and association; arbitrary and illegal arrest; prolonged and illegal detention; torture in detention threatening both her physical and mental wellbeing; reversal of presumption of innocence; denial of the right to counsel; pattern of harassment, intimidation, threats against and arrests of over 11 lawyers who have sought to take up her case, etc. 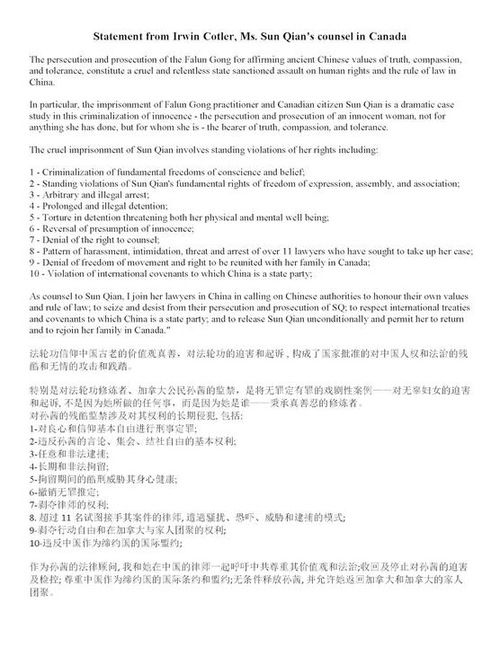 Former cabinet minister David Kilgour spoke at the rally held in Ottawa. He said, “Her lawyers were evidently pressured not to defend her. This is not a surprise, as lawyers who defend Falun Gong are usually persecuted.” 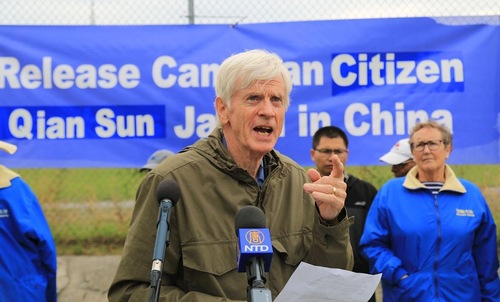 David Kilgour speaks in front of the Chinese Embassy in Ottawa to call for release of Ms. Sun Qian.

He emphasized, “What has happened violates every principle of rule-of-law nations everywhere.” He called for the immediate and unconditional release of Ms. Sun and called for the Canadian government to do its utmost to secure her release.

Secretary General of Amnesty International Canada Notes That the Persecution Is Widespread in China and Causes Canadians Pain, Too

Neve said the court proceedings for Ms. Sun “will inevitably fall far short of the requirements for a fair trial, guaranteed in international law.

“We call on China to unconditionally release Sun Qian, and all other Falun Gong practitioners unjustly detained in the country. It is time for justice to prevail.” 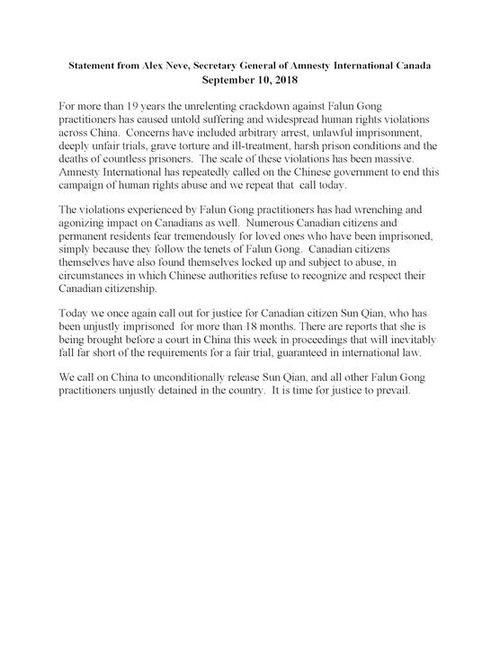 According to Li Xun, president of the Falun Dafa Association, protests are taking place across Canada, including Ottawa, Vancouver, Toronto, Calgary, Edmonton, and other cities.

He said that the persecution of Falun Gong, in particular the arrest, detention, torture, and brainwashing of Canadian citizen Ms. Sun Qian, allows Canadians to clearly understand the nature of the communist regime.

The statement notes that the Chinese communist regime's persecution of Falun Gong violates not only international law—including the “International Covenant on Civil and Political Rights” China signed—but also its own laws. Practitioners in Canada call for an end to the illegal deprivation of Ms. Sun Qian's rights and fundamental freedoms and call for her immediate release.

Ms. Sun Qian, 52, had a very successful career as the founder of Beijing Leadman Biochemistry Co., Ltd. She was twice placed on China’s Hurun Report of wealthy individuals. Her success, though, came at the expense of her health, and nothing helped her heart palpitations, liver problems, and depression.

Her symptoms disappeared shortly after she began practicing Falun Gong in 2014. Her new faith, however, landed her in police custody. Ms. Sun was arrested at her home in Beijing on February 19, 2017. She has since been detained in the Beijing Number One Detention Center.

During her detention, her family has hired 13 lawyers, but 11 of them have quit due to pressure and intimidation from the authorities. The two newly-hired lawyers are also being pressured.

When Ms. Sun’s lawyer visited her on May 27, 2017, he noticed visible bruises and cuts on her wrists from the handcuffs. After the visit, she was pushed down by four male guards and sprayed in the face with a pungent chemical, according to Ms. Sun’s sister, Sun Zan.

Ms. Sun has been tortured in other ways. Last May, she was kept in handcuffs and shackles 24/7 for about two weeks, even when she went to sleep and to the bathroom. She was also tied to a metal chair and pepper sprayed, after which she wasn’t allowed to change her clothes for 10 days. Earlier in her incarceration, she was periodically locked in a small room in solitary confinement.

Over the past 18 months, Ms. Sun's ordeals have earned the widespread attention of Canadian citizens, politicians, and the media as well as the international community.