The works in the exhibition, all by artists who practice Falun Gong, depict the beauty of the cultivation practice of Falun Gong and the tragic human rights abuses taking place in China against those who refuse to give it up. Sadly, Falun Gong has been brutally persecuted by the Chinese communist regime since 1999.

Representatives from the Rezekne City Council, County Council, Central Library, and other city authorities took part in the opening ceremony. Among the guests were a member of the Latvian Parliament; supporters of the exhibition and sponsors from Rezekne; representatives of Latgale Regional Television and local newspapers “Rezeknes Vestis”, “Panorama Rezekne”; and Rezekne Academy of Technologies administrators, lecturers, and students.

In Deputy Rector Gunars Strods' introductory remarks at the exhibit opening, he said: “I hope that not only our students will benefit, but the whole city and the whole society. Through the art presented here, we are made aware of events that do not touch us daily but that definitely affect us.” He noted that the works that show aspects of the communist party's persecution of Falun Gong “make us here in Latvia remember our own history.”

The Rector of the Academy, Edmunds Teirumnieks, emphasized that it was a challenge to hold this exhibition because of its scale. At the same time, they were aware of the profound meaning and value of the exhibition, so they were definitely in favor of it. “It’s not a secret, even today as we watch what is happening in China. We can talk about the positive propagated from one side and what we hear about the repression that is taking place within this regime. We can analyze this exhibition ourselves, evaluate it, especially because we cooperate with Chinese universities. On the other hand, through this exhibition, we can also get an insight into their politics,” he said.

Lauris Fisers, the curator of the exhibition, briefly presented the ideas behind the exhibition, the themes of the artworks, and the artists. He said that Truthfulness-Compassion-Forbearance are universal principles that transcend time, space, religion, and politics. The main artist, Chinese sculptor Professor Zhang Kunlun, said: “The dynasties and nations are mostly remembered thanks to their achievements in the arts. The art of Ancient Asia honored the Divine.” Lauris added that the artworks depict harmony, grief, courage, and justice, and that the artists have tried to emphasize human beings' best qualities. They also portray the harm that can result from people giving free rein to their bad qualities.

Guntars Skudra, the head of the Education Department of Rezekne County Council, said, “We are pleased and glad to see this world-class exhibition here in Rezekne. Thank you for this exhibition and for the goodness that you bring to this city.” 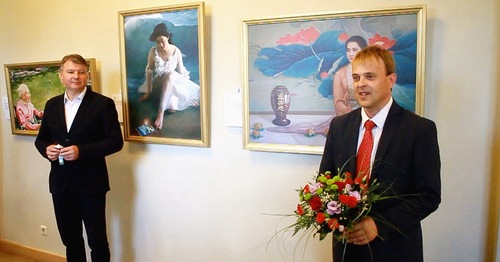 Guntars Skudra, head of the Education Department of Rezekne County Council (on right)

Karlis Poznakovs, the head of the Public Relations Department of the Rezekne City Council, said that seeing, in the artworks, harmony, peace, and goodness under persecution and subjected to such misery and aggression gave him a “surreal feeling.” He also noted that the main Falun Gong teaching, Truthfulness-Compassion-Forbearance, should be the guiding principles in our society and in our lives. 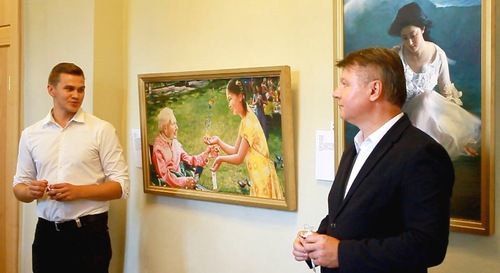 Karlis Poznakovs, the head of the public relations department of Rezekne City Council (on left), and Deputy Rector Gunars Strods (on right)

Juris Vilums, a member of the Latvian Parliament, addressed the audience and remarked that members of the Latvian Parliament had heard from Canadian representatives about the Chinese Communist Party’s atrocities in China and spoke about the problems reflected in this exhibition. He said that, although it all seems far away from us, we should not be distracted, because we can never know when it will turn to us. “So be cautious, tolerant, and kind, but at the same time, also politically responsible.” 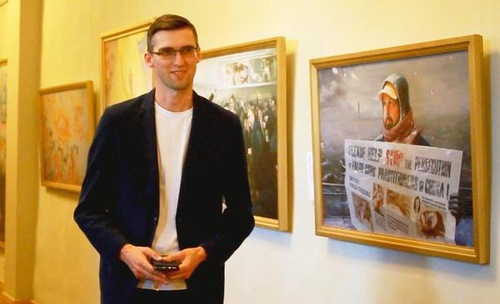 Professor Vladislavs Paurs, a well-known artist in Rezekne, was deeply moved by the works' purity and technique, as well as their deeper meaning. He said that despite the persecution in China, the exhibition offers hope. He noted, “This exhibition is really fascinating and will not leave anyone indifferent.” 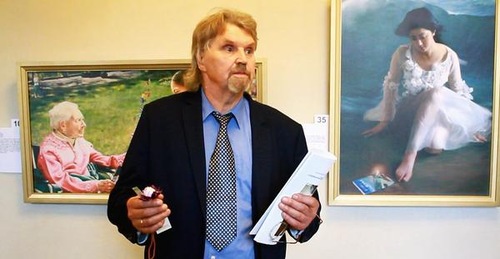 Professor Irena Silinevica said, “It was a discovery for me. What is the fate of this spiritual movement and how a regime is trying to destroy it. It touched me very deeply. Of course, I am glad that I can be here to see it, and this will give me deeper insights. I want to thank the organizers of the exhibition for speaking about it around the world through the art.” 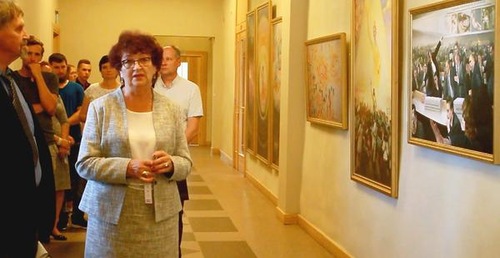 The Deputy Rector agreed that the exhibition would not leave anyone indifferent, that it was an emotionally very impressive exhibition. His own particular favorite was the painting “Mending the Cosmos.” Each time he looked at it, he said, he discovered more details. In an interview, he said that he had heard about the persecution in the past and how Falun Gong practitioners around the world are trying to put an end to the persecution in China. He expressed the hope that this tragic persecution would end and wished the practitioners in China endurance and strength. 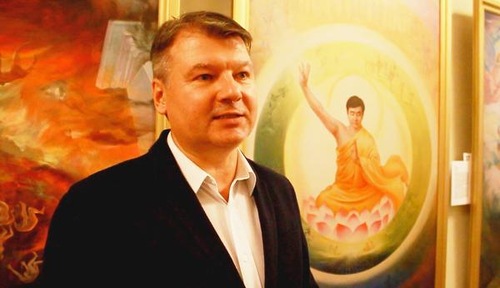 Juris Vilums, Latgale’s social activist (Latgale is one of the four historical and cultural regions of Latvia) and Member of Parliament, said in an interview that he had heard about the Falun Gong movement before and therefore already had an idea of what would be shown. Mr. Vilums said that the paintings that depicted the atrocities taking place in China as well as those that show good defeating evil, had the greatest impact on him. He expressed the hope that more people in the West would talk about it and then there would be hope that the whole world would be able to help those who are suffering from this evil.

A reporter from the newspaper “Rezeknes Vestis” said that he has covered many events and exhibitions, but this was the first to move him so deeply. He also wanted to learn more about Falun Gong. He said that the organizers of the exhibition—Falun Gong practitioners—were “lighting the way” and wished them good luck and success.

The exhibition at the Rezekne Academy of Technologies will run until October 6, 2018.

“Taiwanese Veterinarian: My Perspective on Life Changed after I Took up Falun Dafa”