(Minghui.org) “Qigong is a science, and it is a higher science,” wrote Master Li Hongzhi, founder of Falun Dafa (also known as Falun Gong), in Zhuan Falun.

Connected with the ancient wisdom of traditional Chinese culture, Falun Gong is not just an average Qigong practice that focuses on healing and fitness. It offers life-changing improvement in one's physical and mental health through a disciplined spiritual practice based on the principles of Truthfulness-Compassion-Forbearance.

While the idea of a spiritual practice might resonate instantly with some, others might find it too mystical-sounding or even superstitious and thus stay away from it. Until all other measures fail, that is...

Cardiologist: A New Lease on Life 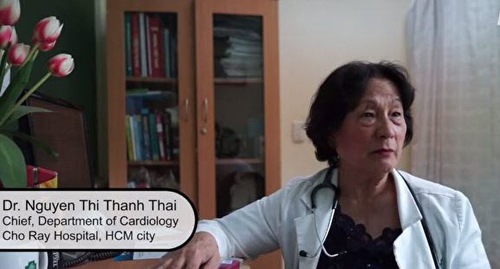 The first time Dr. Nguyen Thi Thanh Thai heard of Falun Gong was in 2002. A colleague had recommended Falun Gong and said that she fully recovered from thrombocytopenia after practicing it for a few months. Her colleague had suffered from this condition of abnormally low levels of platelets in the blood, and her limbs often bled.

Dr. Nguyen is a cardiologist. She wasn't convinced that a traditional cultivation method could be effective.

Twelve years later, she had major heart surgery after a recurrence of pneumonia. Because she'd had rheumatic fever when she was 10, she needed two artificial heart valves.

Dr. Nguyen was the chief of the Department of Cardiology at Cho Ray Hospital in Ho Chi Minh City by then. She went to the National Heart Institute in Malaysia for the surgery because she knew some fellow members of the Asian Pacific Society of Cardiology (APSC) there. The center is also known for its advanced facilities.

Dr. Nguyen went home to Ho Chi Minh City 10 days later. She was happy that she had a new mitral valve and a new aortic valve in her heart. However, she started to run a fever within two days, which lasted for about four months.

“When I started panicking, a friend visited and told me, 'I have practiced Falun Gong for about two months. Now I'm illness-free. It's amazing! I used to take six nerve pills every day and a few sleeping pills before I went to bed. Now I don't need any medication.'”

Dr. Nguyen looked through the Falun Gong materials her friend gave her. “I was surprised. Good heavens! This was the same information Dr. Thai had given me 12 years ago!”

Having just had a near-death experience, Dr. Nguyen was more open-minded this time. She read the Falun Gong book and decided to take up the practice. Now she gets up at 4 a.m. and does the five exercises before she goes to work. She also studies the teachings with a group sometimes.

“The more Dafa books I read, the more noble I feel I am becoming. It comes from inside out. Dafa has awakened in my heart a lot of things that I didn't know were there,” said Dr. Nguyen.

“Dafa has saved me. I recovered in just a few months. I made a full recovery without even knowing when it happened! I have not had a fever ever since taking up the practice. I don't have to take Digoxin, a diuretic, and vasodilators anymore. I don't need any antihypertensive drugs, either.”

“When I went back to work, my colleagues asked me, 'How come you have become younger and more beautiful?' I responded, 'Because I'm practicing Falun Gong!'”

Xiao Jing is a senior manager in charge of over 700 state-owned enterprises in China. In this powerful position, she often took bribes and enjoyed a very luxurious lifestyle.

All of a sudden, in the winter of 1998, she fell severely ill. She was just 38. Xiao Jing lost 50 pounds in a short time. No drugs had any effect on her condition. Doctors told her that they wouldn't know where to start if they were to send her for surgery.

The Beijing Medical University Third Hospital diagnosed her with a stomach ulcer and colitis. She developed another strange symptom during her hospitalization: non-stop flowing of saliva. Doctors told her that her problem wasn't curable and that it might be associated with the brain.

Shortly after Xiao Jing went home, she lost the ability to walk. She felt that her days were numbered. Her child was only seven years old. It was hard to imagine that she would soon lose everything. Her child would lose her mother, and her parents would have to see their daughter die before they did.

She discussed her will with her mother-in-law, who offered her a copy of Zhuan Falun. Her mother said to her, “You still have hope. Believe in Falun Dafa and be a good person. Start cultivating.” Her mother-in-law also told her that her diseases with no names might have stemmed from karmic retribution, or the traditional principle that what goes around comes around.

Xiao was a “model student” under the Chinese communist system of education and had been promoted to senior manager. She disagreed that she wasn't a good person. However, even though she didn't believe in any Qigong practice, she had no other alternative. She gave the Falun Gong exercises a try.

As she was doing the exercises, Xiao felt her body surrounded by a strong energy field. She read the book Zhuan Falun and realized that she wasn't as good as she'd thought. She learned that Truthfulness-Compassion-Forbearance were the key principles to adhere to.

Her strange diseases disappeared within a week. Along with them went her atheistic notions. She knew the importance of being a truly good person and how to be kind.

The first thing Xiao Jing did when she recovered was to return money. She returned the money she owed personally, she returned illegal profits to customers, and she repaid bad debts to other enterprises. She didn't lose her temper with her subordinates, stopped taking any bribes, and stopped going to night clubs. She declined all gifts from customers and business partners. 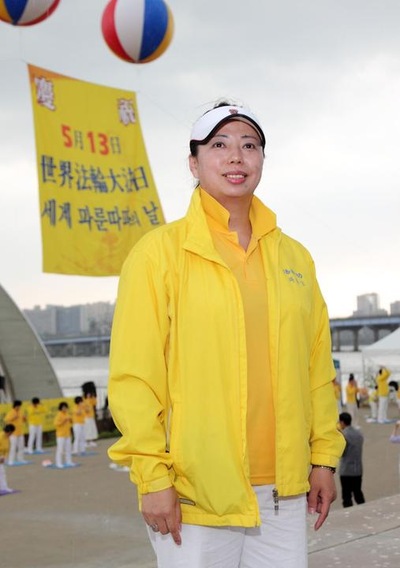 Huang Xiaomin, a renowned swimmer in China, won the gold medal for the 100-meter breaststroke at the 1996 Seoul Asian Games when she was only 17 years old. She earned a silver medal at the 1988 Seoul Olympics. From 1986 to 1990, she won 11 gold medals and was one of “Asia's Top 10 Athletes” in 1987. She is a swimming coach in South Korea and enjoys a life free of the usual pains high-achieving athletes usually live with after they retire.

Things weren't that way when Ms. Huang retired, however. Demanding training schedules left her with many health issues: a herniated lumbar disc, rheumatism, and arrhythmia. Paralysis was a real danger. She had to retire at 23.

Her health didn't improve when she retired. She was bedridden for about two weeks each time her back pain flared up. She often couldn't move her neck in the morning. Her mother cried, “You are barely over 20, yet you have as many health problems as someone over 50! What does that mean for your future? If something happens to you, I cannot live alone.”

Although Huang Xiaomin went to many hospitals, her health problems could never be definitively pinpointed.

An older woman in the neighborhood told her, “Xiaomin, you should practice Falun Gong! Only Falun Gong can save you!” Huang Xiaomin took her advice and learned the Falun Gong exercises.

As she did the second exercise nearly a week after she started practicing Falun Gong, she felt cold air coming out of her hands. She felt quite comfortable afterwards. Her body returned to normal. She was shocked—there were many Qigong practices in China and she had never believed in any of them. However, her personal experience with Falun Gong changed her mind.

Huang Xiaomin once told a reporter, “If I didn't practice Falun Gong, I wouldn't be alive today. Falun Gong gave me a second life and an opportunity to experience the magic of Falun Dafa. No words can describe my gratitude to Master Li Hongzhi, the founder of Falun Dafa!”