(Minghui.org) “Sitting on a small stool” is a form of torture used in Prison No. 4 in Inner Mongolia Autonomous Region. The stool is 6 or 7 inches high and very narrow—barely wide enough to sit on. Over the years, almost all Falun Dafa practitioners illegally detained in this prison have endured this form of torture. 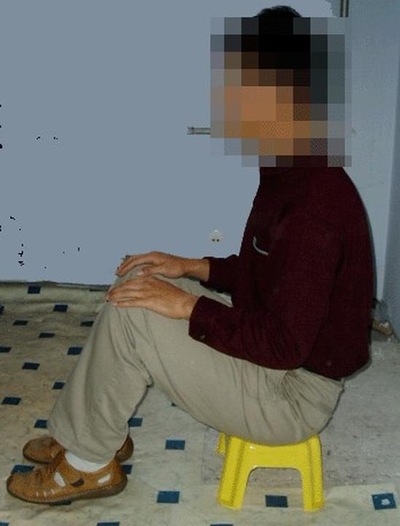 Formerly detained practitioners have described this stool: “It appears inconsequential at first sight, giving the appearance that the one sitting on it is treated mildly. But it is indeed a cruel form of torture on the body and mind. That kind of pain is beyond description. It makes a single day feel like a year and that living is worse than death.”

Within an hour of sitting on the stool, one feels discomfort followed by pain. The pain becomes excruciating, like countless arrows piercing through the lower body and worms gnawing on the bones. Some practitioners have been forced to sit on this small stool every day for months, a year, or even two years. Some have developed open, bleeding, festering wounds on their buttocks—some with their bones protruding.

Some have said that the suffering makes one second really long and a minute endless.

According to inmates in the prison, this form of torture was originally invented by a man convicted of organized crime who was sentenced to death. He saw that the types of torture the guards had been using were not effective enough, and he came up with the “small stool.” The guards were impressed and employed it.

Whenever the guards consider a prisoner hard to manage, they force him or her to sit on the small stool. The prisoner usually collapses within several hours or a day. The guards are much more cruel when it comes to Falun Dafa practitioners, subjecting them to this torture as soon as they arrive at the prison. Whoever becomes “transformed” is sent to do slave labor with other inmates; whoever refuses to be “transformed” is tortured indefinitely.

It is reported that some practitioners have been tortured on the small stool for as long as four years.

“I Crawled to the Exercise Site and Walked Back Home”