(Minghui.org) “The exhibition is breathtaking, it touches your heart, it pierces through your soul, and eliminates any other feelings but compassion, love, empathy, and kindness. It amplifies a spark of divinity that every human being cradles within!”

The above was written by a patron of the “The Art of Zhen, Shan, Ren” (Truthfulness, Compassion, Forbearance) art exhibition in Sofia, Bulgaria last month. The capital city was the last stop of the Bulgarian tour of this renowned art exhibit, which was held from July 2 to July 22.

Because the exhibition depicts the brutal persecution of the Falun Gong meditation practice by the communist regime in China, its embassies around the world often attempt to pressure venues not to host the exhibition.

The exhibition also happened to coincide with the “16+1” meeting in Sofia between China and countries of the former communist coalition of Eastern and Central Europe on July 6 and 7.

Despite the interference, the exhibition was in the end hosted by Bulgaria Hall, one of the most famous concert venues in the country.

“After the museum’s refusal to host the art exhibition just two weeks before its opening, finding a new venue was a matter of utmost urgency. And it was made possible thanks to Tzena Boyadzhieva–Curator at Bulgaria Music Hall’s gallery and granddaughter of Zlatyu Boyadzhiev–one of the most prominent Bulgarian artists,” said exhibition organizer Alexandra Boteva.

The exhibition was also extended through July 22, allowing more visitors to enjoy the artwork. 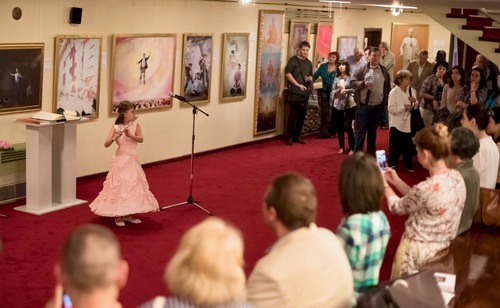 “It is time for us to realize we have to be kinder, more compassionate, more genuine, and more virtuous,” said Boyadzhieva during the opening ceremony on June 2. “When [the exhibition organizer] approached me and shared about the problems she faced in other places, I felt she was sent by God, because this is a sacred place that protects and shelters other bright things that we will get to know through these paintings.”

The opening ceremony also included a performance by children from the Sofia School of Music. Among the VIP guests was the artist Ivan Yahnadzhiev, who presented a special gift to the exhibition organizer–a painting with a symbolic message to “keep soaring elegantly, weightlessly, and boundlessly.”

Guests Moved by Spirituality in Artwork 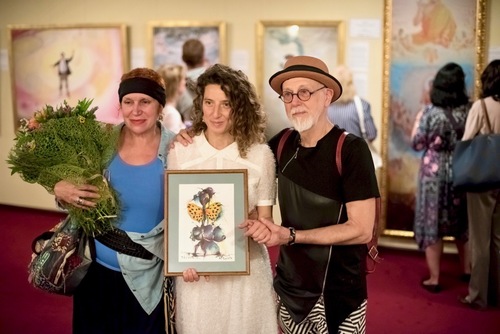 On July 5, a symbolic concert was held at the same venue: a presentation of the oratorio "Melancholic Beauty" by Georgi Iliev, dedicated to the 75th anniversary of the rescue of Bulgarian Jews during World War II.

Among the guests was Israeli ambassador Lilian Irit. After the concert, surrounded by the exhibition’s canvases, the ambassador shared that she was well aware of the persecution of Falun Gong.

Another guest, Bulgarian folk singer Dessi Dobreva, exclaimed after hearing about Falun Gong’s principles of Truthfulness-Compassion-Forbearance, “Why don’t we all have more of that?”

Borislav Sandov, co-leader of the Greens political party, attended the closing ceremony on July 19. “I sense high spirituality in the gallery. I will take this memory with me,” he said. 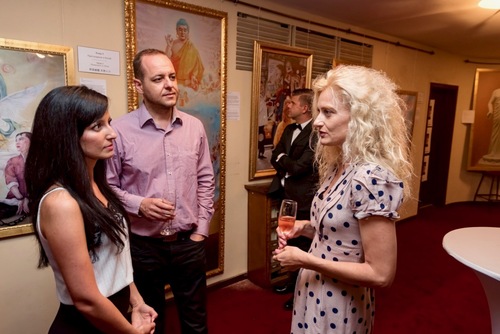 Zaritza Georguieva, an international coordinator with the Greens party, said, “The information that comes from China is mainly what the communist government wants us to know. This is why I am happy to see that Falun Gong adherents manage to have their voice heard.”

She also expressed her admiration for Falun Gong practitioners’ campaign in the European Parliament in Brussels to pass a resolution condemning China’s killing of practitioners for organs. The resolution was adopted in December 2017. 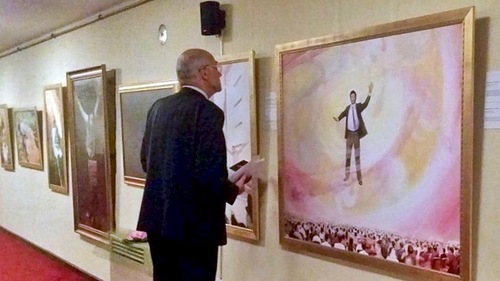 Ivan Ivanov, former member of the Bulgarian Parliament and currently Chairman of the Energy and Water Regulatory Commission.

Patrons to “The Art of Zhen, Shan, Ren” in Sofia included Ivan Ivanov, a former legislator and the current chairman of the Energy and Water Regulatory Commission. “I am struck by the deep impact of the paintings in this impressive art exhibition, calling for truthfulness, compassion and forbearance,” he said.

Ivanov first encountered Falun Gong during his first mandate as a Member of Parliament (2001-2005). Back then, practitioners reached out to him because of his outspoken political views against communism. “I’ve done what I could. I’ve always been supporting the effort to stop the injustice against those peaceful people in China,” said Ivanov.

Among the hundreds of visitors were teachers, architects, students, and many musicians with their kids, who rehearsed daily at Bulgaria Music Hall.

Many shed tears after seeing paintings depicting the torture of Falun Gong practitioners in China for their faith. Others shared their own stories of loved ones who suffered under communist oppression in Bulgaria.

“Exceptionally interesting exhibit. These are things [that took place] during the communist regime in our country as well,” wrote artist Valentin Binchev in the guest book.

Architect L. Yotov commented, “This exhibition is dedicated to a noble cause, and the quality of the paintings and their arrangement are brilliant! All that deserves respect and admiration! Gratitude to the artists and the organizers!” 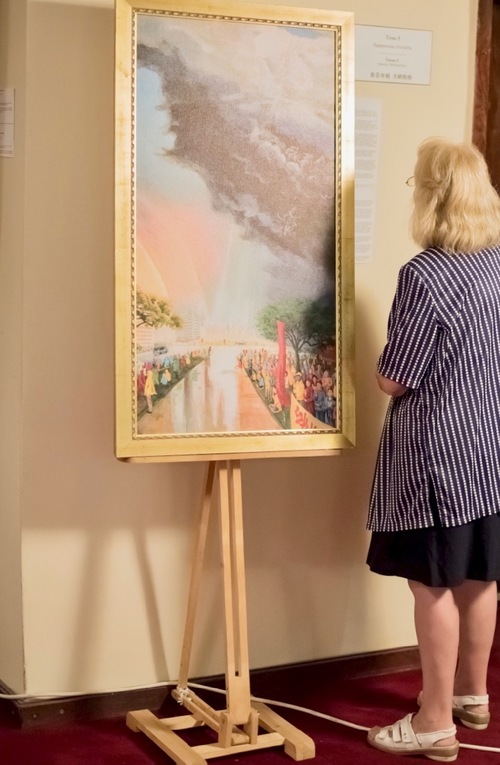 “Clarifying the Truth from a Different Angle”