(Minghui.org) Many Chinese tourists visit the Galeries Lafayette in Paris year round but especially in the summer. Every day, Falun Gong practitioners in front of the store are raising awareness of the Chinese Communist Party's (CCP) persecution of Falun Gong. They distribute flyers and newspapers and help Chinese tourists quit the CCP and its affiliated organizations. 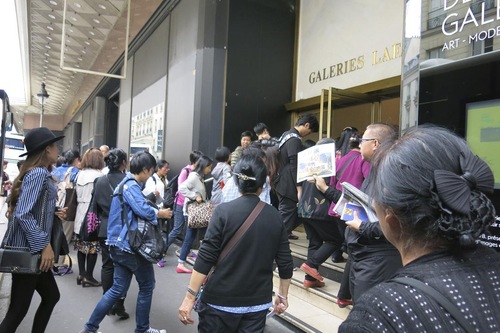 “The CCP Misleads and Deceives the Chinese People”

Ms. Chen is one of the Falun Gong practitioners raising awareness at the Galeries Lafayette.

One day she met Mr. Zhang from Weifang, who said, “The Party misleads and deceives people. It confuses the concepts of 'country' and the 'Party' form of government. It lies to the Chinese people. Nowadays, Chinese people basically have no beliefs. They only know what to eat.”

Ms. Chen said, “There are not many people in China who understand the current situation like you do. For example, I just talked with a Chinese tourist. When I told him about the CCP persecution, he said, 'The food here is very expensive. If you pay for our dinner, I will listen to you and quit the CCP.'”

Zhang responded, “Look, this is a typical Chinese nowadays. Everyone takes money very seriously and has no belief. They won't listen to anything you say. They think so little of themselves.”

Ms. Chen said, “We will not say such things. We are Falun Gong practitioners. We do not blame them because they do not know the truth about Falun Gong.”

Zhang replied, “They are not so ignorant. They are mainly brainwashed by the communist party. They cannot distinguish between the Party and the country. They still don’t understand the Party’s persecution of Falun Gong. If they really knew the truth, they would not behave like this.”

“Many people in China don’t know the truth about the staged Tiananmen Square self-immolation incident. They only know what the CCP's propaganda says, which misleads many people to hate Falun Gong,” said Ms. Chen.

“Nowadays, many people take their own interests too seriously and don’t think about these issues. It’s hard for you to help them understand,” replied Zhang.

When Ms. Chen asked Mr. Zhang whether he had quit the CCP, he said that he had only joined the Youth League and Young Pioneers and was no longer a member of either one because he had “aged out.” Ms. Chen told him that just because his membership had “expired” didn't count as actively quitting a CCP organization.

“It is an issue of choosing good or evil. One must make a statement on the Epoch Times website. Since the Party is so evil, one should withdraw from it and make a correct choice,” she urged him.

Mr. Zhang said that, in fact, many people think that when one's membership expires, that counts as withdrawing from the Party's organizations. They don’t know that they need to make a declaration.

After Mr. Zhang agreed to withdraw from the Youth League and Young Pioneers, Ms. Chen created a pseudonym for him and posted a withdrawal statement on the Epoch Times website.

The “Tiananmen Self-immolation” Was Staged

Another tourist, Mr. Shen, said that he broke through the CCP's internet firewall to visit overseas websites and liked to read the Epoch Times and watch New Tang Dynasty TV, especially its commentaries. He went to Taiwan ten years ago and got a copy of the Nine Commentaries on the Communist Party and brought it back to China.

Ms. Chen gave him a copy of the newly published series The Ultimate Goal of the Communism. He was very pleased and said that he would bring it back to China. She then asked him if he had quit the CCP and its affiliated organizations. He said that his membership in the Youth League had expired due to his age.

Ms. Chen said that didn't count. After Shen agreed, Ms. Chen gave him a pseudonym and helped him post his withdrawal statement on the Epoch Times website.

Ms. Chen talked with him about the Tiananmen self-immolation incident. Shen is from Beijing and thought that the self-immolation was intentionally staged to frame Falun Gong.

He said, "Tiananmen Square is under tight surveillance. It is impossible for a few people to sit there casually and set themselves on fire. When I saw the news, I thought it was fake. I have experienced a lot of things in Beijing. The CCP deceives people.”