(Minghui.org) Ms. Dou Lina, 59, from Siping City, has experienced persecution ever since Jiang Zemin, the former head of the communist regime, began the brutal suppression of Falun Gong in July 1999. She has been arrested, subjected to forced labor, and tortured, all in the Chinese regime's attempt to force her to give up her belief.

Ms. Dou was arrested in 2008 and sentenced to three years in Heizuizi Prison for refusing to give up her faith.

Upon her arrival at the prison, several inmates dragged Ms. Dou into a cell. Wang Lixin, one of the inmates assigned to watch her, demanded to know whether she still practiced Falun Gong. Ms. Dou did not answer directly, but told Wang that Falun Gong has spread all over the world and that people have benefited greatly from practicing it. Wang reported her response to the prison guards.

The cellmates forced Ms. Dou to sit motionless on a small bench from 5:00 a.m. until 1:00 or 2:00 p.m. the next day. When she moved slightly at one point, Wang pushed her down violently and broke the bench.

Then Ms. Dou was taken to the second floor for brainwashing. She ignored all the slanderous propaganda they tried to force on her. The guard locked her in a cell and demanded that five inmates “transform” her. They tortured her with the death bed. They pushed her onto a bed and tied her limbs to the four bedposts so tightly that her body was lifted in the air and stretched to the limit. 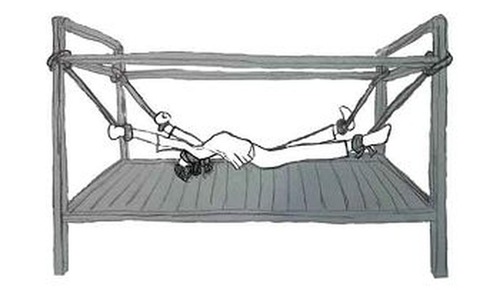 The pain was excruciating. To drown her screams, they turned up the television and played blaring music. Ms. Dou was not allowed to use the restroom and urinated on the bed. Wang soaked a mop with urine and thrust it into Ms. Dou's mouth, breaking one of her front teeth.

Ms. Dou was illegally arrested and taken to a forced labor camp in Beijing in 1999 for appealing for the right to practice Falun Gong.

1997: Benefiting from the Practice of Falun Gong

Ms. Dou recovered from many illnesses after she began practicing Falun Gong in 1997. She believes that her recovery was because she followed the principles of the practice – Truthfulness, Compassion, and Forbearance.