Philadelphia Rally Calls for an End to 19 Years of Persecution

Falun Gong practitioners in Philadelphia held a rally at the Liberty Bell on July 15 to commemorate 19 years of Falun Gong's heroic undertaking to stop the persecution. Tourists from around the world, including those from China, took this opportunity to learn the facts about Falun Gong.

Practitioners started the day by doing the exercises together. They held a photo exhibition documenting the persecution, gave speeches, collected signatures on a petition, and distributed brochures. Eighteen Chinese tourists took this opportunity to quit the communist organizations they had once joined. 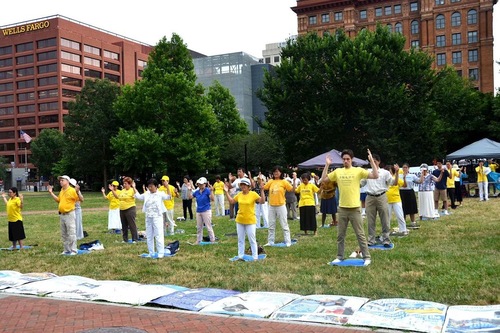 Practitioners do the exercises together near the Liberty Bell before a rally to mark the 19th anniversary of Falun Gong's peaceful resistance to the Chinese Communist Party's persecution.

Speaking Out on Behalf of Falun Gong

At the rally, Alex, a Falun Gong practitioner, recounted the CCP's suppression of innocent Falun Gong practitioners: “The persecution of Falun Gong is genocide. It includes the crime against humanity of forced organ harvesting, where people who believe in Truthfulness-Compassion-Forbearance are illegally arrested, tortured, and killed on demand for their vital organs in the state-run hospitals in China.”

Alex's grandfather survived the Holocaust and the persecution by the Russian Communist Party. Alex said the CCP's forced organ harvesting was even worse. He and his fellow practitioners are determined to expose and stop the persecution. 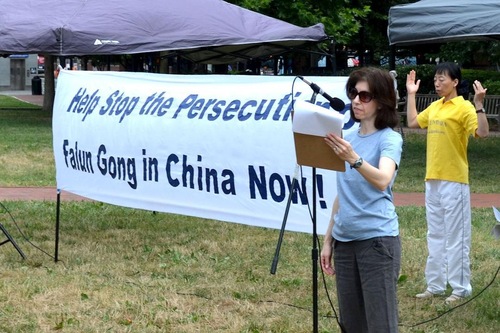 Dr. Jessica Russo of DAFOH said that Falun Gong practitioners in China were the main organ source of organs for the CCP's on-demand transplant industry. She said, “A match can be found within weeks or days, even within 24-48 hours under some circumstances. In the US and other countries with a voluntary donation system, the wait time is normally at least a year.”

She quoted investigation reports by international experts: “Their conclusion: the government performed far more transplants than they acknowledged—a possible 1.5 million transplants over what is now 18 years—shortly after the persecution of Falun Gong began.”

Mr. Mike Harper from Maryland told a Falun Gong practitioner, “I have seen Falun Gong activities in Washington D.C. for over ten years, but I have never stopped to find out anything. Today is the first time I've ever heard about the forced organ-harvesting crime.” Mike signed the petition calling for an end to forced organ harvesting. He said it was very brave of Falun Gong practitioners to face the powerful Chinese regime and expose its lies. 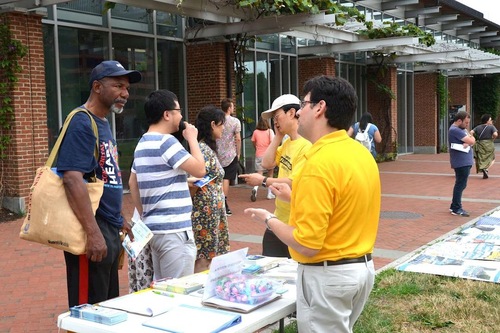 Mr. Mike Harper (first from left) from Maryland praised the practitioners for their courage.

Many tourists from China happened to visit the Liberty Bell that day. Many of them were very interested in the Falun Gong activities. They stopped to read the displays, took informational brochures, and took pictures.

A family of five decided to withdraw from the communist organizations after a Falun Gong practitioner explained the truth about the persecution to them. One of the men in the group said, “We have seen a video about the Self-Immolation on Tiananmen Square. Now we know it was staged to smear Falun Gong.” 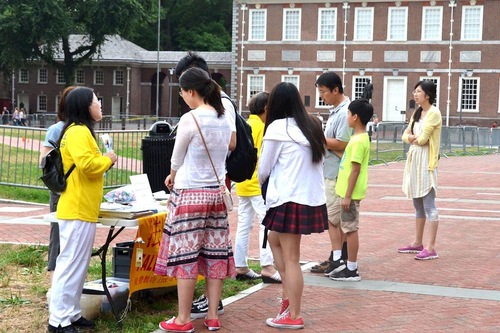 Tourists from China hear the truth about Falun Gong. 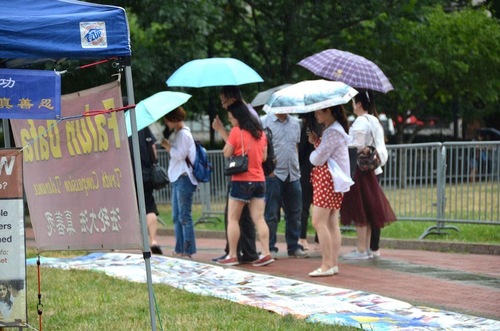 Tourists from China continue to read about Falun Gong even in the rain.

A young couple from China took the initiative to talk to a practitioner. They said the CCP was evil, and they completely supported the petition to stop the persecution.

Even though some Chinese tourists dared not take information brochures for fear of retaliation by the CCP, more and more Chinese have had the courage to find out about Falun Gong and talk to practitioners in recent years. That day alone, 18 Chinese tourists quit the communist organizations.