(Minghui.org) On Tuesday, July 10, practitioners of Falun Dafa (also known as Falun Gong) from all over Israel gathered in front of the Chinese Embassy in Tel Aviv to protest the Chinese communist regime’s persecution of Falun Dafa. 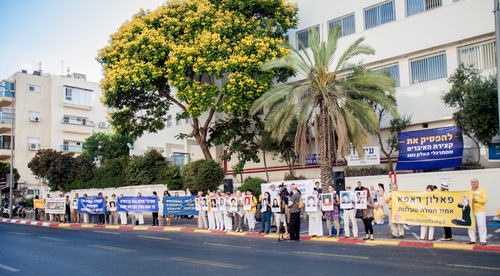 Practitioners call for an end to the persecution.

Falun Dafa is a spiritual practice based on the principles of Truthfulness, Compassion, and Forbearance. It includes five simple meditative exercises.

On July 19, 1999, Jiang Zemin, the former head of the Chinese Communist Party, gave orders that Falun Dafa be banned and set in motion a violent suppression campaign. Since then, practitioners in China have been systematically detained, incarcerated, and tortured for their faith. They are also killed for organs to supply the lucrative organ transplant industry in China.

Many passersby stopped to read the banners. Some came especially to support the protest, and one even traveled several hours on public transportation to participate. 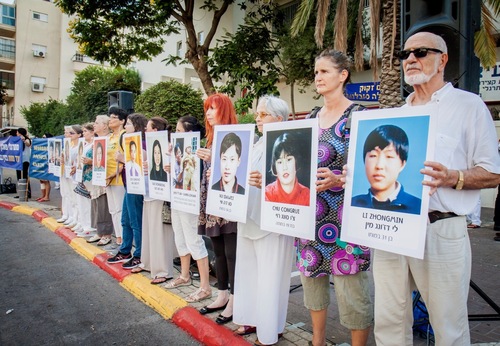 Photos of victims who have lost their lives in the persecution

There were several speakers at the rally. Vadim Berstetsky, who leads the Falun Dafa Association in Israel, said, “It’s been almost 20 years that we are hearing of a violent regime that is unable to suppress a group of people that would not commit a single violent act.”

“The secret of how they've stood firm for almost 20 years against such a brutal persecution is that they succeed in not letting fear, struggle, and violence penetrate their hearts, and they are able to keep in their hearts only Truthfulness, Compassion, and Forbearance.” 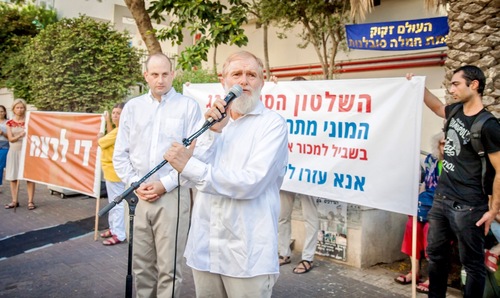 Rabbi David Schpitz explained why the Jews in Israel should care about what happens in China: “The Jewish people in the Egypt exodus brought the message of freedom to the world. Ancient Egypt is a symbol of slavery—slavery of humans who enslaved other humans. Today, unfortunately, we see this slavery in China. 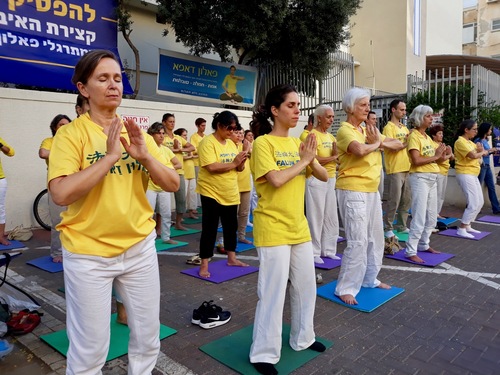 Practitioners do the Falun Dafa exercises in front of the Chinese embassy in Tel Aviv.

Demonstrating the Falun Dafa Exercises at the “Habima” Theatre Plaza

On Saturday, three days prior to the rally in front of the Chinese Embassy, practitioners gathered on the plaza in front of the Habima Theatre in Tel Aviv to demonstrate the Falun Gong exercises and tell passersby—culture seekers, young people, and tourists—about the persecution of Falun Gong in China. 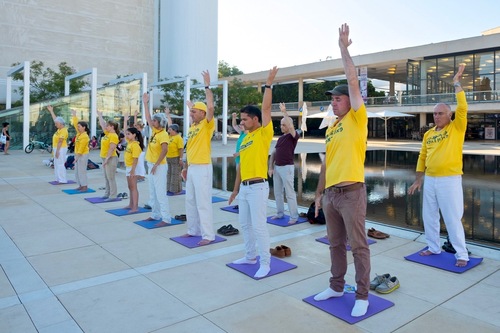 Demonstrating the Falun Dafa exercises in front of the Habima Theatre

The event took place at twilight, when some city residents go out with their children to play in the main plaza in front of the theatre before sunset. The practitioners’ exercise demonstration created a harmonious and soothing atmosphere. As audience members left the theatre, they came to ask about Falun Dafa, where they could learn the exercises, and about the persecution in China. Many people took leaflets and paper lotus flowers. 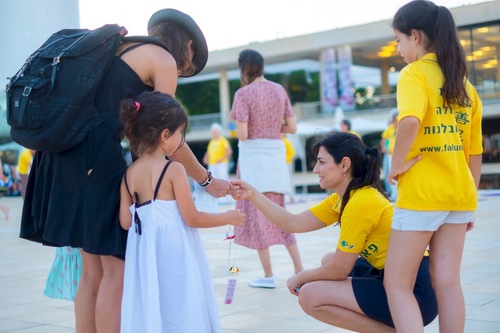 Practitioners hand out lotus flowers and pamphlets with information about the practice and the persecution.