Young Practitioner in Argentina Follows Dafa Teachings in His Job

(Minghui.org) I am a 23 year-old practitioner from Argentina. I have been practicing Falun Dafa for a year and a half. I work in a restaurant where all the employees are Dafa practitioners.

The restaurant is a place for cultivation. We make a concerted effort to prepare good and healthy food, and pay great attention to detail in all aspects of running the restaurant. We also talk about Falun Dafa to all of our customers and clarify the truth about the persecution that Dafa practitioners are suffering in China today.

I spend most of the day working at the restaurant, and sometimes even work double shifts to cover for a co-worker, or we stay late, thoroughly cleaning up so that the morning shift can start the next day with a clean kitchen.

In the past, I would have demanded more pay for every extra minute I worked, but now I have never asked for a cent more, because I follow Master's teachings:

“Since studying Falun Dafa, these workers have been coming to work early and going home late. They work very diligently and will do any assignment their supervisor gives. They also no longer compete for personal gain.” (Lecture Four, Zhuan Falun)

We opened a new restaurant in another country this year, in a good area, to reach the people who can go see Shen Yun Performing Arts. It was a truly arduous effort to achieve this, since we have just five cooks – three for the morning shift and two on the afternoon shift – we now have the same number of cooks with two restaurants during the busy holiday season. We have worked double shifts every day for three months. 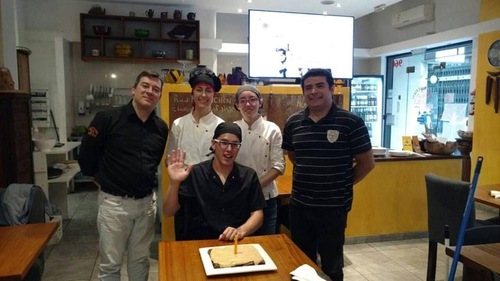 Customers often arrived when the kitchen helpers had already left, so I would find myself running around the kitchen so that the dishes would come out at the same time. It was really hard. I constantly asked Master to guide me, and the power of Dafa always manifested… Suddenly spoons would appear where I put my hand or the rice would be made much faster than normal, along with many other amazing things that occurred. I think this kind of help appeared because my heart was focused on doing a great job for the people, so that they had good meals, on-time. Also, people come to know the beauty and goodness of Falun Dafa in all our actions at the restaurant, so it is very important that we do a good job.

For instance, a family from another country came to eat at the restaurant one day. They told us that their son had been sick with a stomachache for several weeks but had recovered after they ate at our place. So, they came every day for a week, for lunch and dinner. They saw that we all worked hard all day, and listened to our stories about how Dafa improved us both physically and morally. They decided to take a copy of the book Zhuan Falun, so that they too could learn Falun Dafa.

At the end of my month at the other restaurant, Shen Yun arrived in Argentina. We prepared the meals for the entire company – almost 80 artists. Before traveling back to Argentina to start cooking for them, I thought I would be able to rest a bit that day and then continue cooking, but before arriving I had already been assigned to distribute invitations which took me all morning. Then it was time to go to work. I worked from 8 a.m. until very late at night. During the first few days it was so hot that from the moment I got up until the end of the day I was sweating. We had two kitchens, the restaurant and another kitchen to cook for the company upstairs, so I went up and down from the basement to the second floor all day to help, and to manage the production.

In my mind, I occasionally thought about giving up and resting a little bit. I felt that I was under too much pressure, and that three months without a single day of rest was too much for me. My body hurt constantly, and as soon as we took the food up for the company, a steady flow of customers entered the restaurant. I asked Master for help, to give me strength and to help me not give up. I knew that if I left the job my co-workers would have to do my part. I knew that I could not give up and that if I managed to overcome the tribulation I would increase my tolerance, which would be something I would remember with joy.

In this stressful situation, I was able to think about others and how my actions would impact them, instead of thinking only about myself and following my selfish desires. I could only do this because of Dafa's teachings, which guide me to be a selfless and generous person, willing to make the extra effort for others in difficult times. 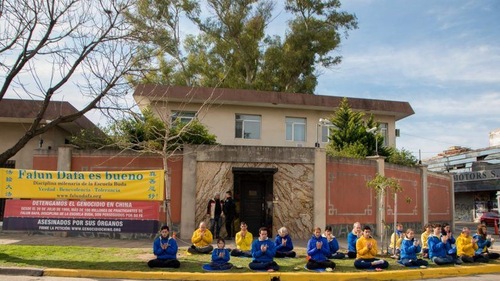 I would like to thank my fellow practitioners because without their support, effort, and sacrifice, I could not have achieved all this. At the same time, we have achieved greater unity and harmony among ourselves after these events, thanks to the coordination that occurred even in the most difficult moments. In addition, other practitioners supported us at all times and gave their time and their best efforts in this important project.