(Minghui.org) Today's news from China includes incidents of persecution that took place in 11 cities or counties in 8 provinces. According to this report, 12 Falun Gong practitioners were subjected to mistreatment during their detention, and at least 11 were illegally arrested. 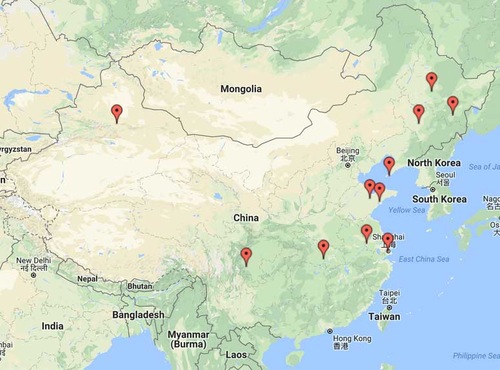 Ms. Liu Junxia was arrested by officers from the Huadian Town Police Station in Jian City on March 5, 2018, for filing a criminal complaint in 2016, against Jiang Zemin, the former Chinese Communist Party leader.

The Jian City Procuratorate filed Ms. Liu's case with the Jian Court on May 21, 2018.

Ms. Zhang Jianying, Ms. Zhu Suyun, Ms. Hu Ruifang, and Ms. Zhao Shuqiong were arrested on June 17, 2016. They were sentenced by the Leshan City Intermediate Court on May 30, 2018, after four trials.

Ms. Ju, an employee at the Anqiu City Environment Protection Bureau, was arrested in a bus station, when on her way to see her daughter in Qingdao City.

Practitioner Yu from Jingezhuang, Anqiu City was arrested at home on the evening of May 31, 2018. The officers extorted 150 yuan, claiming to be for a physical exam fee.

Ms. Wang Yunguo from Dayan Village, Buzhuang Town, Changyi was arrested by officers from the Xiaying Town Police Station on February 12, 2018, after being reported for talking to people about the persecution of Falun Gong. The police and Cao Shuwen, an agent from the Changyi 610 Office, ransacked her home. They confiscated paper bills with Falun Gong messages written on them.

Ms. Wang was allowed to return home early the following morning, but was arrested again the next day, and released at around 8 p.m. She was harassed at home another two times.

Ms. Wang Xiuzi from Dayan Village, Buzhuang Town was arrested by officers from the Kuiju Police Station on the afternoon of April 24, 2018. Police ransacked her home on the morning of April 25. She was held in a detention center for 15 days.

Two plainclothes officers from the Beiguan Police Station in Gaomi City went to Ms. Li Hongxiang's home to harass her on the morning of May 19, 2018. Ms. Li was not home at the time. Three officers from the Beiguan Police Station went to her place again on the morning of June 6. They arrested Ms. Li, ransacked her home, and confiscated her Falun Gong books, and other personal belongings.

Ms. Li saw two other arrested practitioners at the police station. The male practitioner was tied to a metal chair and locked in a cage. Ms. Li was released in the afternoon after the police extorted 3,000 yuan from her family.

Mr. Huang Genji was arrested at his home on June 6, 2018, by officers from the Jimo City Police Department and Tianheng Town Police Station. The officers ransacked his home, confiscated his Falun Gong books and materials, a printer, two computers, and other personal belongings.

Mr. Huang was taken to the Jimo Detention Center.

Practitioners in the Xinshi District have been continually harassed since the 19th Congress of the Communist Party of China, held in October 2017. More than a dozen practitioners have been held in a forced labor camp, including Mr. Ma Chao, Ms. Hualing, Mr. Lu Shixiang, Mr. Zhou Changqing, Xu (surname).

Mr. Ma is a senior engineer at the Xinjiang Environment Monitoring Terminus. He was taken to a forced labor camp by his employer in 2017.

Ms. Ye Mingyun, 55, was arrested at her home by four officers from the Taishan Police Station on the evening of May 24, 2018. The officers ransacked the place and recorded their actions, but they could not find any incriminating materials.

Ms. Shen Xigui from Xiliuhe Town was arrested by officers from the Xiliuhe Police Station on June 7, 2018. She was taken to the Xiantao City Detention Center.

Ms. Zeng Deyun was arrested at her home by officers from the Domestic Security Division on the afternoon of June 5, 2018. Her home was ransacked and her computer and Falun Gong books were confiscated.

Ms. Zeng was interrogated in the Jiangnan Police Department, and then taken to a detention center at around 5 p.m. She was released after failing the physical exam.

Ms. Lu Fengxian from the Beilin District was arrested by Heihe City Domestic Security Division officers on June 8, 2018. Several other practitioners from Heihe were also arrested.

Ms. Wang Shufang, 63, was sentenced to three years in prison.