(Minghui.org) Today's news from China includes incidents of persecution that took place in 14 cities or counties in 8 provinces. According to this report, 12 Falun Gong practitioners were subjected to mistreatment during their detention, and at least 10 were illegally arrested. 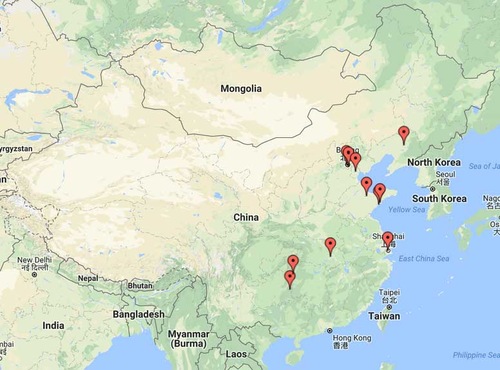 Ms. Zhang Huiying, 69, from the Sun Star City, Chaoyang District, was arrested in May 2017. Her home was ransacked on May 24.

Ms. Zhang was taken to the Chaoyang Detention Center, but later, the officials there claimed that there was no one by that name at the facility. Her whereabouts are currently unknown.

3. [Beijing] Ms. Fu Yunman Passes Away Due to Persecution

Ms. Fu Yunman, 72, from Datun Village, Gaoling Town, Miyun District, was taken to a forced labor camp in 2007. She was harassed many times after being released, by officers from the District Domestic Security Division, 610 Office, and the local police station.

Ms. Sun Xuezhen's home was ransacked by officers from the Jixianli Police Station, Beichen District, on June 1, 2018. The officers confiscated a dozen Falun Gong books, photos of the founder of Falun Gong, and a computer.

Ms. Cai Ying, 48, a translator, was arrested by officers from the Taipinglu Police Station on April 26, 2018. She was taken to the No. 2 Pudong Detention Center the following day.

Ms. Cai went on hunger strike and was force-fed. She passed away on May 8.

Mr. Wang Guohui, his wife Ms. Yu Chunli, their son, and Mr. Wang's mother, from the Duanjiazhuang Residential Community, Jihongtan Neighborhood, were arrested on the evening of June 1, 2018. Their home was ransacked.

Mr. Wang's mother and son were released the following day, while Mr. Wang and his wife were taken to the Jihongtan Police Station. They were then transferred to the Liuting Police Station.

Ms. Zhu Lihua was arrested by officers from the Pudonglu Police Station on June 3, 2018.

Ms. Liu Haiyan's home was ransacked by the local police, and staff from the Zhangjiawan Residential Community, Shuiguo Lake area, Wuchang District, on the morning of May 23, 2018. The officers found some Falun Gong books, and then arrested Ms. Liu.

Ms. Liu was interrogated, and taken to the Wuchang District Brainwashing Center on May 28.

Three practitioners were sentenced to prison. They appealed, but the Xiangxi Prefecture Intermediate Court upheld the original verdicts on April 27, 2018.

Ms. Liang and Ms. Yang were taken to the Changsha City Women's Prison in mid-May 2018. Mr. Guo's whereabouts are unknown.

Ms. Yang Jutao was arrested on May 30, 2018, and taken to the Chengxi Detention Center in Kaili City. Ms. Yang's mother was not allowed to visit her.

An officer from the Guguantun Police Station and three officers from the Fujin Police Department in Heilongjiang Province broke into Mr. Xu Zhong’s home in Xinzhuang Village, Guguantun Town, on the morning of June 3, 2018. He was taken to a hospital for a physical exam.

Mr. Xu had previously been arrested by officers from the Gujiatun Police Station on January 2, 2018. He was taken to a detention center, but was not accepted because of his age. He was then released.

Two officers from the Hailin No. 3 Police Station ransacked Ms. Chen Xitao's home on the night of June 3, 2018, and confiscated her computer.

Ms. Chen Xitao was taken to the Mudanjiang Detention Center on June 2, 2018. Her family refused to sign the detention warrant.

Ms. Chang Chengmei from Gengma Town, Gengma County, was arrested for distributing informational materials about Falun Gong in Gengma Town on the night of February 8, 2018. The police ransacked her home, but could not find any incriminating materials.

Ms. Chang was taken to the Gengma Detention Center.

Ms. Liu Weihong was arrested at her home by the Huanggu District police on May 24, 2018. Her home was ransacked and her Falun Gong books were confiscated.

Ms. Liu had previously been arrested for distributing Falun Gong brochures on April 8, 2014. She was held in the Shenyang Detention Center for 35 days.

Mr. Li Fubin and his wife Ms. Zheng Shu were arrested by officers from the Chengguan Police Department on September 3, 2016.

The couple appealed to the Lanzhou Intermediate Court, but the original verdicts were upheld in late April. Their case files were returned to the Chengguan Court.

Mr. Li and Ms. Zheng have been held for 21 months since their arrest.

Mr. Li was transferred to the Xinqiao Prison hospital in early May 2018. Ms. Zheng has been held in Xinqiao Prison for several months, and has high blood pressure.

Mr. Li Dayao was sentenced to four years in prison and fined 10,000 yuan on April 9, 2018, by the Jianli County Court. He was charged with “impeding law enforcement.”

Mr. Li Chunxin was sentenced to one year in prison on April 9. The court did not notify Mr. Li’s wife and daughter about the trial dates.

Mr. Li and his family have filed an appeal with the Jingzhou Intermediate Court.

“Teacher Clarifies the Facts to Students”

“My Granddaughter's Destiny Changed After I Let Go of Attachments”