(Minghui.org) From April to May 2018, more than one hundred elected officials in New York State, at the federal, state and city levels, have proclaimed or congratulated the 19th annual World Falun Dafa Day marking the 26th anniversary of Falun Dafa's public introduction. 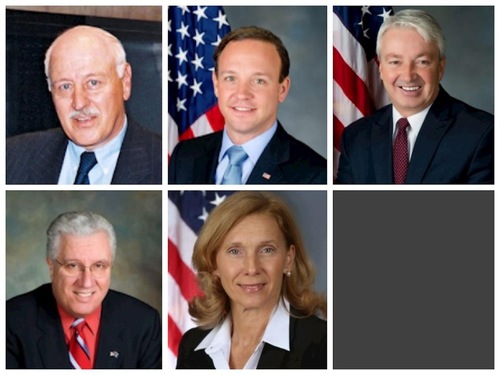 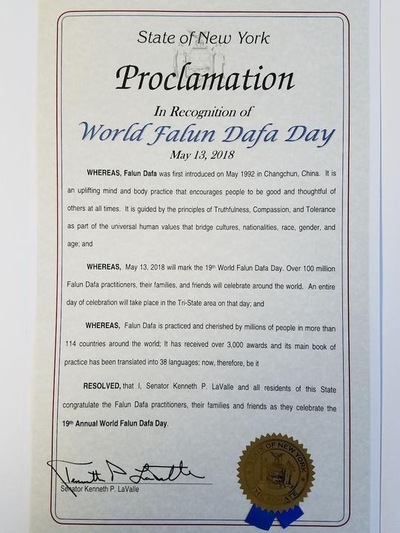 Senator LaValle's proclamation congratulated the World Falun Dafa celebrations and recognized that Falun Dafa “is guided by the principles of Truthfulness, Compassion, and Tolerance as part of the universal human values that bridge cultures, nationalities, race, gender, and age,” and, “Falun Dafa is practiced and cherished by millions of people in more than 114 countries around the world; It has received over 3,000 awards and its main book of practice has been translated into 38 languages,” 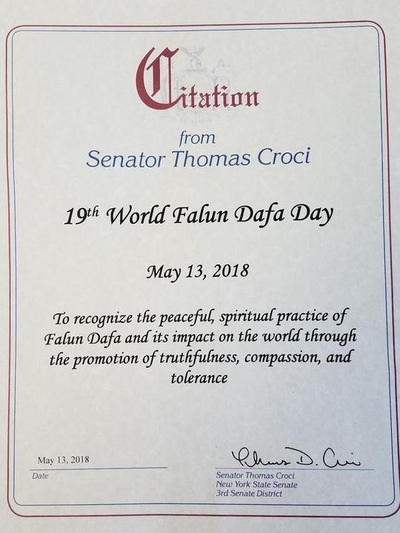 Citation issued by Senator Thomas Croci, recognizing “the peaceful, spiritual practice of Falun Dafa and its impact on the world through the promotion of truthfulness, compassion, and tolerance.” 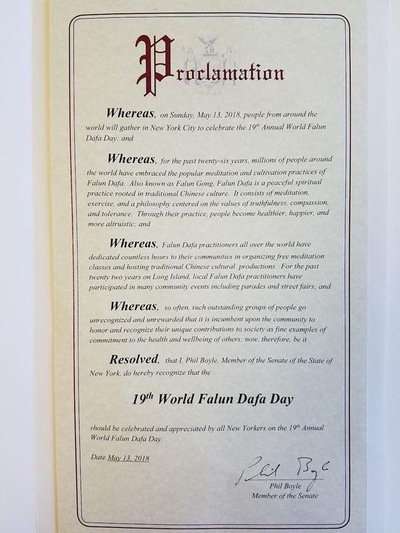 Senator Boyle's proclamation noted, “for the past twenty-six years, millions of people around the world have embraced the popular meditation and cultivation practices of Falun Dafa. Also known as Falun Gong, Falun Dafa is a peaceful spiritual practice rooted in traditional Chinese culture. It consists of meditation, exercise, and a philosophy centered on the values of truthfulness, compassion, and tolerance. Through their practice, people become healthier, happier, and more altruistic.” 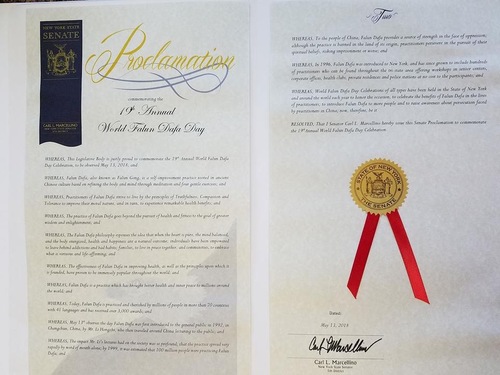 Senator Carl L. Marcellino of the 5th District wrote in his proclamation, “To the people in China, Falun Dafa provides a source of strength in the face of oppression; although the practice is banned in the land of its origin, practitioners persevere in the pursuit of their spiritual beliefs, risking imprisonment or worse...

“In 1996, Falun Dafa was introduced to New York, and has since grown to include hundreds of practitioners who can be found throughout the tri-state offering workshops in senior centers, corporate offices, health clubs, private residences and police stations at no cost to the participants...

“World Falun Dafda Day Celebrations of all types have been held in the State of New York and around the world each year to honor the occasion, to celebrate the benefit of Falun Dafa in the lives of practitioners, to introduce Falun Dafa to more people and to raise awareness about persecution faced by practitioners in China.” 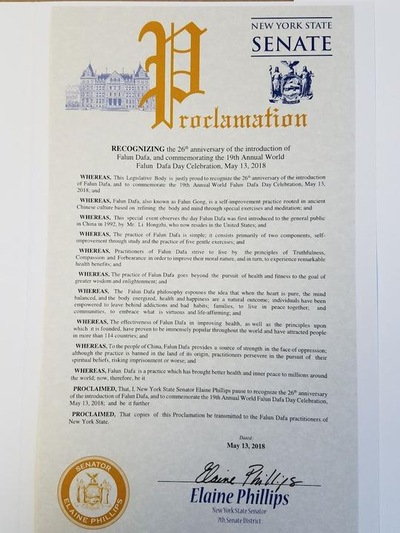 Proclamation issued by Senator Elaine Phillips for the 7th District.

Senator Elaine Phillips' proclamation recognized the great benefit of Falun Dafa, stating, “The Falun Dafa philosophy espouses the idea that when the heart is pure, the mind balanced, and the body energized, health and happiness are a natural outcome; individuals have been empowered to leave behind addictions and bad habits; families, to live in peace together; and communities, to embrace what is virtuous and life-affirming... 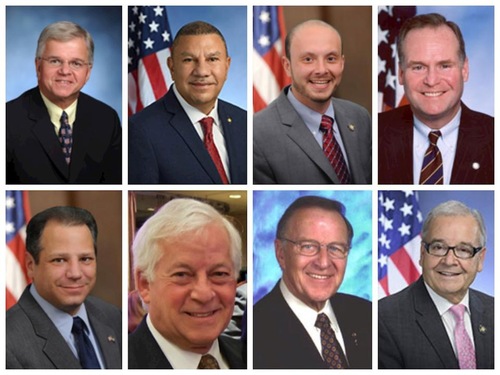 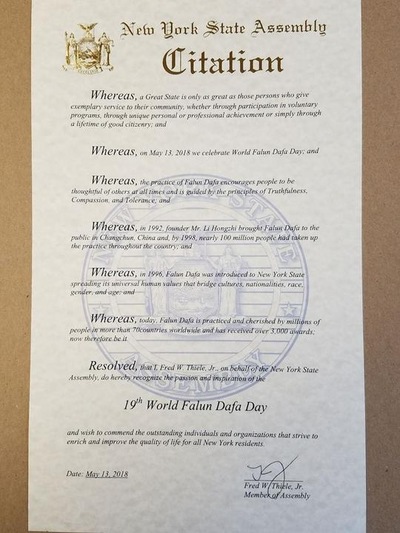 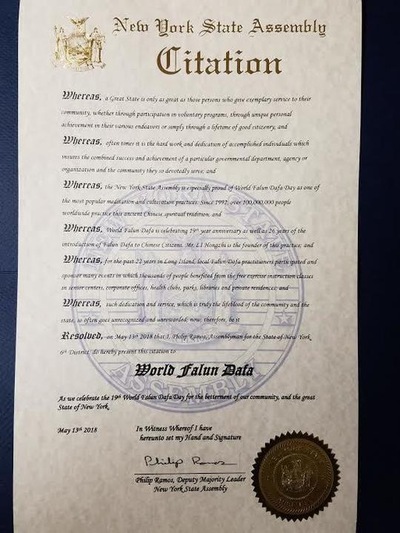 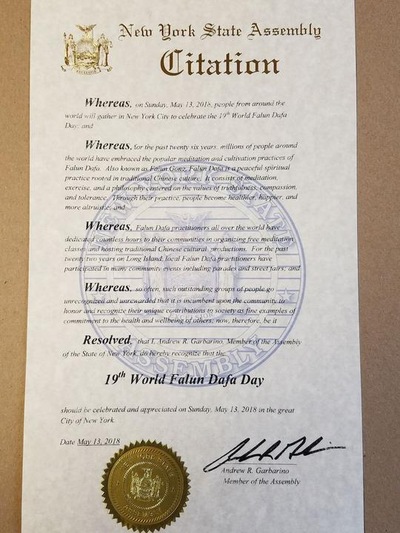 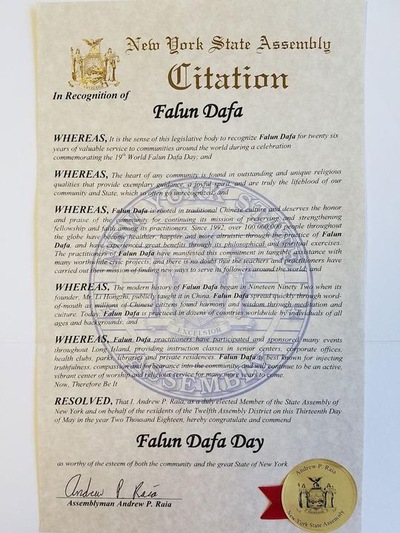 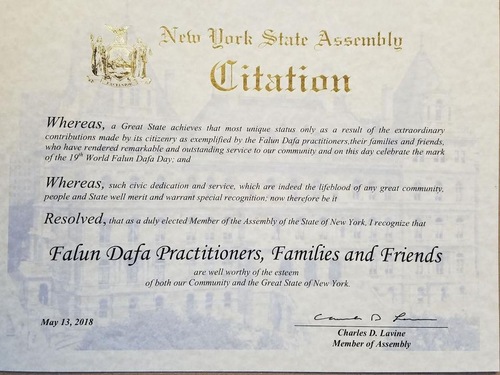 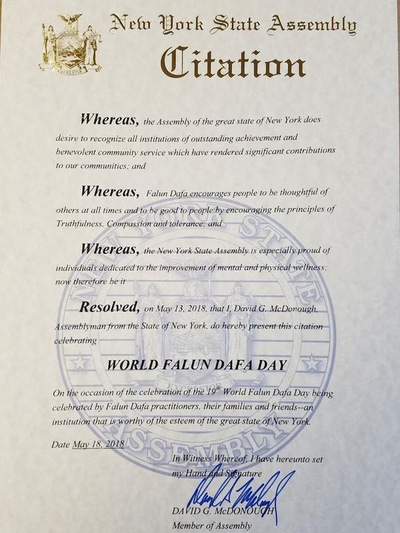 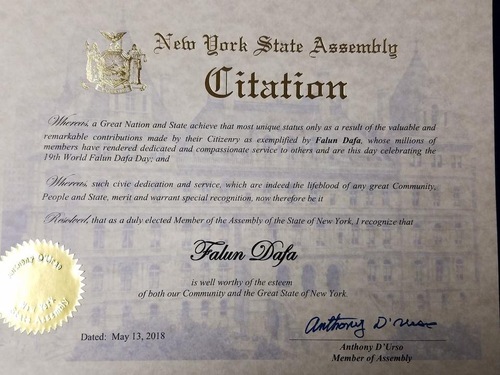 “My Cultivation Path in Singapore”