(Minghui.org) As the tourism season approaches, Falun Gong practitioners around the world hold many activities to inform tourists about the ancient Chinese self-improvement practice, and expose the ongoing persecution in China. This report covers three events recently held in Taiwan and Japan.

Cihu Lake, near the Taoyuan International Airport, is a famous tourist spot in Taiwan, and is often the first or last stop for Chinese tourists, who return home with Falun Gong practitioners' blessings. 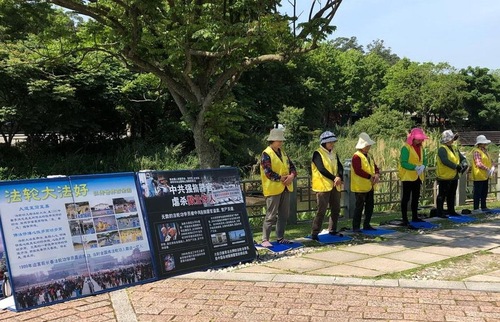 Practitioners demonstrate the exercises with gentle music, pass out flyers, and collect signatures on a petition that condemns the persecution. When talking with tourists from mainland China, practitioners have another important goal, helping them to recognize the evil nature of the Communist Party, and convincing them to quit the Party. 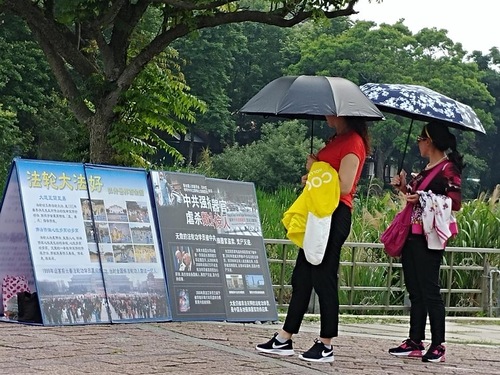 “Many people from mainland China didn't want to talk to us at the beginning,” Ms. Yang said, “but our secrets are patience and compassion. I truly want them to learn the facts. Nothing can frustrate me.”

“Patience and compassion can touch many people, who didn't want to talk to me at first,” she added, “So I am able to convince most of them to quit the Party.”

One day, a local couple saw the entire process of Ms. Yang talking to Chinese people. The husband gave her a thumbs-up and said, “Falun Gong is great! You have done so much for the fellow Chinese.”

Ms. Yang told the couple why she is doing what she does, and asked them to sign the petition. The couple was happy to have a chance to support Falun Gong's peaceful resistance.

Practitioners from Hiroshima participated in the 42nd Flower Festival on May 3, 2018, which was themed “Passing the message of flowers and peace to the world” this year.

According to the local media, more than 640 thousand people from around the world and 200-some groups attended the event. This was the 17th time that local Falun Gong performed at this annual event. 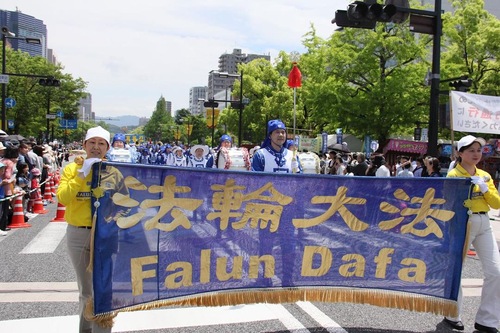 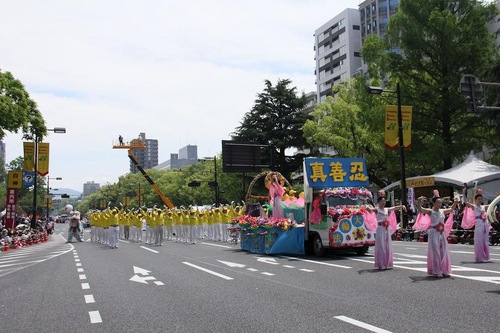 The Tian Guo Marching Band led the Falun Gong procession in the opening parade of the festival, and was followed by the exercise demonstration, fairy lady dance, and lion dance. After the parade, practitioners were invited to perform the traditional Chinese dances on the stage.

Many people were interested in learning the gentle exercises.

On April 22, practitioners from Kumamoto, Japan held protests in front of the Chinese consulates in Fukuoka and Nagasaki commemorating the 19th anniversary of the April 25th Peaceful Protest, and calling for and end to the 19-year-long persecution.

Practitioners also called for bringing Jiang Zemin to justice, who as the former head of the Communist Party, personally launched and directed the persecution. 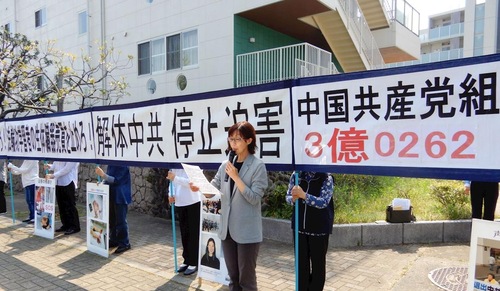 Protest in front of the Chinese consulate in Fukuoka. 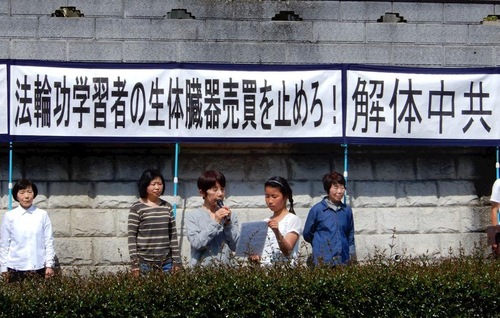 The practitioners' events were strongly supported by the local people. Many of them signed the petition condemning the persecution.