(Minghui.org) Falun Gong practitioners participated in the 52nd Maple Festival Parade in St. Albans, Vermont, on April 29, 2018, the final day of the three-day festival. Government officials, including the governor, watched the parade. This was the first year that Falun Gong practitioners joined this “Top Ten Honored Event” in Vermont. Their great performance received warm feedback. 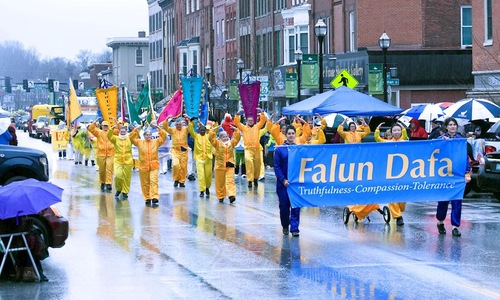 Despite a storm and sharply-dropping temperatures, the practitioners braved the chilly wind and rain in high spirits. Their great energy and benevolent style won warm applause from the spectators.

The parade started to the south, proceeded through the downtown area, and ended in the north part of town, with a duration of approximately 90 minutes.

Spectators were happy to receive Falun Gong introduction brochures. Some wanted to learn more about the practice online, and some said they planned to attend an upcoming introduction session at a local library.