Story of an Asian Restaurant in Argentina

(Minghui.org) A Falun Gong practitioner opened an Asian restaurant in Buenos Aires, the capital of Argentina, two years ago. Several practitioners also became employees. They have helped many people to know about Falun Gong.

The owner of the restaurant commented, “Because of its location in the downtown area, many of the customers are professionals, business owners, and of Chinese descent. We only use healthy ingredients and no MSG. Our premium food and high-quality service attracts groups of loyal customers.” 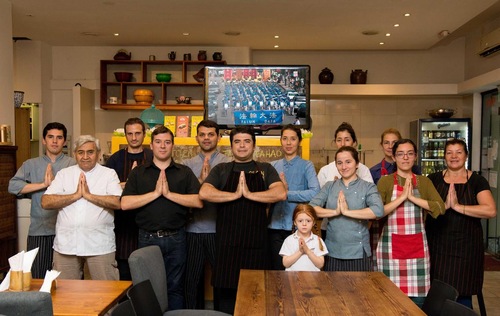 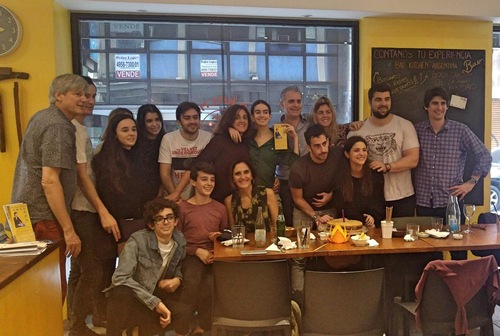 Doing Things with Our Heart

There are different stories occurring at the restaurant every day. Two women once came to the restaurant and they worked for a petroleum service company in Beijing to expand its business in Latin America. One of them was from Colombia and the other from Xinjiang. The Chinese woman was very satisfied with the food, saying that she would be staying in Buenos Aires and would visit our restaurant often.

In the beginning, I hesitated to talk with her about Falun Gong, thinking that she might not come again. But she kept asking and in the end I told her that I was a Falun Gong practitioner. Since her English was very good, I talked with her about the forced organ harvesting in China of living Falun Gong practitioners for profit, and then showed the English version of the book Bloody Harvest. Then I told her that two practitioners who came to Argentina one year earlier had been abused in China for their belief. One of them had been detained and tortured for nine years. The practitioners were hung upside down for several days while being beaten and shocked with electric batons.

I could tell the information was too overwhelming for the woman because she was shaking. Upon leaving, she took some materials, including a copy of the Nine Commentaries on the Communist Party, to follow up. She said that she had been to many countries and that this was the first time that she had talked with a practitioner.

A Chinese man of about 25 also came to eat. He was very talkative. He was surprised to learn that everyone working at the restaurant was a Falun Gong practitioner. He said that he thought Falun Gong practitioners were all crazy. I told him about Falun Gong and recommended some informational materials to him. He accepted them but was hesitant about the Nine Commentaries on the Communist Party. Thinking that this book was important for him to read, I convinced him to take a copy.

Before he left, he said that he had learned Falun Gong practitioners are good people and praised our food. I explained to him that it was because we all do things from our hearts.

Learning the Facts from Television

Many Chinese people come and eat at our restaurant, from regular employees, government officials, to tourists. Every week, we provide them with news from the Epoch Times newspaper. During the Shen Yun Performing Arts tours, we gave them Shen Yun brochures. In addition, we set up a large screen television in the dining hall, so that people could watch it as they ate. The password for the Wifi connection was “Falun Dafa is great,” which was a little surprising for them. Most of them nonetheless smiled and accepted it.

There is a big Chinese company not far away from us. The employees know that we are Falun Gong practitioners and they know our food is good. In the recent few months, however, few of them came to eat at our restaurant. We were told that their company opened two cafeterias that provided free food to employees. Once when their cafeterias were closed for a few days, our restaurant was busy with these employees. One of them said she wanted to go watch Shen Yun, but that the company had a policy that discouraged them from doing so. We were sad to hear this, and other customers in our restaurant also felt the same. They said this is an example of the Communist Party's infiltration into the Chinese community.

Chinese tourists and business professionals had various reactions when they heard about Falun Gong from us. Some would read or take materials and some would just listen. Most of them watched our television. One tourist took a copy of materials before leaving for China so that he could read it in his hotel. Another Chinese visitor visited us three times and left with materials and a copy of Zhuan Falun.

Once a group of Chinese sat at a table close to the television. It was early and there were no other customers in the restaurant. One of them turned off the television, but we turned it back on. He turned it off again and we turned it back on again, suggesting that he not change the setting. We explained that we have the right to play what we choose in our restaurant, and his friends said that he was being impolite. They enjoyed the meal and, by the time they left, some of them already had a positive attitude towards Falun Gong.

Another time a car racing team from China came and they were glad to see programs about Falun Gong on the television. They said they liked the energy here and even cheered for Falun Gong. One of them lived in Canada with relatives from Changchun, China, who are practicing Falun Gong. He showed us the exercises and the entire group was thankful for Mr. Li Hongzhi's introduction of Falun Gong to the public.

Many customers seem to like us not only because they enjoy the food, but also because they like the environment. One of them is the former head of the National Security Agency whose office is close by. He said his stomach problems stopped since he started to eat here.

An antique store owner sometimes eats here with two of his adult children. He often orders fried chicken with rice, although fried food is normally considered not ideal for people with chronic stomach issues. He said his stomachache disappeared after eating here. Sometimes he also ordered extra to bring back home for dinner.

We maintain a tight control on quality. For example, we only use organic chicken and fresh oil. The bread is also baked fresh daily, including making the dough, steaming, and baking. We hope the high quality and the positive energy of the practitioners will benefit our customers.

Because we discipline ourselves with the principles of Truthfulness-Compassion-Forbearance, many customers are impressed by our food and service. Some from Brazil, Miami, or even Taiwan suggested that we open stores there, saying that we would continue to be successful there. We explained to them that the credit for our work should go to Falun Gong.

In these two years, a large number of customers have learned Falun Gong from us. Some are interested in reading more, some have been to group exercises to learn the movements, and some have bought copies of Zhuan Falun.

Working in the restaurant is very demanding, especially when there are lots of customers. We need to act quickly, achieve good results, and work long hours every day. Other restaurant owners complain about managing restaurant employees, and employees are unhappy with low pay for intensive work. In addition, when someone is sick, another person has to take on more work. There are also issues of mistrust and theft.

But in our restaurant, each of us is an exemplary worker because we follow the principles of Truthfulness-Compassion-Forbearance. In Zhuan Falun, Master quoted a factory manager's words:

“Since studying Falun Dafa, these workers have been coming to work early and going home late. They work very diligently and will do any assignment the boss gives. They also no longer compete for personal gain. By doing so, they’ve made the whole factory take on a new look, and the factory’s economic returns have also improved. Your practice is so powerful. When is your teacher coming? I’d also like to attend his lectures.”