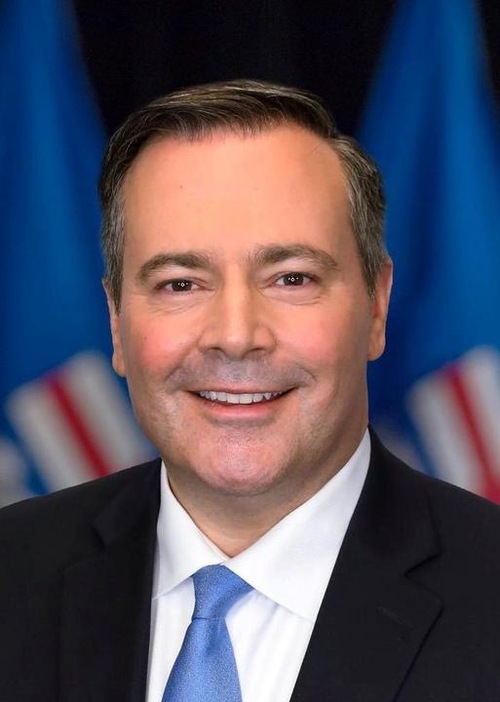 Jason Kenney, Member of the Legislative Assembly (MLA), is also the current leader of the United Conservative Party in Alberta.

Jason Kenney, Member of the Legislative Assembly (MLA) and current leader of the United Conservative Party in Alberta, said Falun Dafa's principles of Truthfulness-Compassion-Forbearance have benefited Canada and the world tremendously. He is aware of the persecution of Falun Dafa by the communist regime in China and praised practitioners' efforts to promote peace despite the harsh suppression. 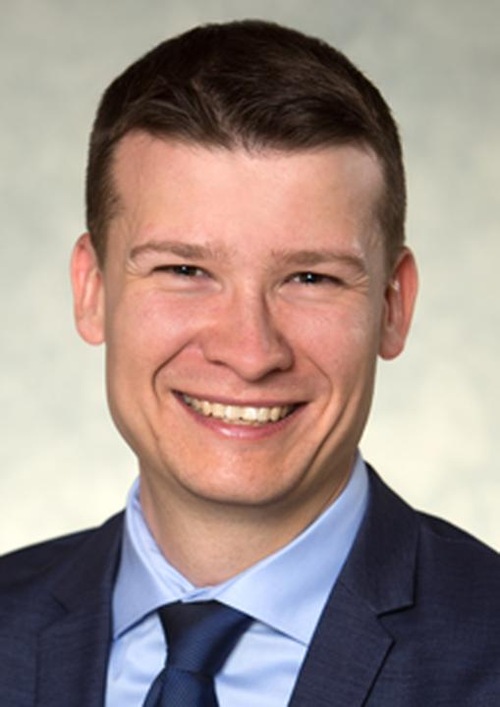 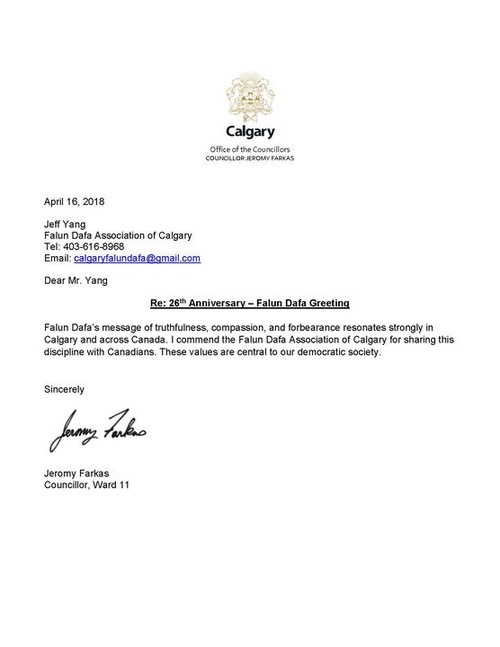 Jeromy Farkas, Calgary City Councilor who represents Ward 11, said Falun Dafa's message of Truthfulness, Compassion, and Forbearance resonates strongly in Calgary and across Canada. “I commend the Falun Dafa Association of Calgary for sharing this discipline with Canadians. These values are central to our democratic society,” he wrote. 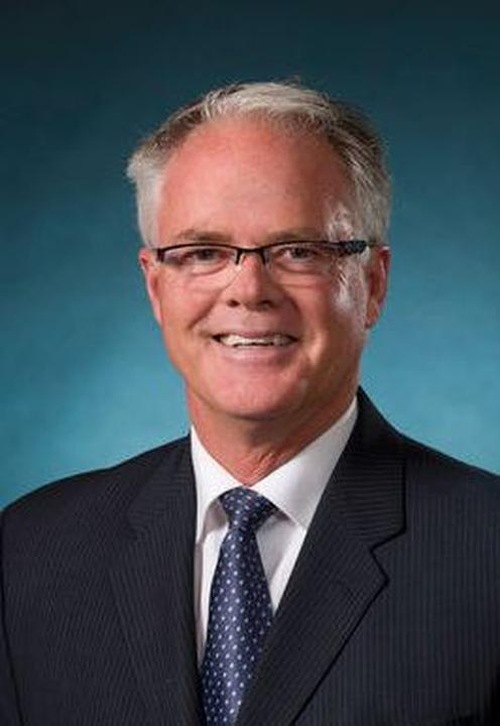 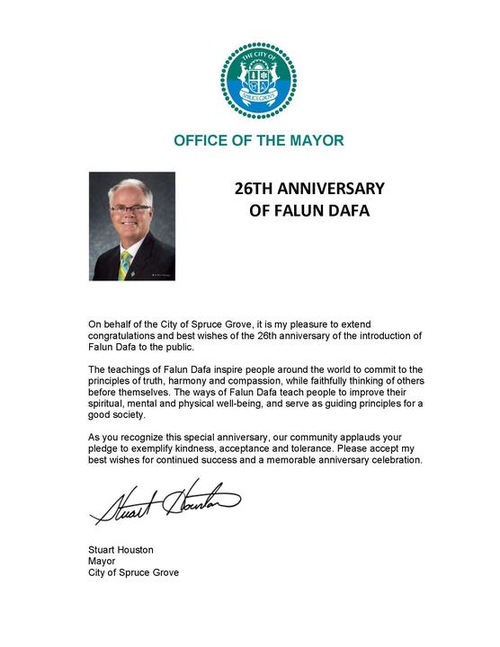 Stuart Houston, mayor of Spruce Grove, said the teachings of Falun Dafa inspire people around the world to commit to the principles of truth, harmony, and compassion while faithfully thinking of others before themselves. “The ways of Falun Dafa teach people to improve their spiritual, mental and physical well-being, and serve as guiding principles for a good society,” he wrote. 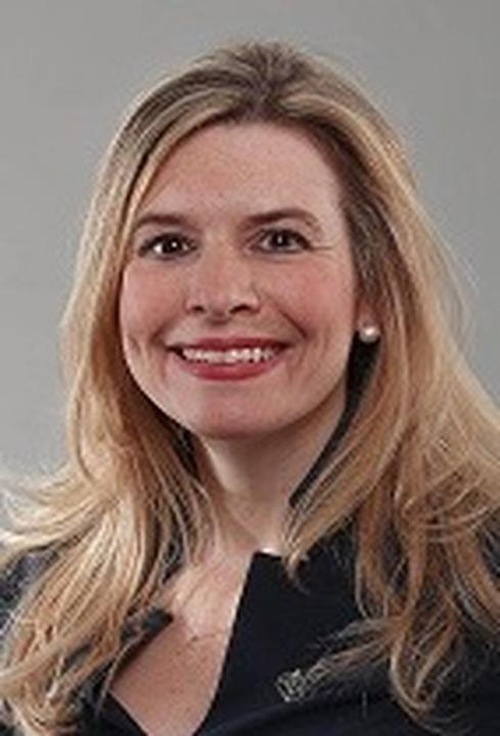 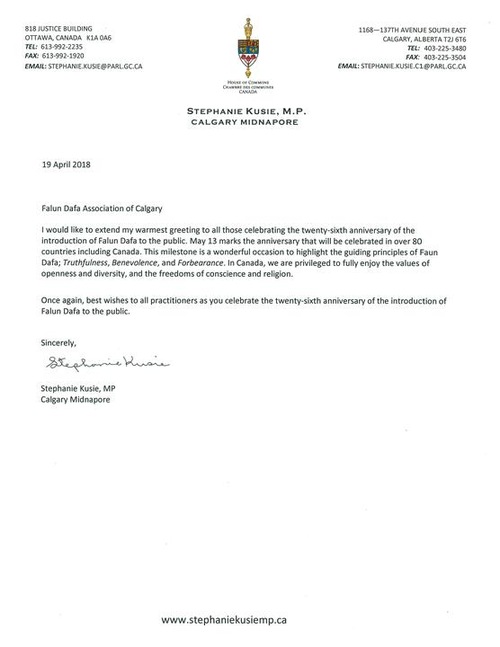 Stephanie Kusie, Member of Parliament representing the electoral district of Calgary Midnapore, wrote in her letter, “I would like to extend my warmest greeting to those celebrating the twenty-sixth anniversary of the introduction of Falun Dafa to the public…. This milestone is a wonderful occasion to highlight the guiding principles of Falun Dafa; Truthfulness, Benevolence, and Forbearance. In Canada, we are privileged to fully enjoy the values of openness and diversity, and the freedoms of conscience and religion.” 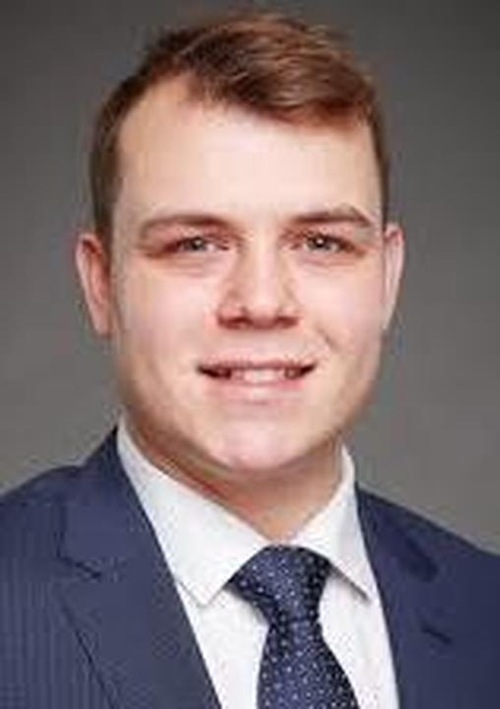 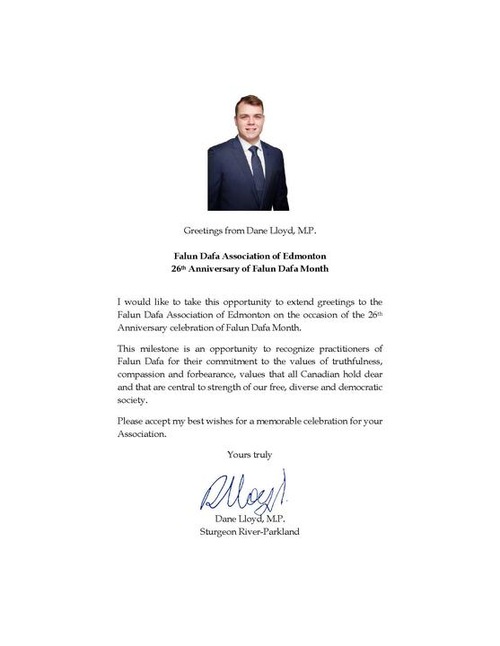 Dane Lloyd MP represents the electoral district of Sturgeon River—Parkland. He wrote in his greeting, “This milestone is an opportunity to recognize practitioners of Falun Dafa for their commitment to the values of truthfulness, compassion and forbearance, values that all Canadian hold dear and that are central to the strength of our free, diverse and democratic society.”

“Being Careful with Comfortable Environments and Unconscious Habits”