(Minghui.org) Falun Gong practitioners and supporters in Quebec, Canada, held a rally and parade in Montreal's Chinatown on March 31, 2018. They celebrated the 300 million Chinese who have withdrawn from the Chinese Communist Party (CCP) and its affiliated youth organizations, as registered on the Epoch Times' Tuidang [quitting the CCP] website as of March 22, 2018.

They encouraged the Chinese who had not yet done so to recognize just how evil the CCP is and to distance themselves from it by quitting. The event was warmly received. 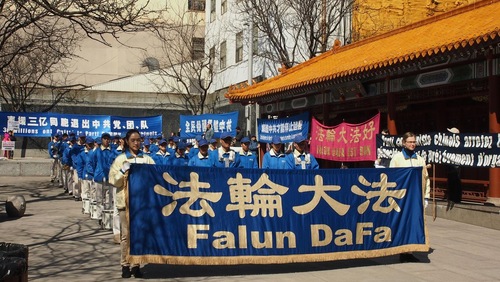 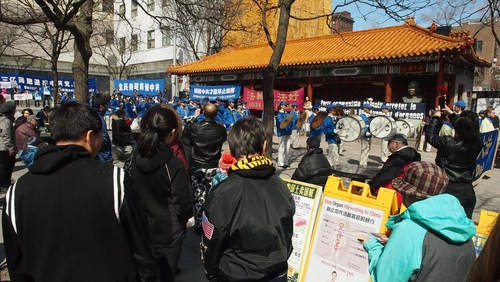 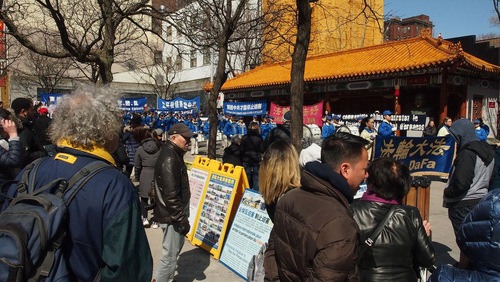 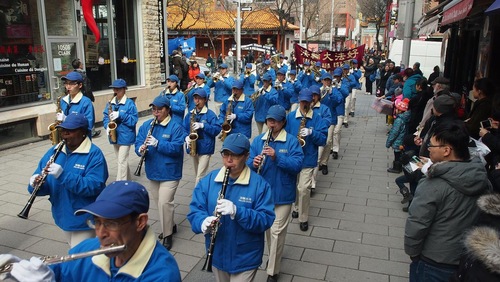 The Tian Guo Marching Band leads the parade through Chinatown in Montreal.

The rally began at noon on Saturday, heralded by a performance by the Tian Guo Marching Band. Crowds of people walking in Chinatown were drawn by the music and gathered around. Organizers and Falun Gong practitioners spoke at the rally in Mandarin, Cantonese, French, and English as the spectators listened quietly and attentively.

Spokesperson John Halas remarked, “The 300 million Chinese people who have withdrawn from the CCP is a declaration that people are awakening and exposing the Party's persecution of Falun Gong.”

Falun Gong, also known as Falun Dafa, is an ancient spiritual practice centered on the values of Truthfulness-Compassion-Forbearance. The CCP, led by former head Jiang Zemin, launched a persecution campaign aimed to eradicate the practice in July 1999 and is still being enforced today.

Public Support for Raising Awareness of the Persecution

One woman said that she had seen Falun Gong practitioners doing the exercises and talking to people about the benefits of the practice and the brutality of the persecution for years. She said she could feel strong energy every time she passed them, which made her feel calm and comfortable. She condemned the persecution in China. "I support them (Falun Gong practitioners)!" she said. She also said that the Canadian government should voice its concern and help stop the ongoing persecution of Falun Gong by the Chinese regime.

Sinchez-Correr, a student from Quebec, listened to a practitioner tell how the CCP kills Falun Gong practitioners for their organs. He said that, after returning to school, he would collect signatures to oppose the live organ harvesting so that more people would know that the Party was doing such a horrible thing. He said, “I had learned about forced organ harvesting in China from a Youtube video, but I didn't know what I could to help. Now I think I can hold activities in school. I'm a member of the student union and I can find the person in charge to collect signatures. We can do it at the school gate and ask everyone to sign.”

Chinese: “I Quit Long Ago”

Several Chinese who were watching the rally said they had quit the Party long ago. Mr. Huang, who immigrated from China, said that the CCP has killed many Chinese people during its many political campaigns but that it can not eradicate Falun Gong. "Falun Gong is remarkable! Falun Gong is the only hope of China," he said.

Another Chinese who did not want to reveal his name also said that he had quit the Party long ago. He was impressed by the rally and said, "This is really amazing. It would be unimaginable inside China."