(Minghui.org) Falun Dafa practitioners in San Francisco participated in the 27th Annual Union Street Easter Parade & Spring Celebration on April 1, 2018. The popular family-oriented event showcases the attractions and diversity of the Bay Area's Union Street neighborhood, and the Falun Dafa entry was one of the bright spots in this vibrant celebration. 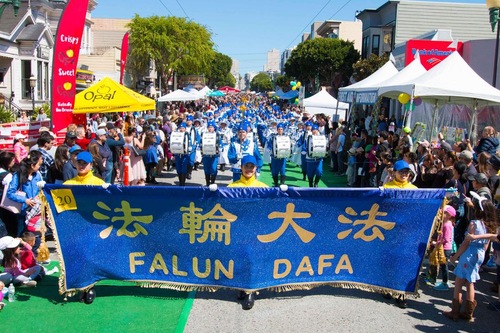 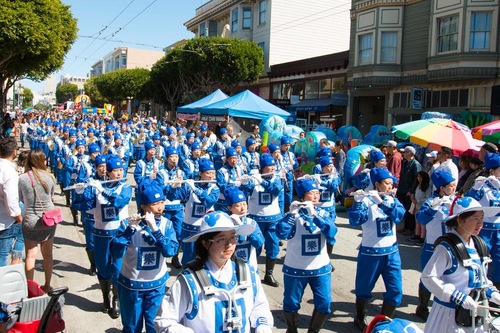 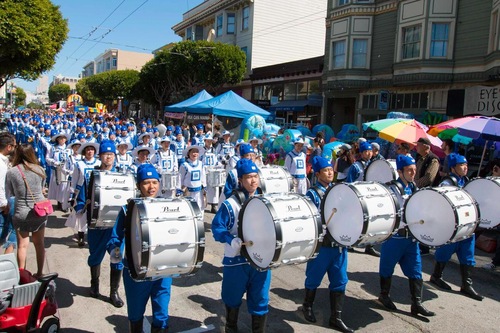 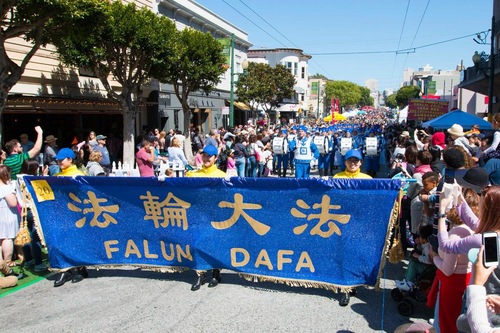 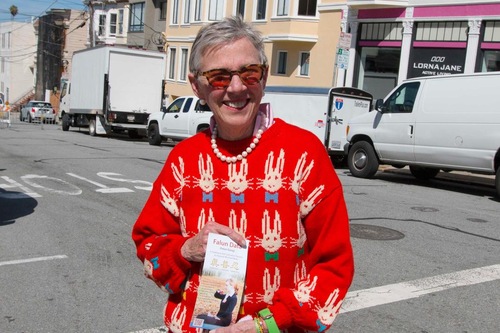 Eleanor Carpenter, President of the Union Street Association, thanked practitioners for taking part in the parade again this year.

Ms. Carpenter added that she planned to practice Falun Dafa herself, in order to reduce the stresses associated with being a business owner. 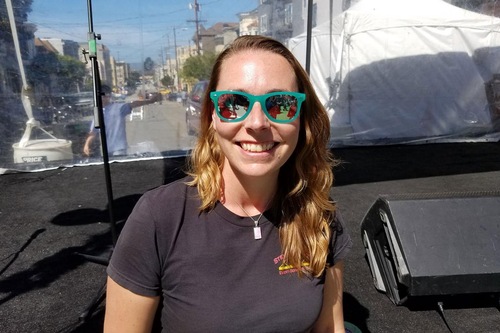 Sarah Tipple, program manager for the parade, hopes that the practitioners will take part in the parade every year.

Sarah Tipple, program manager for the parade, said that she was happy to see the practitioners again this year. She said the Tian Guo Marching Band is her favorite, noting in particular the beautiful music and unique band uniforms. Ms. Tipple added that she sincerely hopes that Falun Dafa will be a part of the event every year. 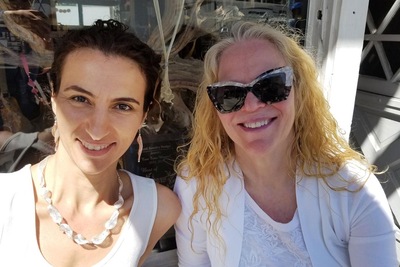 Business owner Semrha Durak and her friend Nola Anderson were impressed by the practitioners' performance. Ms. Durak said that it brought back fond memories of playing in her high school marching band. “I see this performance every year and enjoy it a lot,” she said. “The band members are of different ages and they work so well with each other – seamlessly.”

Her friend Ms. Anderson said that this was her first time to hear the Tian Guo Marching Band. She loved the music and thought the message was wonderful.

Local resident Peter Schildhause took lots of pictures of the practitioners. “I could feel the energy in the performance. The music is mesmerizing, with awesome melody. It's really great!” he remarked.

Mr. Schildhause's wife said that she had heard about Falun Dafa and the persecution in China. “I think people should have the freedom to practice their belief,” she said.

Jiang Wenjun, one of the practitioners who carried the large banner at the front of the parade, said that she was happy to take part in the event again this year. “We had a great day today! I remember that it was raining hard last year,” she said. “But no matter what kind of weather we have, it is always wonderful to see people enjoying our band and [Falun Dafa's] principles of Truthfulness-Compassion-Forbearance.”

“With Faith in Master and Dafa, I Looked Within to Overcome a Tribulation”