(Minghui.org) The Lantern Festival which marks the official end of the Chinese New Year celebration falls on March 2 this year. Besides eating sweet rice balls, one important tradition of this festival is to enjoy the variety of lanterns.

Falun Gong practitioners from Chiayi, Taiwan, brought a giant lantern boat as well as two dozen lantern statues to the local lantern expo that is being held from February 16 to March 11, 2018. 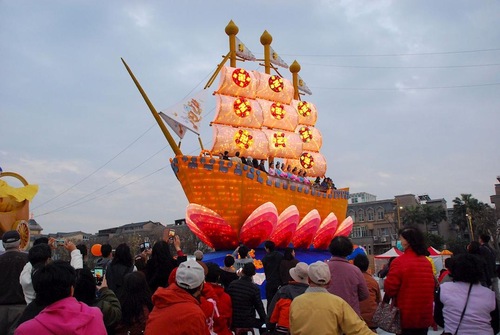 Giant lantern boat made by practitioners.

The boat was surrounded by the lanterns, and practitioners on the boat demonstrated the Falun Gong exercises and performed traditional Chinese dance. Besides the boat, there was also a globe lantern signifying that Falun Gong is practiced around the world. 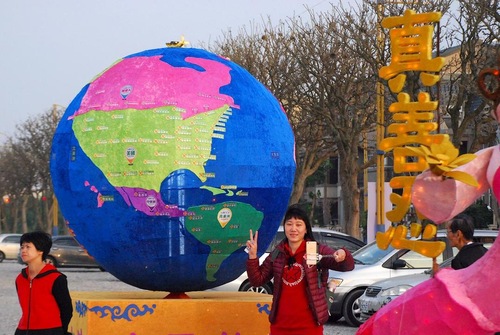 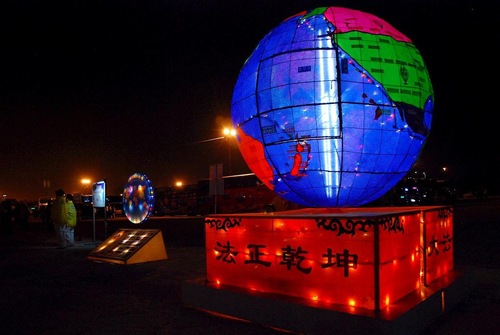 The globe lantern signifies that Falun Gong is practiced worldwide.

The visitors were amazed by the enormous boat. Mr. Li from Taoyuan said excitedly, “I've seen many lanterns, but I have never seen such a big one. I am lucky to get on the boat to enjoy the lanterns. This is a symbol of good luck. Thank you, Falun Gong.” 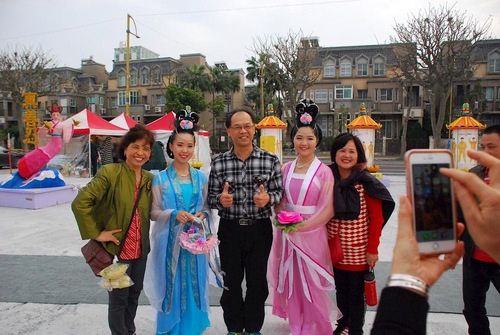 A woman from Kaohsiung was impressed by the Falun Gong lanterns. A practitioner told her, “The giant lantern boat is a symbol of returning to traditional culture. We, Falun Gong practitioners, made it with our hearts, in hopes of bringing blessings to visitors.”

Next to the boat was a large screen which showed a preview of the Shen Yun Performing Arts. Practitioners passed out Falun Gong flyers and demonstrated the exercises in the lantern matrix.

Mr. Li from Taoyuan asked practitioners, “Why does the Chinese Communist Party persecute such a peaceful and beautiful practice?”

A practitioner told him that the guiding principles of Falun Gong, Truthfulness-Compassion-Forbearance, is opposite of the communists' violent philosophy.

Mr. Li was shocked to learn of the brutality of the persecution of Falun Gong in China, including forced organ harvesting. The peaceful resistance of the practitioners made him even more interested in learning about the practice.

“My Understandings of Tears in Master's Portrait”